The story of the world’s finest linen 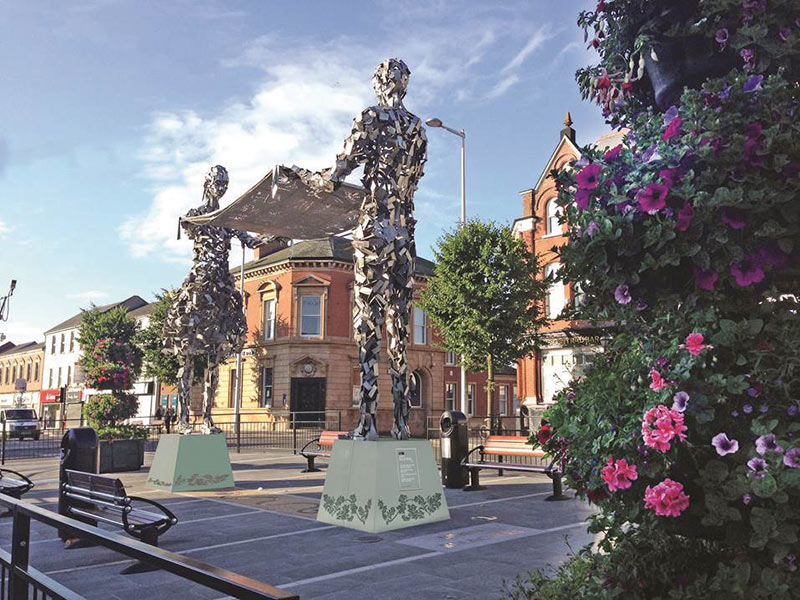 When the American Civil War brought an end to Irish cotton imports in the 1860s, the local linen industry, still largely composed of hand loom weavers, went into overdrive to take advantage.

Within a relatively short period, Irish linen was the world’s most famous and Banbridge was at the heart of the increasingly mechanised industry.

One early entrepreneur was Thomas Ferguson from the village of Clare, not far from Banbridge. Orphaned as a youth he had learned the trade from the remarkable Brice Smyth, a blind handloom weaver of renown and founder of Banbridge’s famous Brookfield Linen Mill.

Not long after the Civil War ended, Ferguson acquired a 999 lease for the site on which his company operated until recent times – the Edenderry Works, just around the corner from their present factory. Soon mechanised with the latest equipment, Ferguson’s Damask linen became a byword for quality around the world. The company would remain within the Ferguson family until 1988. Today, you can take an enthralling tour of Fergusons, the last maker of quality Irish Damask linen, considered the world’s finest linen, to see how it is created. And, although technology has transformed the efficiency of the process, it is essentially the same as during the golden age of linen, says Nigel Spiers, who conducts the tours of Fergusons.

The intricate design, once printed out on cards and laboriously inputted into the looms, is now directly transferred from computers, cutting out human error and many man hours.

Linen yarn, notoriously brittle, needs constant moisture at the weaving stage to keep it pliable. With the heat created by the great looms this creates a very humid atmosphere. In the early days of mechanised linen manufacture, barefoot employees trod floors covered in water, ingested flax fibres that led to terrible chest conditions and nearly passed out with the humidity.

Today, vacuum cleaners absorb the fibres, machines control the humidity and the floors are dry as a bone. But the yarn is still fed into the looms in much the same way and there remains something magically hypnotic about watching the clattering looms gradually recreating the beautiful designs. From the weaving department the linen, once despatched to local bleaching mills, is now sent to Portugal to be returned pristine white. Then it is the turn of Ferguson’s skilled seamstresses, working on vintage sewing machines, including Singers from the Victoria era, to hem and stitch the Damask linen into the sheets, handkerchiefs, tablecloths and napkins that will be sold around the globe.

Today, Ferguson’s sell their linen to several royal families (they made 250 napkins for the Queen’s Jubilee to the same design as was used for her coronation napkins) around the world. Their prized fabrics are bought by the likes of major opera and ballet companies and leading fashion designers.

Technology has made the process more efficient, even allowing for more bespoke designs, Nigel says, but the human skill and endeavour that lies at the core of Irish linen’s renowned quality, including Ferguson’s famous Double Damask, remains a key part of the company’s success. You can buy their products at their factory shop, online, at retail stores throughout the island of Ireland and at the FE McWilliam Gallery, Banbridge.

Tours of Fergusons can be arranged by calling 028 4062 3491 and asking for Nigel or emailing nspiers@fergusonsirishlinen.com.

Linen tours of Banbridge and further afield can be arranged by contacting the Banbridge Visitor Information Centre on 028 4062 3322 or emailing tic@armaghbanbridgecraigavon.gov.uk. Please allow notice of at least three days before booking either tour.