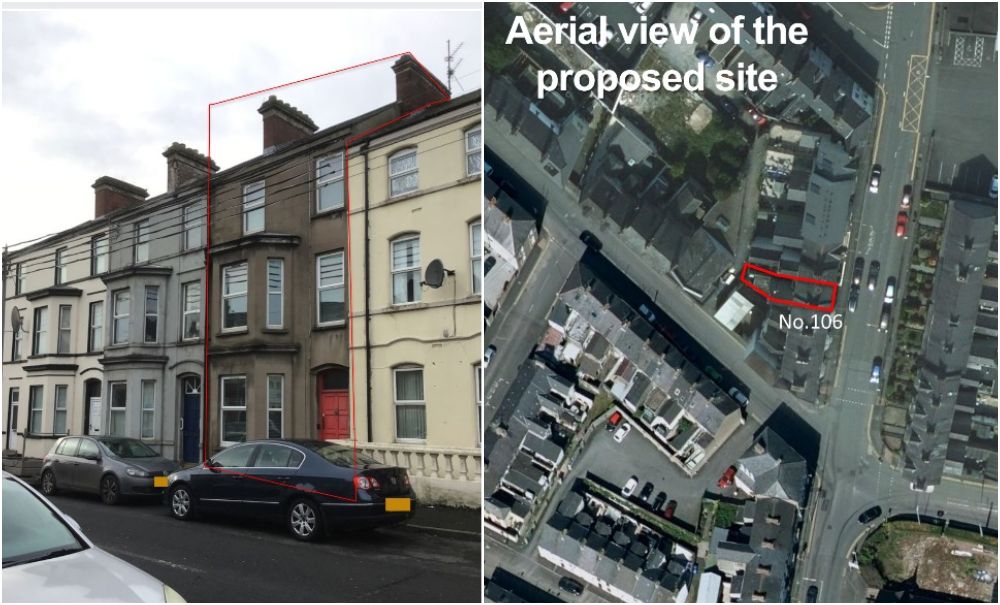 A vote was required for Armagh City, Banbridge and Craigavon Borough Council’s planning committee to approve an application requesting permission to change the use of a Portadown property to a house of multiple occupancy (HMO).

The chamber was divided on Wednesday, January 11, with Councillor Peter Lavery proposing the application, seeking permission to change the use of a property on 106 Thomas Street from a dwelling to an HMO was approved and Alderman Sydney Anderson proposing it was deferred to allow for consultation with residents of Thomas Street.

A vote on Cllr Lavery’s proposal, which was seconded by the committee’s Vice Chair, Councillor Kevin Savage, saw the proposal passed with seven votes in favour one against and one abstention.

The application was lodged by agent Collins and Collins on behalf of applicant Geoffrey Duggan and has received three objections from three addresses and one petition of objection with 103 signatures.

The main issues raised in the petition and the objections are: the number of HMOs in the location; concern about increased noise; parking and congestion; devaluing property; impact on infrastructure and anti-social behaviour.

Council’s planning committee has approved five HMOs in Thomas Street since the start of January 2016 and members were advised that including this application, there are two current applications for HMOs on the street.

“I am aware there is a deep sense that Thomas Street, which was once considered a residential and family orientated street is fast becoming very changed in its set up,” he said.

“What percentage of changes to HMOs, on what was formally seen as a family orientated and residential street should we approve?”

A planning officer told the committee Council does not have a specific policy on HMOs and confirmed the application complies with all relevant planning policy.

Council’s head of planning, Damian Mulligan told the committee that while Thomas Street is a residential street there is an “important distinction” concerning this application.

“This address is considered to be in a town centre location so it is not a predominately residential area in terms of its character and that is an important distinction,” he said.

“In a town centre, the strategic planning policy statement (SPPS) supports a diversity of uses which includes residential development.”

Councillor Kyle Moutray asked officers to elaborate on the concerns expressed in the petition as he wished to know if there was one concern in particular those objecting to the application wanted addressed.

A planning officer advised the petition was originally submitted in relation to another application on Thomas Street but those who signed asked for it to be copied into other applications on the street that were active at the time it was lodged.

Councillor Sam Nicholson said it was important Council struck the right balance with HMOs and said he is still of the view the local authority needs a specific policy to deal with HMOs.

“It is about balance, less dereliction and getting footfall into town centres versus potentially eroding the character of the area,” he said.

“You go from a family home to a potential of 12 people living in one unit with three wheelie bins in the backyard to facilitate the waste those people could produce.

“It is a concern of mine. I am very much a supporter of city centre living but it is a very difficult one. I have real problems comparing this to a family house but unfortunately, I go back to the fact we have no policy.”

Councillor Paul Duffy asked about plans for a fire escape in this development but was told that is a licensing issue not a planning matter.

Mr Mulligan then reminded the committee, this application is considered to be in the town centre.

“If we can’t accommodate a development of this type in a town centre without causing demonstrable harm, where can it go,” he asked.

“A town centre, as set out in SPPS is about accommodating a diversity of uses including residential. In principle the type of development is acceptable and there is no objections from DfI Roads or Environmental Health.

“Officers are of the view this is acceptable notwithstanding members concerns.”

Alderman Anderson then sought legal opinion and his proposal was seconded by Cllr Moutray.

When the committee returned, its Vice Chair, Councillor Kevin Savage said everyone had concerns about the increasing number of HMOs but acknowledged that without a specific policy in place the committee has its “hands tied”

“There is a policy in place this application can be assessed against and it does meet the criteria. So I think on the basis of that that we have our hands tied,” he said.

“The officers’ recommendation is one we, maybe reluctantly, have to accept and I can’t see any grounds for refusal myself at present.”

Cllr Nicholson said he was of the view these applications are no longer “being dealt with properly because we don’t have a specific policy”.

“I mean the way we do for rural housing. We don’t rely on the SPPS by itself to make a decision on rural housing so this is where my frustration is,” he said.

“I agree with Cllr Savage, our hands are tied tonight. If we turn this down and it goes to appeal it would be overturned because there is a policy there but in my eyes and opinion it is not suitable.”

Alderman Anderson asked how many HMOs would be allowed on Thomas Street before the committee could say enough is enough?

“Do we wait until the whole of Thomas Street is changed into HMOs as we don’t have a policy ourselves? Essentially everyone who hears this debate and is considering an HMO in Thomas Street should be getting their application in ASAP,” he said.

“This can’t go on, you cannot let HMOs overtake a whole street that has been family orientated for decades. We, as a planning committee, have a responsibility to ensure that everyone on Thomas Street has been treated fairly.

“This keeps coming up month after month and there are actual issues here. I think our hands are being tied but there is something that needs to be looked at. I have those concerns and want them noted.”

Councillor Peter Lavery said he would be taking his decision “solely on planning arguments presented in the report” before Mr Mulligan said if members are of the opinion there is demonstrable harm they could refuse the proposal or defer it to seek further information.

Alderman Anderson proposed the application was deferred stating it is “right that we, as a committee, give the residents of Thomas Street a great say in what is coming forward”.

Cllr Lavery then proposed the officer’s recommendation was accepted and this was proposal was seconded by the committee’s Vice Chair, Cllr Savage.

Cllr Moutray subsequently seconded Alderman Anderson’s proposal. The committee’s chair, Alderman Gareth Wilson told the chamber that as Cllr Lavery’s proposal was seconded first, it would be the first to be voted on.

The vote on Cllr Lavery’s proposal saw seven councillors – Lavery, Duffy, McAlinden, McGeown, Nicholson, Savage and Toman – voting in favour of the application and Alderman Anderson and Wilson voting against it, along with Councillors Moutray and Wilson.

Alderman Kenneth Twyble chose to abstain from the vote and with seven votes for, four against and one abstention, the application was approved.