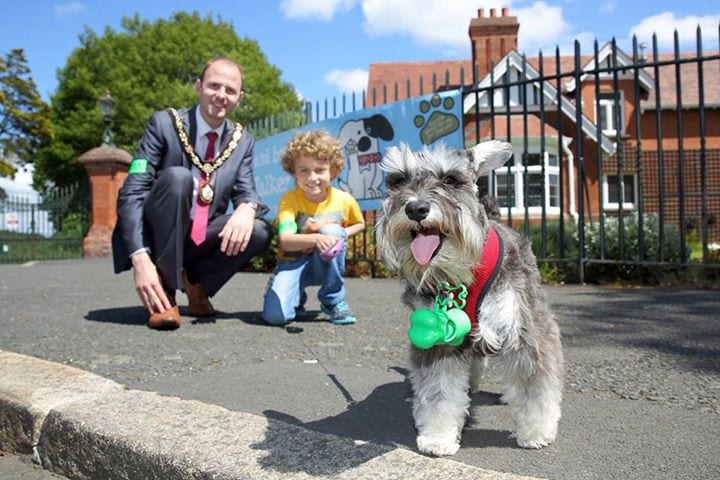 CCTV cameras are to be installed in ‘hot spot’ areas in a bid to reduce levels of dog fouling across the borough.

Bags will also be handed out to dog owners in a bid to better educate them of their responsibilities.

The information came to light at a meeting of Armagh City, Banbridge and Craigavon Borough Council when the new Fouling of Land by Dogs Order was debated and approved.

The Order, which comes into effect today (Monday), October 5, simply harmonises the level of fines to be paid by those who allow their dogs to foul, bringing the same penalty levels for each of the three former council areas of Armagh, Banbridge and Craigavon.

The legislation applies only to land open to the public, such as parks and public spaces, where people walk their dogs. Hunting dogs on private land are an exemption.

During the course of the debate, DUP Councillor Gareth Wilson said dog fouling was a massive issue in Clare Glen, with 84 instances of fouling recently.

He emphasised the need to see penalties enforced and a strong message sent to the public and enquired if council had the staff to do this.

Armagh’s Head of Environmental Health and Neighbourhood Services said that the issue was being able to witness people carrying out the offence.

He added that officers were raising awareness through education and he informed councillors of plans to install CCTV cameras in ‘hot spot’ areas and to give out bags to dog owners.

Councillor Wilson said the public were very aware of the issues with dog fouling and highlighted that it was just a small percentage of persistent offenders who did not want to comply. He emphasised the need to fine these offenders to discourage them from offending again.

The council official said there needed to be a greater emphasis placed on keeping dogs on leads, as dogs let off their leads were more likely to foul.

Sinn Fein Councillor Gemma McKenna remarked that officers needed to look at the hot spots, evaluate the resources available and ensure officers were being best placed. She highlighted that dog fouling was an issue that happened all year round and suggested officers looked at best practice amongst other councils that had successfully dealt with the issue.

Ulster Unionist Alderman Ian Burns said the public needed to see that penalties were being issued to show that council was being pro-active.

Craigavon’s Head of Environmental Health said officers would be looking at sharing resources across the borough.

She highlighted that the Community Engagement Officer had been working on the ‘Fed-up with Fouling’ Campaign and also informed councillors they would be running a ‘Green Dog Walkers’ scheme, which encouraged dog walkers to sign up and help their fellow dog walkers by handing out free dog bags.

Ulster Unionist Councillor Glenn Barr suggested officers target hot spot areas and bring resources in from across the council area to send a strong message to the public.

Independent Councillor David Jones told the meeting that, as a dog owner, he had never come across a dog warden while out walking his dog. He said this needed to be addressed as, only when offenders know that a dog warden could be in the area would they start being more pro-active. He asked whether wardens wore a uniform when carrying out patrols.

Armagh’s Head of Environmental Health said that dog wardens were working “very proactively” and, when officers were carry ing out patrols, they wore high–visibility clothing.

DUP Alderman Junior McCrum asked how many dog wardens were employed within the council and how many convictions there had been.

He was informed that there were five dog wardens over the three areas of Armagh, Banbridge and Craigavon, but there were other officers who could issue penalties, such as clean neighbourhood officers.

In relation to penalties, there have been three issued in the past six months.

There was high praise for officers from DUP Cllr Margaret Tinsley, who said they worked very hard on the issue of dog fouling.

She suggested officers try to find out what time of the day offences were occurring and restrained from wearing high visibility clothing. She believed banners should be moved to different areas and referred to the increased use of social media to highlight this issue.

The Interim Director of People said there was a need to bring all suggestions together to find a way forward to deter and prosecute offenders.