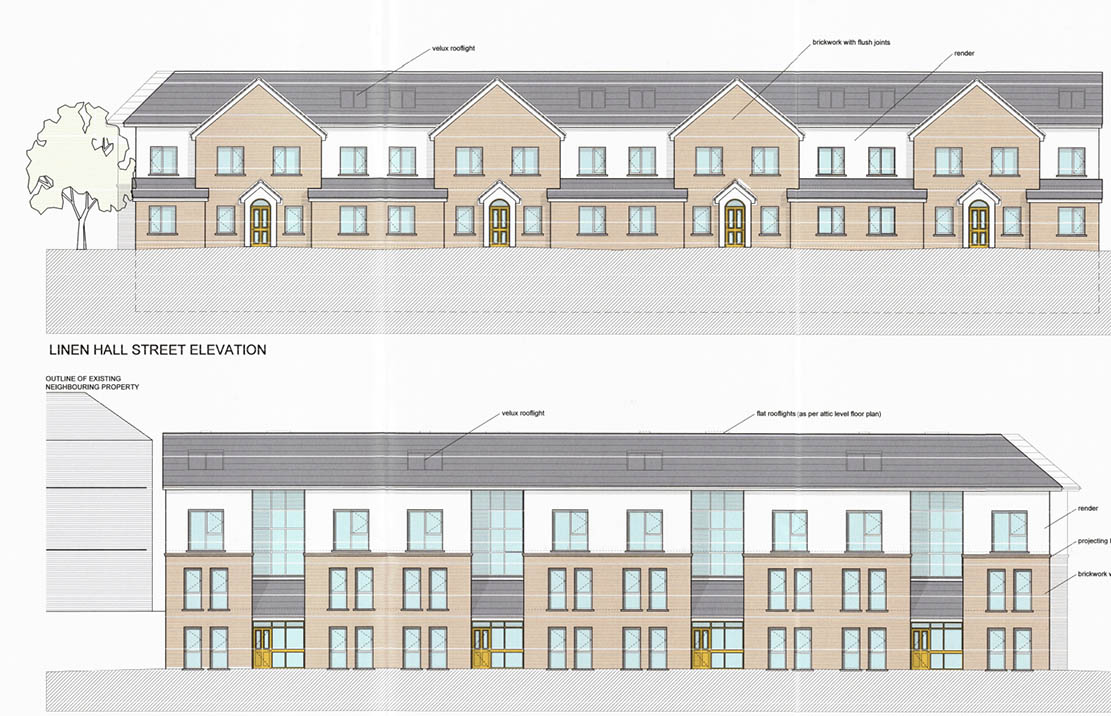 A new apartment block on the site of a former GP surgery in Banbridge and next to the historic Downshire Arms Hotel looks set to be given the go-ahead – five years after proposals were first drawn up.

Planning officials will recommend that the three-storey building – consisting of a total of 24 apartments – should be allowed to proceed.

That is the opinion for the site at Linenhall Street which they will present to Wednesday’s meeting of Armagh City, Banbridge and Craigavon Borough Council’s planning committee.

An application for the development was first submitted in April 2017 and has been under consideration ever since.

During that time, close to 60 objections to the proposed development were received.

The applicant, Hugh J O’Boyle Ltd, from Downpatrick, is hoping to build an apartment block which would have two storeys fronting onto Linenhall Street and three storeys to the rear, together with attic level accommodation.

In all, under amended plans brought forward in the summer of 2020, a total of 24 apartments would be created, with the original application having consisted of 28.

The development would be built on “lands at the former Banbridge Medical Group Centre, Linenhall Street, Banbridge”.

The site is described in the submission as a “vacant former doctor’s surgery”, the GP surgery having moved some years back to become part of a health complex located on what was once the old Banbridge Hospital.

The plans for housing, however, to make use of the vacant site have not been well received by some.

According to a design and access statement submitted shortly after the original application, the principle of residential development had been established on March 23, 2009, when “full planning permission was granted for 25 units”.

That scheme consisted of apartment units within several blocks, ranging from two to four storeys when viewed from Linenhall Street.

Approval had lapsed before this latest application.

The design and access statement adds: “There are no architectural, built heritage or landscape features within the site which require protection.

“The rear return of the Downshire Arms Hotel – a listed building – is located adjacent to the site.

“The development has been stepped back from the Commercial Road junction in consideration of the listed status of the building and the proposals incorporate landscaping along this boundary.”

The proposals – both the original and the amended plans – have brought forward objections from locals including neighbours to the former GP surgery site.

Residents of Beechvale Court also submitted their own collective petitions and called for “common sense to prevail” when considering the application and the “wider implications of this proposed development”.

They had objected to the scale of the apartments development and voiced concerns too over road safety.

The petition states: “Linenhall Street is already an extremely busy and congested road. It is used as an alternative route to bypass town centre roads and is also used as the main link to the new medical clinic.

“Additional traffic and parking from this proposed residential site will further heighten existing traffic problems in the area and create a safety hazard for other motorists and pedestrians.”

Another neighbour, from Downshire Gardens, objected to the original application and the amended proposals for four less units.

He wrote: “This space could be used for something a lot better like bungalows that are in short supply but high demand for older residents of the Banbridge area.

“Twenty-four apartments will end up like the previously built apartments on Linenhall Street. These are a hive of anti-social behaviour and police are at them on a regular basis.

“Downshire Gardens and the other houses around this site are family homes, homes to elderly. We do NOT want these apartments and the trouble, noise and other issues they will bring to the area.”

There were similar sentiments from another resident of Downshire Gardens.

She contacted ABC Council and informed officials: “This is a quiet residential area with many elderly residents. We are already plagued by the current Linenhall flats that exist, due to call-outs from the police and anti-social behaviour.

“These flats dump their rubbish into the old surgery grounds. How would this even be for residents in this new development?

“The area consists of bungalows and this property will tower over them and be an eyesore.

“We have previously objected to this same proposal twice and it has not been amended or downsized.

“Banbridge does not need any more flats – look at the large development on the Dromore Road!

“If anything the town needs nice bungalows or small houses that compliment the existing area.”

Despite the letters and petitions of objection, planners are satisfied that the proposed apartments block can be built.

That will be their recommendation when the planning committee sits next Wednesday.

It will, of course, be up to the councillors as always to decide whether or not to accept the recommendation to grant planning approval and allow building work to begin.