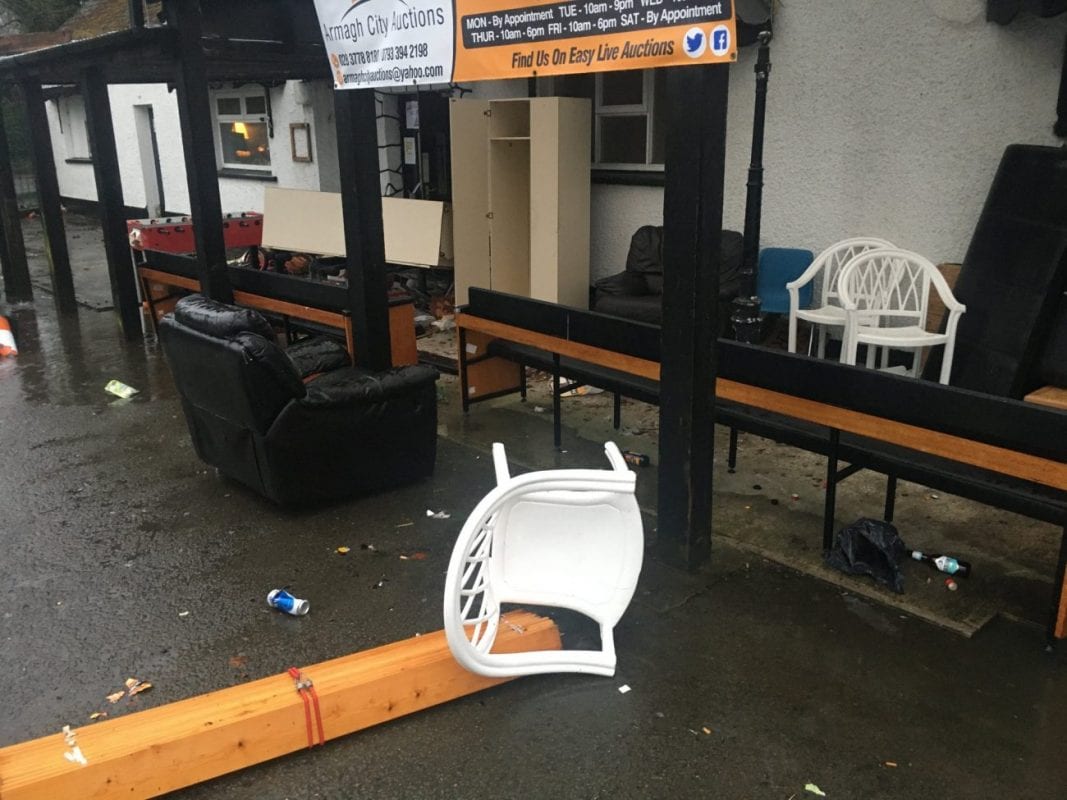 The owner of an Armagh auction house has hit out at the “disgusting” youngsters who broke into the premises on St Patrick’s Day.

Barry Boylan of Armagh City Auctions, which opened just five months ago, has been left reeling from the incident which involved upwards of fifty youths.

Speaking to Armagh I, he said: “Our auction is usually on a Tuesday, so I decided to close due to St Patrick’s Day and with everything else going on around the coronavirus.

“It’s a good job I closed because if those young ones had have come when there was a live auction on it would have been absolute mayhem.”

Barry is not the only one who has had similar problems in recent times.

“Apparently they are terrorising this whole street,” he said. “I was in the shop behind us, who told me that they wrecked the place on Friday night as well.”

After viewing CCTV of the youngsters, Barry said he was left “disgusted” as footage showed the revellers dancing and urinating on items around the yard.

He said: “It’s not good to be honest with you, I came here and it is an absolute mess, I don’t know if they got inside the building last night but they have partially got in because they have smashed a TV, which was in the windowsill.

“There was about 50 people there when I turned up yesterday evening, most of the, fled. I got the call around 5.50pm and they had been here for an hour already; had nobody told me, they could all have gained entry.

“I mean I have a safe and all in here, I have valuable jewellery; I haven’t had the chance to check for stock yet, we have been cleaning up all morning – it was just absolute mayhem.”

What makes matters worse for Barry is that some of the young people involved are known to him.

He said: “I am very disheartened, I contacted a lot people last night because I know some of their fathers but they all denied being there, even though they are clearly on the camera.

“I don’t mind anyone taking a drink, I used to do it myself, but I would never have done anything like this to anybody, so I will just leave it to the police.

“Personally, I think they were just looking for shelter; I have a big veranda, which I wouldn’t have minded but the for damage they caused.

“When I approached them, they all said ‘we aren’t doing any harm’ but there were smashed bottles everywhere, it’s not good enough.|

Barry said that when first contacted that there were people in his yard he expected to see a group of four or five but instead there were around 50.

“They may not be big enough on their own, but if you get five or six of them, they were very confrontational, two in particular were very rowdy.

“I know it is all to come, I will have no auctions at some point going forward, there is a lot of damage here and a lot of the stock is not mine; it is other customers and they still want the money for it.

“I still have to pay rent, and I don’t know how I am going to keep going, this is also a threat to my business as people will probably think, that place is not safe to go to.”