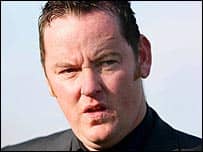 LOUGHGALL kicked off their season with an opening day defeat at the hands of Belfast Telegraph Championship 1 newcomers Knockbreda.

Loughgall performed well in the first period but couldn’t find the goal to match their play. Striker Haire couldn’t keep his header down after six minutes, and five minutes before the break McCann lifted his shot over the crossbar from close range.

After an entertaining first period, the turning point in the game came three minutes after the break when Jude Bollard handled on the line to deny Gary Chisolm from opening ‘Breda’s account. The referee had no option but to send the dynamic midfielder off before James Wright slotted home the spot-kick.

The hosts doubled their lead in the 62nd minute when Miguel Chines played a wonderful cross from the right touchline, the deep delivery was headed home at the back post by Gareth Corey.

And 10 minutes later Knockbreda made sure of the win when Chines hit a fantastic volley from inside the area past ‘keeper McArdle.

With nine minutes remaining Loughgall pulled a goal back after great play from substitute Stefan Campbell set up Wesley Boyle to fire home from close range.