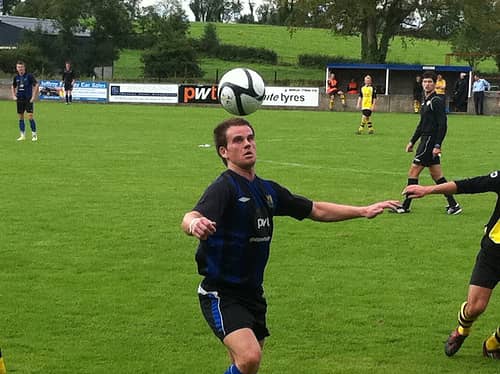 ARMAGH City’s entire season will be decided during their final three fixtures in the Belfast Telegraph Championship Two.
And all three will be played away from home – two against their closest rivals!
Starting tonight, (Tuesday, April 23 at 7.45pm), second-placed City will renew their fight for promotion when they travel to play current third-placed Ballyclare Comrades in a make or break encounter.
The County Antrim side are just one point behind Armagh in the championship and both have played the same number of games.
But, just four days later – on Saturday, April 27 at 3pm – it is crunch time once again when the Holm Park outfit travel to face county rivals Lurgan Celtic – the fourth-placed team who are four points in arrears of City but have the advantage of a match in hand.
In the two home league encounters already played against both opponents, City have just managed to come out on top as narrow 1-0 winners, courtesy of a fourth minute Gavin Cusack (pictured) score against Celtic and a late Philip Donnelly strike in the Comrades clash.
Armagh round-off their league programme a week later when they are on the road again. They travel to face Ballymoney United and, at this stage, should know if their promotion bid is still alive!
The carrot for all three contenders is a place in Championship One where the rewards are much greater, with larger crowds at games and, as a result, increased income for clubs.
Currently, Knockbreda are five points clear at the top of Championship Two and need only one point from their remaining matches to clinch the title.
But, with two teams moving up, the fight for the runners-up spot between Armagh, Ballyclare and Lurgan seems set to go right to the wire.
None of the three is conceding ground and Comrades will be full of confidence after overturning the league leaders in Belfast last weekend – despite finishing the match with 10-men.
City, however, will be in similar mood after they also travelled to the capital last Saturday and came away with maximum points after a 6-2 demolition of Sport and Leisure Swifts. Scorers for Armagh were Gareth Grimley, Matthew Hynds, Dara Noonan, Ultan Lennon and a double from Philip Donnelly.
The only negative from that match was the fact that Noonan had to leave the pitch with injury after City had made all three substitutions and, as a result, they also finished with a player short.
No doubt, frantic efforts will have been made over the weekend to ensure Noonan’s appearance this evening (Tuesday) at Ballyclare as the big central defender has played a major part in Armagh’s recent unbreaten run.
So, everything is set for the final countdown and, hopefully, Marty Rice’s team will show the character and fluency which has taken them to within a whisker of a deserved promotion!