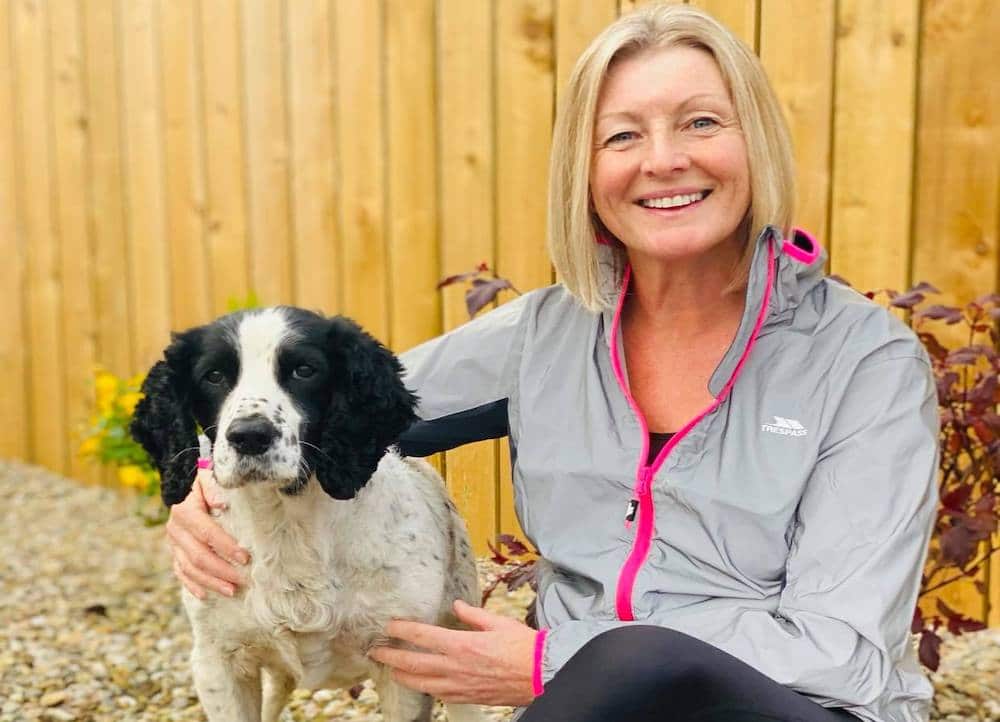 While most of us will be opening our presents and dreaming of the Christmas dinner to come, one Co Armagh woman will be taking on a 17-mile trek to raise money for Acute Services at Craigavon Area Hospital.

Richhill’s very own Jenny Chambers will be setting off from Newry at 7am on December 25 with the aim of being back home in time for lunch!

Many will be well acquainted with the Speech and Drama teacher, who can be seen frequently walking in the area, always accompanied by her trust companion, Lucy the dog.

The 53-year-old’s self-titled school has raised money for numerous charities through concerts down the years but this was not possible this Christmas due to restrictions.

With that, Jenny set herself a very different task in order to raise money for the Acute Services at Craigavon Area Hospital.

Speaking to Armagh I, she said there was no fear over the upcoming pilgrimage, joking that it would be “wee buns” for her.

“I was a bit dubious about setting up a JustGiving page, but thankfully I had the help of Sophie (Bentley) because I am absolutely hopeless with computers.

“She talked me into doing it and I have just been blown away by it all. We have already raised over £1,200 between the JustGiving and personal donations.”

Along with her annual concerts, Jenny has also raised vital funds for charities by engaging in various crazy and daunting activities.

She said: “Last May, I abseiled down the City Hospital for the Friends of Cancer Centre. I have jumped out of an airplane. I have done it all.

“I had said when I turn 50 that was me, but then I went and did the Belfast Marathon. I just walked. It nearly took me a fortnight!”

Jenny said that the support of her parents was one of the main factors which have fuelled her desire to take on this mammoth task.

“My father just went into care there over lockdown and my mummy is a very good Christian lady. Only two weeks she had me delivering chocolates, biscuits and fruit loaf to the nurses and doctors.

“When I got into A&E it would have broken your heart to see those craters working flat out and I don’t think they are getting much credit.”

When asked about why she chose the Acute Services, Jenny explained: “One parent of a child in my school works in Accute Services. We went to present a cheque last year and I brought some of my older students.

“One of the girls asked me about the tubes in one little girl’s neck. I told her she was receiving treatment and the girl from my class was shocked as they were around the same age.”

Jenny confided how this teenager had committed to selling twice as many tickets this year but alas that was not to be.

“It does hit home for the younger teenagers and the treatment they received in there is unbelievable,” she added.

Jenny will be joined on part of the journey by her four-legged companion.

She added: “Lucy is always with me. The vet says she is the fittest 12-year-old he has ever come across.

“But because it is such a journey,  I have never walked her the full distance. I am going to get her left with me in Markethill and she will walk with me back to Richhill from there.”

Hoping that she will have her feet up for around half one on Christmas afternoon, Jenny will then tuck into lunch which she will prepare the night before alongside her mother.

Jenny wanted to thank all of the children and parents at her school who have worked so hard through the years to raise life-changing money for so many charities.

If you would like to make a donation to Jenny’s walk, you can do so through her JustGiving page.