While the damage caused to vehicles was estimated at £19,000, the judge said of their actions in targeting oncoming motorists in darkness: "Their disregard for fellow human beings is breathtaking." 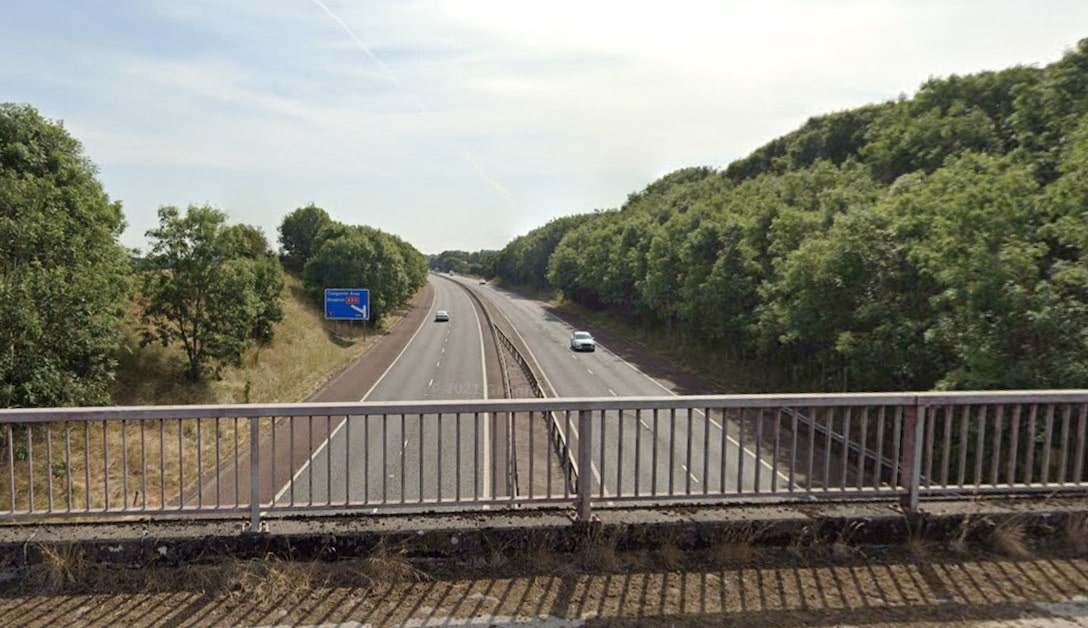 Two men involved in lobbing eggs and tubs of paint from a motorway bridge in Portadown into oncoming M1 traffic, on three separate occasions, have been locked up.

At Craigavon Crown Court on Friday, Jamie Forde, 21, of Drumcree Road in Portadown and Morgan Michael Guy, 21, of Richmond Close, Tandragee, were told they must serve half of their 21 month sentence behind bars following a series of “appalling” incidents between January 27 and February 8, 2021.

A third defendant, Jason Stephen Meredith, 20, of Moodage Road, Tandragee, was convicted of one count of criminal damage and was given a prison reprieve “by the skin of his teeth” whereby a 15-month custodial period was suspended for three years.

Prosecution counsel Nicola Auret, outlining the facts of the case, explained that on Wednesday, January 27, 2021 police received three reports involving eggs being thrown from a bridge on the Derrycarne Road onto traffic travelling on the M1 around 11pm.

The eggs struck a Vauxhall Astra, Peugeot 208 and a Scania lorry, with the Peugeot sustaining a dent and paintwork damage.

Initial descriptions were given of two males wearing hi-vis jackets, and a possible other male in dark clothing.

On Monday, February 8, similar incidents at the same location were reported, with this time what was believed to have been paint being tipped onto vehicles passing under the bridge. These incidents were again in the late evening during the hours of darkness.

A further incident then came to light four days previously, on February 4, involving the chucking of paint on a passing lorry.

White paint was splattered over the top and sides of the lorry requiring a significant amount of time and effort to remove.

In relation to the offences on February 8, a lorry, a Land Rover Discovery and a Citroen Berlingo van were damaged. The lorry sustained a broken headlight and rear view camera. The front off side of the lorry was covered in paint and the windscreen had to be replaced.  Paint was thrown onto the Land Rover Discovery, landing on the windscreen and causing the driver to have to slow down and use his wipers to try and clear it.

Ms Auret said the estimate to make good the damage was in the range of £19,000.

Ms Auret added: “Although fortunately, the actions of the defendants did not result in any of the vehicles crashing, a number of the drivers reported feeling frightened and shaken by the items being thrown from the bridge.”

On Friday, February 12 – just four days after the final incident – a road policing unit recovered a number of items from the Drumcarne Road area, including three tubs of paint and an egg carton.

The egg carton was traced back to a Spar in Portadown, where CCTV from January 27 showed on two occasions, at 10.25am and 10.42am, a vehicle arrive at the shop.

Three males exited the vehicle, one in yellow hi-vis vest, one in dark clothing and one wearing an orange high-vis coat.

All three bought eggs at the tills before exiting the store, which was approximately 15 to 20 minutes before the initial reports of items being thrown from the bridge were received.

Due to the match in descriptions, checks were conducted and Guy was first identified.

He was arrested at his home and taken to Lurgan custody suite where he was interviewed; the other defendants were named during this interview. He stated that whilst he was present on all three dates, he only threw eggs on the first occasion and not did not participate in the throwing of paint onto oncoming traffic.

None of the three defendants admitted to throwing the paint at any stage but both Guy and Forde accepted to being involved on all three dates.

At the time of the incidents Guy was waiting to be dealt with for an offence of causing grievous bodily injury by dangerous driving, an offence for which he subsequently spent four months in Hydebank prison, where he was also subjected to a serious assault.

Forde was also on bail for the offence of causing grievous bodily injury by careless driving, which had occurred on November 13, 2020. He was given a non-custodial sentence in February for that incident.

His Honour Patrick Lynch QC, in passing sentence, remarked: “It is difficult to comprehend the sheer irrationality, recklessness and irresponsibility on the part of the three defendants in this case. Their disregard for fellow human beings is breathtaking.

“These are not stupid men. They’re all from good family backgrounds. They’re all capable of holding down, and do hold down, good jobs, which is a testimony to their industry and their capacity for work, and, indeed, their abilities generally.

“How on earth they got themselves involved in this sort of activity is beyond explanation and, indeed, no rational explanation or explanation of any sort really has been afforded in this case.

“In summary, they have accepted in varying degrees their involvement in three separate incidents of throwing items from a motorway bridge.

“The backgrounds of each of the accused are excellent…which makes it all the more puzzling that they should have gone off the rails to the extent that they have done in this particular case. I cannot understand it.”

In handing down custodial sentences to Guy and Forde, Judge Lynch added: “The custodial threshold has been passed here because of the danger that was obvious to anybody in the actions that they carried out on those three dates.

“Also, they’re targeting cars or vehicles that are passing underneath at night, maximising the danger to the road users at that point in time. These are intelligent men who knew, or should have comprehended, the potential danger to drivers themselves.”