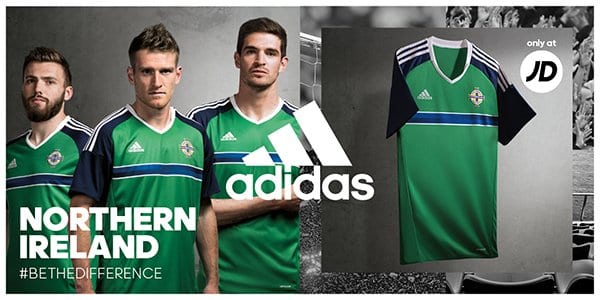 “I’m praying to God, Allah and David Healy that this is a wind-up. An absolute monstrosity,” is how one Northern Ireland fan reacted to the launch of their Euro 2016 kit yesterday.

The eagerly-anticipated kit was released yesterday but within hours there was an online petition for the jersey to be scraped to ‘Get Northern Ireland a proper kit for Euro 2016’.

The petition, set up by Ian McKinney, said: “Northern Ireland fans were amazed and delighted when our wee country qualified for Euro 2016. It’s our first tournament for 30 years and for many of us, it’s a once in a lifetime experience.

“As fans, we were so looking forward to the finals, and particularly to a new kit. With Adidas in charge, we all thought that our Finals kit would be something simple, attractive and instantly classic, like our Spain 82 or Mexico 86 kits.

“Unfortunately Adidas produced an absolute monstrosity of a kit which has received almost universally negative feedback. It has too many colours, a terrible design, and it’s totally out of touch with what fans wanted.

“Together we could force the IFA and Adidas to change. If you don’t like the kit and you want something better, then sign the petition.

“Let’s get ourselves the kit we deserve, not this awful mess!”

Thousands of fans have demanded Northern Ireland’s new home kit be scrapped before the Euro 2016 finals.

The petition is just a few hundred signatures shy of its initial 5,000 target.

The Irish FA and Adidas said of the kit: “The new home shirt design pays tribute to designs from the 80s when the team last reached a major international competition at the 1986 FIFA World Cup Finals in Mexico.” It’s set to be worn by the players for the first time when they play Latvia at Windsor Park. Here is how some fans reacted on Twitter:

@OfficialIrishFA I’m praying to God, Allah and David Healy that this is a wind-up. An absolute monstrosity #gawa — Chris Adams (@cmadams18) November 9, 2015

@cmadams18 @OfficialIrishFA The more you look at it, the worse it gets – an achievement in itself. Gutted for NI fans, deserved better.

@Winty136 @OfficialIrishFA not long bought the last one for me and my 2 lads and much prefer it anyway — OWC (@tchrissmyth) November 9, 2015

@tchrissmyth @OfficialIrishFA should be a green top end of. Awful effort that is looks like a training top!

@OfficialIrishFA good luck on getting sales for this — nôtre petit pays (@dickyrockshell) November 9, 2015