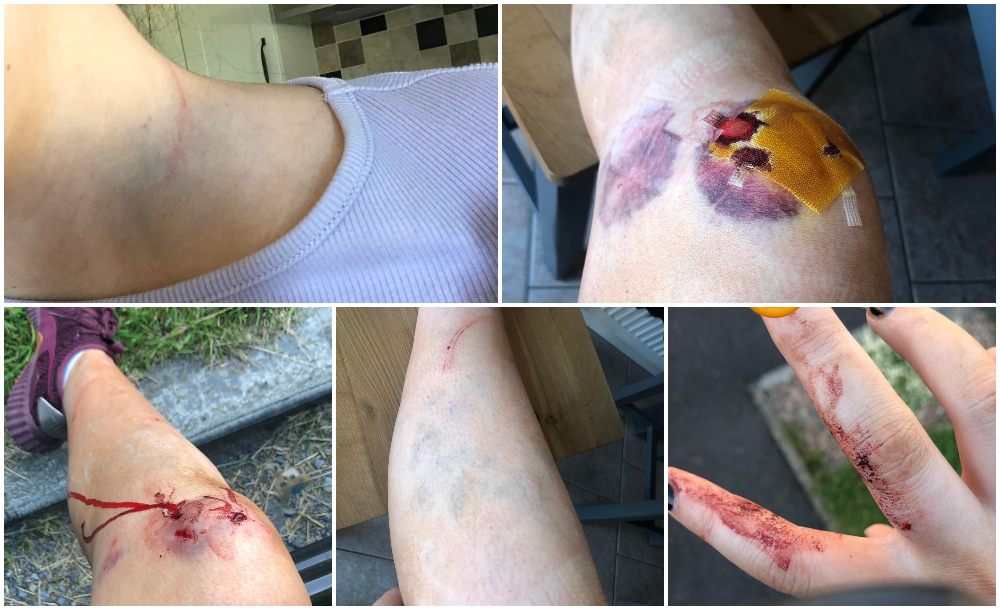 A woman who was attacked by a dog as she tried to protect her own pet has said it is an “absolute disgrace” that such an aggressive animal is allowed to roam free.

The woman was out yesterday (Wednesday) evening in Darkley Forest, outside Keady, when the incident took place.

She sustained bites and bruising to her finger, knee and neck and had to flag down a car to use the driver’s phone and get a lift back into town.

Her dog needed antibiotics and painkillers.

Writing on Facebook, she said the dog, which did not appear to be with an owner, came straight for her dog and began attacking him.

“With Renji being on his harness and lead he couldn’t manage to escape the dog as I continued to hold on to him,” she said.

“It got to the point that I had to throw down my car keys, drop his lead and try to pry this dog off Renji. I managed to lift it up where it then scraped my neck and bit my finger, making me drop it.

“It then proceeded to go straight for Renji once more. Again I tried to get it away from Renji where it then turned on me and severely bit and scraped my knee.”

She said her dog ended up bolting and running away, with the other dog running after him.

“I thought I was going to lose my dog in this forest forever or find him seriously injured,” she added.

“When I caught up with them, the other dog finally stopped trying to attack, but it wouldn’t stop following us, meaning I couldn’t even go back to find my car keys.

“I ended up having to hail down a car to use their phone and getting a lift back into town. (Poor man must have been traumatised as I’d blood all over my cheek).

“An absolute disgrace that such an aggressive dog is allowed to roam around the roads freely. I think we’re both lucky it wasn’t a bigger dog but it doesn’t mean it didn’t do enough damage!

“Renji has luckily come out pretty unscathed apart from some minor bites on his back thigh, and needing some antibiotics and pain killers. Me, not so much.”

She described the dog as a black Jack Russell mix with a red, spiky collar.

Speaking to Armagh I, she added: “In situations like these, I fully blame the owner and wish nothing to happen the dog. The owner has not only put other dogs and people at risk but also now their own dog by letting it run the roads freely alone.”