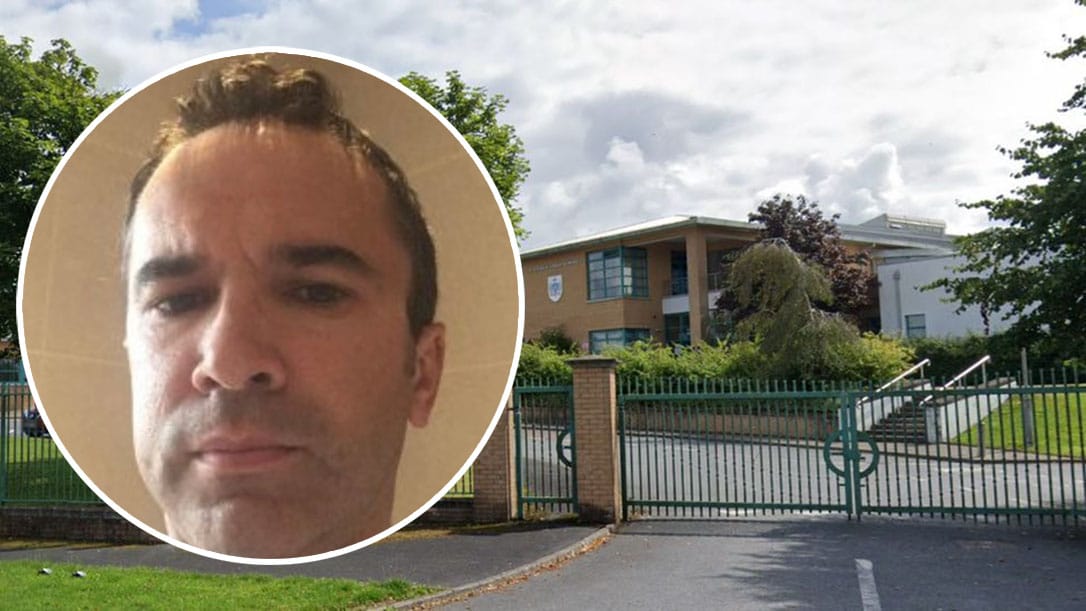 A former Keady school vice-principal, who carried out a campaign of harassment and threats to kill while being investigated for exam cheating, will be sentenced on Friday.

During a plea hearing at Newry Crown Court today (Monday), the prosecution outlined how former St Patrick’s High School teacher, Patrick Hollywood, anonymously threatened colleagues, including the then principal, as well as members of the exam board CCEA and Council for Catholic Maintained Schools (CCMS), all while he was under investigation for providing his students with answers to GCSE exams.

Hollywood, with an address of Upper Fathom Road in Newry, was arrested in 2018 during a police investigation into “harassment” letters.

Despite initially denying the offences the 41-year-old pleaded guilty to 19 charges back in May prior to the commencement of a trial.

There were seven charges of making a threat to kill, six charges of harassment and four of attempted intimidation. He also admitted a single count of forgery and pleaded guilty to causing another person to fear that violence would be used against them.

The prosecution QC Ciaran Murphy outlined how the then principal of the school began receiving anonymous letters in January 2017, addressed to her and signed off from “your loyal but concerned staff”.

Around mid-2017 whistleblowing reports exposed possible malpractice and cheating at the school in relation to GCSE examinations held in January and June of the same year.

Letters continued to be sent to the principal, which gradually became more intimidating and threatening towards her, demanding that she leaves her job. They changed from being signed off from loyal and concerned staff to St Patrick’s High School INTO Organisation members.

The subsequent investigation into examination malpractice found that numerous teachers and teaching assistants were involved in the cheating.

The findings recommended sanctions for all those involved and they were passed to the CCMS to be actioned. The majority of those who received sanctions accepted them, except for three individuals.

Among the three people were the then principal, Hollywood – then vice-principal – and a third person who had the sanction rescinded.

Mr Murphy outlined that the defendant, in March 2018, received “a severe sanction from CCEA following the investigation into the malpractice” and that such a sanction would have resulted in the “likelihood he would lose his job as vice-principal, and would have had serious implications for his employability as a teacher at any other school in Northern Ireland”.

Mr Murphy stated that the focus of most letters initially appeared to be intent to muddy the waters regarding who and what information was reliable for the CCEA investigators to base their findings upon. The impact of the letters were enforced with threats being made towards the family and children of those people who were employed by the CCEA.

His Honour Judge Gordon Kerr said it was notable that “in some of the letters he made it absolutely clear not only did he know the children involved, but he knew the location”.

The court heard that Hollywood himself had received letters to his home address, which were of “a very threatening and harassing nature”.

However, he would not engage with police, which the Mr Murphy remarked was “clearly an effort by Mr Hollywood to cover his tracks in establishing himself as a victim”.

Hollywood went on sick leave in October 2017, just after he was confronted by a parent during a school event regarding cheating.

The reason given for absence from the school was provided in numerous sick lines as “cluster headaches for which he was receiving treatment”.

While he was off on leave, he was informed that he would be suspended following the results of the CCEA investigation.

In September 2018, he resigned from his position as vice-principal, and his appeal against sanctions was suspended due to a police investigation.

The school principal also took a period of leave “due to stress and intimidation arising from the letters”. She subsequently resigned as principal and is not currently employed, the court heard.

The subsequent police investigation involved the cyber crime unit after a laptop was found hidden under a dresser at Hollywood’s parents’ home.

During interview, when questioned about the letters found on the laptop at his parents’ house, Hollywood stated that he had typed them onto the computer and saved them onto a storage device so that he would have a copy of them.

Mr Murphy added that he was unable to offer an explanation as to “how he would have typed them before he received the letters other than to say just he may have been sent the letters before they were sent to anyone else”.

“He couldn’t explain why he would have typed letters when he had access to fully functional printer, copier and scanner in his home,” added Mr Murphy.

“He said he recognised it as being a computer he owned but could not remember the last time he used it and could not explain why his laptop was hidden under a dresser in his parents’ home.”

Mr Murphy outlined some of the details carried in the letters to the various victims, including anonymously threatening his own solicitor at the time, asking her to “…withdraw support for Paddy Hollywood and you will have no further contact from us, otherwise, we will have no option but to take violent action against you and your family, putting you in grave danger”.

The newly appointed principal of the Keady school received a letter to the school address and it was signed in the same manner.

“We are also getting access to your home address,” it read. “So, if you decide to come to Keady, you’re putting your life and your family’s lives in really grave danger. Please do not underestimate this warning, [principal’s name].”

Hollywood also wrote letters imploring that investigators do not drop the sanctions imposed on him in what Mr Murphy described as a “sophisticated approach that he took leading away from himself”.

One female CCEA employee was told that for “your safety and the safety of your two lovely children [who were named in the letter], that you listen very carefully and don’t do anything that might put your children at risk”.

“We have the complete support of the local IRA volunteers and unless you and your business assurance department of CCEA, adhere to our requests, we will get a visit to your family home from some men in balaclavas that will ensure that you listen… you have five days to reject the appeal submitted by Paddy Hollywood, otherwise, we will be taking violent action against you and your two children.

“Please don’t view this as an idle threat, [name of victim], we know exactly who you are, where you live, and know that you are fully in a position to carry out our requests….the lives and safety of your children depend upon it.”

Another woman received a letter, which read: “…..under no circumstances is this letter to be shared with the media or the PSNI, otherwise your daughters will be in direct danger…the next time you take your eyes off them might be the last time you see them. Actually, we know who you are and where you live and are ready to do whatever is necessary. Decisions you make next week may change your life forever. Don’t be foolish.”

Mr Murphy, in summarising, said: “The victim impact reports make for grim reading in relation to the affect this case has upon everyone involved. They have suffered mental torture. One person left to go to Europe for a period and one person left Northern Ireland altogether to live in another country.”

He added: “The stimulus for Mr Hollywood’s offending was rooted in self-serving behaviour, orchestrated to lessen, or to eradicate imposed sanctions, effectively derived from the defendant’s acknowledged professional misconduct.”

In offering mitigation, Hollywood’s defence barrister, Charles McKay QC, said the whole issue arose as a result of his participation in a scheme “spearheaded” by the principal at the time – a scheme to try and improve the standards of the children in their education.

Initially, that involved children who were special needs children but what happened here was that “[the principal] was very anxious that other students who aren’t necessarily special needs students, they should have extra tuition to boost their ability, so that they would perform better”.

That, Mr McKay continued, was “the real beginning of what was a toxic culture which set in in the school in the years before these offences are committed.

“He actually led himself to something he normally wouldn’t get involved in but others here were involved in similar things that he did too. So you mustn’t think that this man was participating on his own…there were a number of people in the school.

“They were teachers, they were classroom assistants, that have been engaged in this, what I’ve described as toxic culture.

“[The principal] arranged, for example, the class that she was involved with….she may divide them in terms of top 50% of ability, have the exam set a certain time, then have the bottom 50%, their exam set, at a slightly different time.

“And then those people who were in the second lot, would get a degree of coaching…people who were then prompting them…so there was a structure here, there was a deliberate policy enacted at the school, under the tutelage of [the then principal] to do this, and this had been going on for some considerable time.

“My client’s involvement was he was a maths teacher. And the maths teacher had to participate in this. He willingly participated. He saw the children he was tutoring were, in fact, children, mostly who were special needs, and some who certainly were behaving and performing below par.

“But the only way that he could really assist those students, he felt, was by giving them the answers to questions.

“So his crime as a teacher, not a crime on the criminal calendar, but his misbehaviour as teacher was he provided to those children in his math class, the results of some of the questions and that way it boosted their marks.

“The marks have been boosted so significantly, the Education Authority launched an inquiry to look into what is going on in the school.

“So, you must understand, therefore, there’s a whole background of that, of misbehaviour, which wasn’t just confined to my client. He acknowledged and acknowledges that he misbehaved. But there are others who misbehaved too, and he was brought to answer this and had to go before the Board of Governors at his school. And he was sanctioned.

“They imposed sanctions on him because they found, once they received the investigative report, commissioned by the CCMS, they considered he misbehaved here. And we’re going to ban you for five years for you ever participating in an exam again. Once they did that his career was wrecked.”

Mr McKay said the principal didn’t accept the sanction she was issued and appealed it. Her appeal was unsuccessful.

Mr McKay said mental illness had a huge impact on his client and it was that “mental illness [which] was overshadowing all his decisions”….”it might go some way to explaining how he started to participate in what are these criminal acts”.

Referring to references supplied on Hollywood’s behalf, Mr McKay, said: “It is not often that you find, sitting as a judge in the Crown Court in this country, someone of this calibre coming before you.

“It’s rare when you get so many people saying, this is a good man. This man, all his life, behaved impeccably. He worked hard at school, he achieved something. He is a worker. He contributed for the community and his family. He’s not a shirker. He’s not a man trying to dodge his responsibilities in life; he is an honourable man that comes from a decent background.”

Judge Kerr QC, releasing Hollywood on his own bail, adjourned sentencing until Friday.