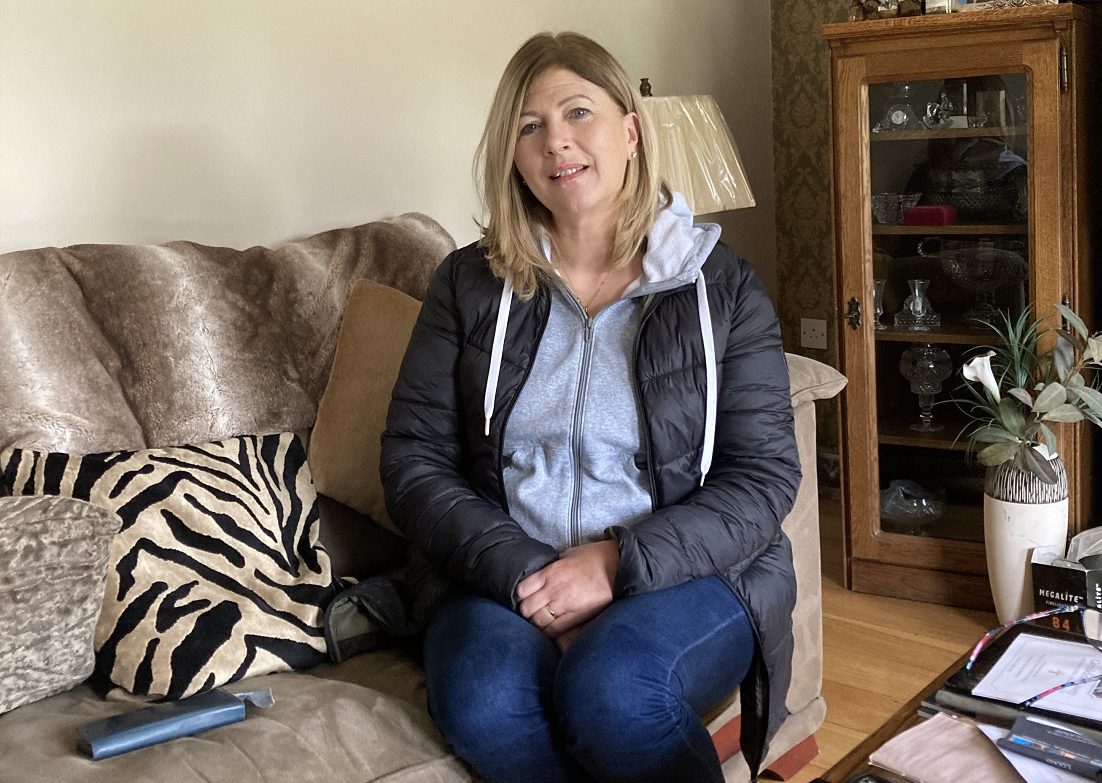 Bridget Mone at her home just outside Keady.

Becoming a funeral director was not a conscious choice for Keady woman Bridget Mone.

Eight years ago, she was a busy mum of five children aged 11-18, who also worked nights as a nurse in the urology ward of Craigavon Area Hospital.

Her husband Paul was a third generation undertaker in the family firm of Mone Funeral Directors and, although their home was a flurry of activity, it “worked”.

However, when Paul died suddenly in August 2014 at the age of just 53, Bridget was left not only shocked and grief-stricken but also having to deal with the business.

“In terms of sudden death, there was no time to think of it, or how the children were going to be reared,” she said.

“I personally never had any serious intention to keep the business. In terms of making a living, I know I would in time have gone back to nursing and rattled out a living or whatever we had to do.”

But as “fate or the Good Lord would have it”, Bridget (53) found that people who had lost a loved one continued to contact her.

“I sort of thought, ‘Why are people coming to me? I’m not an undertaker’,” she said.

“Paul’s brothers  – John, Arty and Oliver – were amazing at stepping in to help. The calls would have come here and because I wasn’t trained I would have gone and met the family and done the arrangements but the boys would have done the rest.

“I actually felt fraudulent. I didn’t feel as if I should have been there.” A happy memory – Bridget and Paul with their five children

By December 2014, Bridget, in what she says is probably a nursing mindset, began to think that if she was going to continue in the business, she had to be “accountable and responsible”.

“The most important thing for any family dealing with a death is how the person is presented to them and that led me to learn the art and science of being an embalmer,” she explained.

Bridget began her British Institute of Embalmers course, undertaking both the practical and theory examinations, and while most people do it over three to four years, she completed it in just one.

“From I started it, I just loved it, not just the embalming but the whole funeral business,” she said. “Death is unavoidable and as embalmers and funeral directors we are charged to help people.

“If someone has died from a protracted or terminal illness, to bring them back in a very restful, even semi-restored way, is wonderfully comforting to the family. How you present them will be a lasting memory for that family.”

In March 2019, she took six months unpaid leave from her job as a nurse for family reasons – she was still doing one night a week at that point.

However, when the time came for her to return, she decided it was the right time to leave the nursing profession and concentrate totally on her new vocation.

The funeral business is an unpredictable one, and one where you have to be on call 24 hours a day, yet Bridget does not see this as a burden.

“From Paul died we have never had a family holiday,” she said. “In September past, we went to a family wedding in Liverpool. During the meal I got a phone call and I got the first flight home.

“Our children – Laura, Eimear, Caolan, Ciara and Paula – have had to make massive sacrifices. Many an evening they came home and I wasn’t here making the dinner. Every one of them has had to help out.

“They have had to grow up very fast but they are good children.”

As well as the incredible support from extended family, Bridget is grateful to hearse driver Paddy Lappin, who helped out greatly after Paul’s death and retired just a few years ago, as well as current driver BJ Sheridan.

Having just lived through Covid-19 and the numerous restrictions of wakes and funerals, Bridget believes one of the most damaging and lasting legacies has been the early Executive ruling where people were taken straight from their place of death to their place of burial.

“I believe once you visualise, you can’t deny the death has happened, and it has to be incredibly hard for people who suffered a death where they didn’t see their loved one,” she said.

“In this community that I serve, the celebration of a funeral mass and then the natural procession to burial is hugely important.

“I think it is already complicating a lot of people’s grief and I believe it will take families a long time to process that. I just hope they have a bank full of happy memories.”

Bridget doesn’t believe in coincidence but says everything that has happened in her life has been “God-instances”.