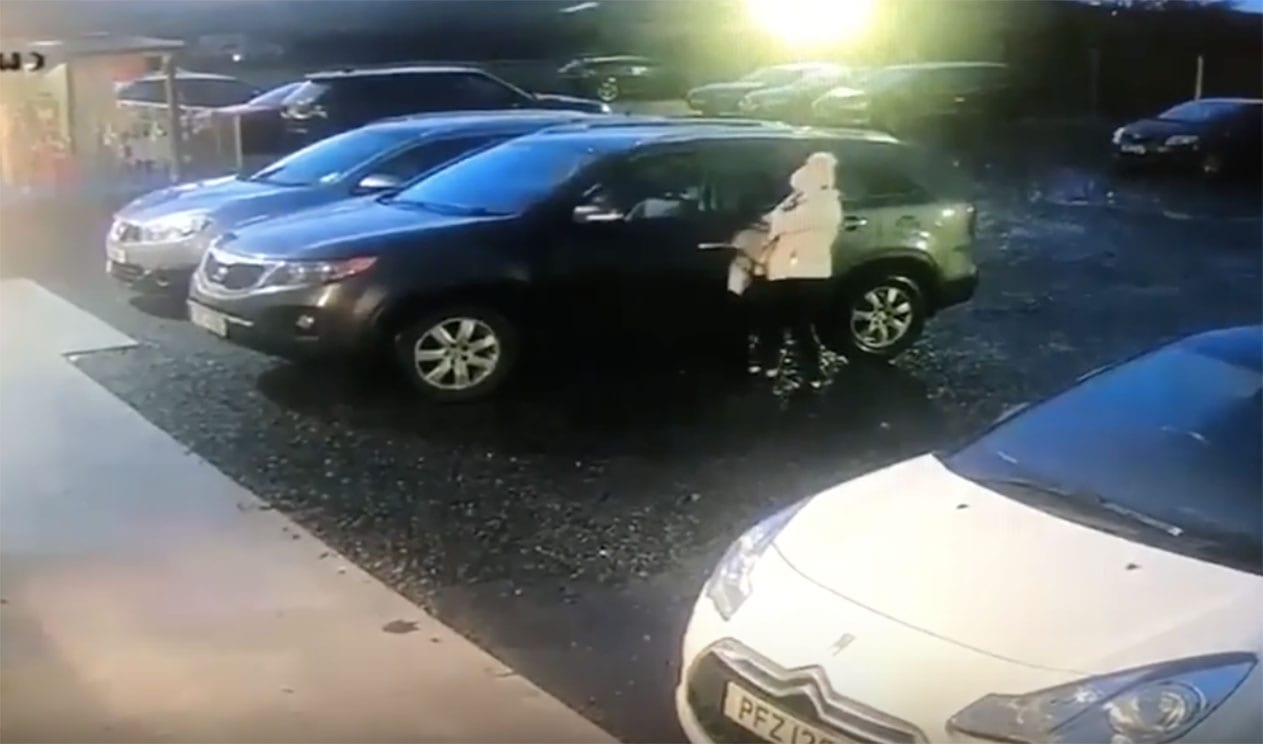 This is the moment a thief struck outside a nursery in south Armagh, approximately an hour before targeting premises in Keady – both of which were caught on CCTV.

At 5.15pm a car drove up close to the Happy Faces Day Care at Fords Cross in Silverbridge.

As a parent leaves her car ,for no more than 90 seconds, it is looted by the preying thief.

Posting the video on social media, the Day Care centre explained what happened.

“Yesterday evening at 5:13pm a parent pulled up to the very front door of the nursery and came in to collect their child.

“At 5:16pm this parent left Happy Faces. While this parent was in the nursery her car was robbed.

“These particular persons parked across the road and ran over into our car park and robbed a handbag and other items from this parent.

“Please ensure you lock your car at drop off and pick up as these people won’t stop.”

They warned: ‘This could easily have been a child that was lifted and not a handbag.”

Adding: “We have it all on camera and many images that we will pass on to appropriate services to ensure these people are caught. The car was a Silver Skoda superb so keep an eye out.”

Kings Baby Shop on the Darkley Road in Keady was targeted just over an hour later – by the same people.

They brazenly walked into the store around 6.50pm before making off with £2,000 worth of goods.

Police are currently investigating the incidents.

Inspector Downey said: “At around 5:10pm, it was reported that a purse was stolen from a car parked at premises at the Silverbridge Road area of Silverbridge yesterday evening.

“A number of women were witnessed acting suspiciously in the area at the time of the incident.

“Shortly before 5:55pm, it was reported that two women are believed to have taken a black Egg Jurassic pram from business premises in the Darkley Road area, Armagh.

“The females are believed to have made off towards the Newtownhamilton area in a silver saloon style car.

“At this stage, we are investigating a link between both incidents and enquiries are continuing.

“We would appeal to anyone who saw anything suspicious or who saw a silver Saloon style car at both incidents to contact police on 101, quoting reference number 1052 7/11/18. Alternatively, information can also be provided to the independent charity Crimestoppers on 0800 555 111 which is 100% anonymous and gives people the power to speak up and stop crime.”