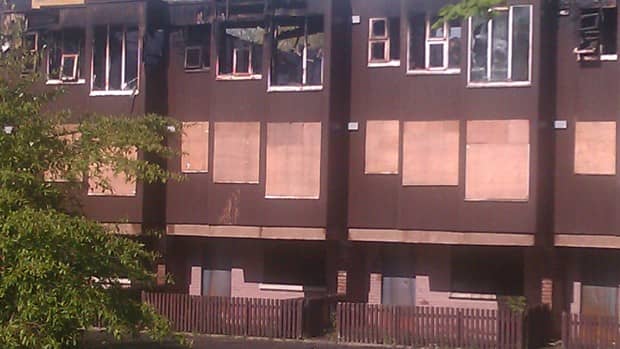 A BLOCK of flats in Craigavon – a haven for anti-social behaviour and with a reputation as a drug den – is in the process of being demolished.

It is costing £346,000 for the Aldervale flats to be flattened, and it followed a lengthy campaign to see the end of what many regarded as one of the worst housing areas in the Craigavon Borough.

When the last of the residents were rehomed, the flats were allowed to fall into a state of dereliction, an eyesore and a target of sustained vandalism.

There have been a number of arson attacks, three of the latest within the same week in May.

A spokesperson for the Housing Executive said: “Our contractors have been working over the last few weeks inside the flats in preparation for the demolition.

“There are 85 flats. The demolition was approved after a number of arson attacks which caused severe damage. Following demolition, the site will be grassed over.”

Martin Sweeney – chairman of the Aldervale Residents’ Association – described the old flats as a “blot on the landscape”, and said residents were campaigning for improvements to the remaining blocks in the area.

“Removing these blocks will help improve the image of the area,” he added.

Aldervale was built by the former Craigavon Development Commission in 1969 and comprised mainly bedsit accommodation. It primarily served the incoming professionals required for industry, schools and hospitals in the ‘new city’ of Craigavon at that time.

The Housing  Executive spokesperson added: “Originally very successful and popular with tenants, an extension of three blocks was added in 1977 to cope with demand. One block was an extension to the original front block and the other two were built as a terrace to the rear.

“However, over the years the flats became less popular, resulting in extremely low demand and high levels of voids.

“There were a number of improvements carried out to make the complex more popular, but these proved unsuccessful and the area became increasingly stigmatised and subject to serious vandalism.”