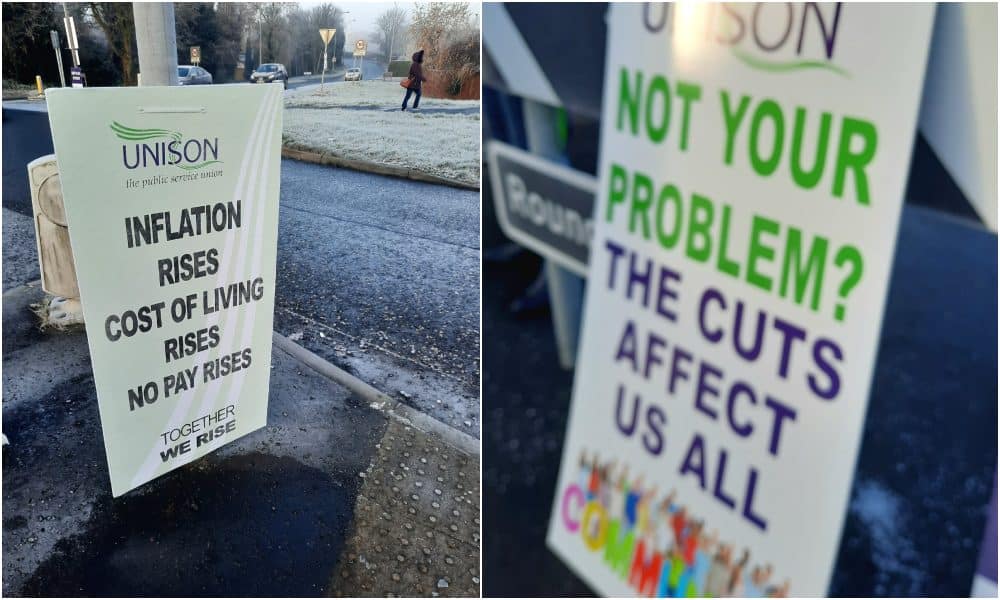 Craigavon Nipsa members out on strike on Monday

Already fragile health services will be further impaired by industrial action, the Department of Health has warned ahead of the strike tomorrow (Thursday) by the Royal College of Nursing (RCN).

And the department had said it is “extremely concerned” by the scale of the pressures on health and social care services, with more days of industrial action planned.

Members of the RCN union are set to walk out across Northern Ireland, England and Wales after the Health Secretary Steve Barclay “refused to discuss pay”.

On Monday, members of  Nipsa, Unison and GMB went out on strike and there will be further days of action by the unions, including a 24-hour walkout by the RCN next Tuesday.

The RCN has said the strikes this month could be the beginning of a longer period of action if formal pay negotiations either don’t happen or don’t result in a satisfactory outcome.

In a statement, the Department of Health said it “fully understands the frustration and deep concern of staff across health and social care, who have worked in extremely challenging circumstances over the last three years and continue to do so”.

In respect of tomorrow’s planned action by the RCN, it said intensive work is ongoing to mitigate the impact on patients where possible.

“There has been constructive partnership working between the RCN and the chief nursing officer and HSC Trust Directors of Nursing on patient safety issues, including derogations from strike action to maintain critical services,” a spokesperson said.

“However, as the department has previously stated, already fragile services will inevitably be further impaired by industrial action.

“There is particular concern at the cumulative impact of repeated strike days, at a time when the health service is facing what many regard as the most challenging winter in its history.

“The industrial dispute is a national dispute which is only resolvable at national level. Northern Ireland has a policy of pay parity with England for nurses and other HSC workers covered by the Agenda for Change framework.”

The department said it remains “extremely concerned” at the scale of the current pressures on health and social care services – and the impact this is having on patients, service users, carers and staff.

“The challenges being faced here are mirrored in neighbouring jurisdictions. It is the reality that there are no quick or simple solutions,” the spokesperson said.

“The focus of the HSC system remains on maximising its existing capacity to the greatest possible level and managing risk.

“Priorities include reducing ambulance handover times, relocating patients where clinically appropriate from Emergency Departments to other parts of hospitals, and achieving timely discharge of patients who are medically fit to leave hospital.

“While such measures are important and can make a difference on the ground, they will not by themselves resolve the fundamental problem at the heart of current pressures: the serious mismatch between the demand for care and the current capacity of the system to meet it.

“That can only be fixed by sustained and long-term action to secure greater capacity.”

The Southern Health and Social Care Trust has said there will be disruption to services on the days when industrial action is taking place days.

“We are working closely with the trade unions to protect our critical services and to minimise disruption to our patients and service users, as far as possible,” they said.