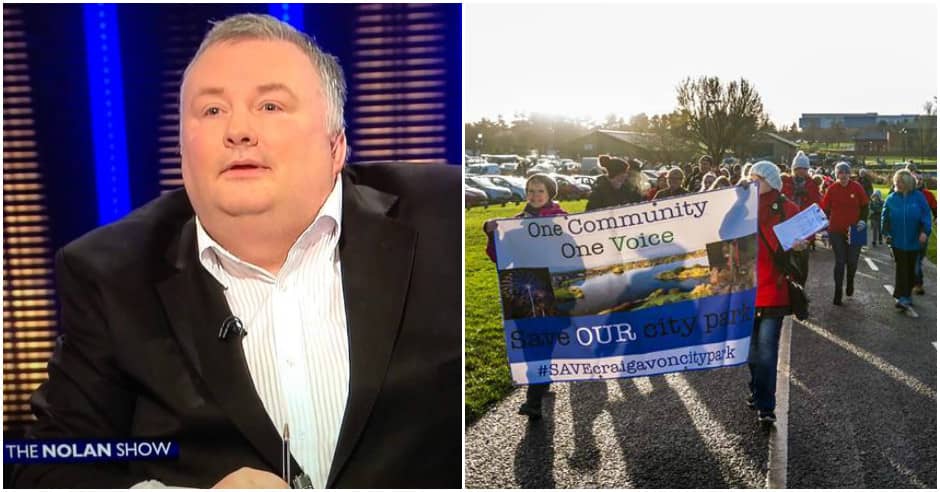 A group fervently protesting the Council’s role in the building of a new £30 million college campus have been invited onto the Nolan Show later next month.

Kelly Laverty, Secretary of Save Craigavon City Park and Lakes Residents Group, emailed Council Chief Executive Roger Wilson and its 41 elected representatives asking them to withdraw from the option to sell agreement with Southern Regional College.

The former Craigavon Council sold land to the SRC for £650,000 which the group feel “is a major conflict of interest as Council stands to benefit…if planning permission is granted”.

The letter continued: “In this instance we believe Craigavon can have a fabulous park and a fabulous College, but we do not have to destroy one to achieve the other. We invite each Party to meet with us to discuss the situation.”

Speaking to Armagh I, Ms Laverty stated: “The Nolan Show have been in touch to invite us to participate in an election special on February 15 and we have suggested that the Chief Executive attend with us to provide for balanced debate.”

She added: “Whether or not we get to ask our questions is another matter, but most definitely, if given the opportunity to speak, we will be asking why local government has intentionally disregarded our opinion and ignored our right to be consulted on a project of this magnitude.”

More than 3,000 people, which includes residents of Craigavon and park users, have signed a petition objecting to the current plans.

Cllr Declan McAlinden believes the planning decision should be passed to the Department of Infrastructure.

“The proposed development of the Southern Regional College is a significant development for the area, both in terms of capital investment but also in the young people of this area,” he said.

“Everyone locally recognises the need for and welcomes the investment in a new, modern state of the art facility. This is an investment in the future generations of this area.

“However I am mindful that the proposed location at the Lakes in Craigavon has caused some concern in the local community.

“After a detailed process, the Southern Regional College purchased the site from the old Craigavon Borough Council. I believe it could be argued that the council have a conflict of interest in this case and I don’t believe they should therefore be the determining body.

“The Department of Infrastructure should call in the Southern Regional College application, the same way they intend to do with the new application for the redevelopment of Casement Park.

“This will mean an application will be dealt with in a fair, open and transparent way. Council, with any perceived potential conflict of interest, will play no part in the application. I believe this will give residents the confidence that their concerns are listened to independently.”