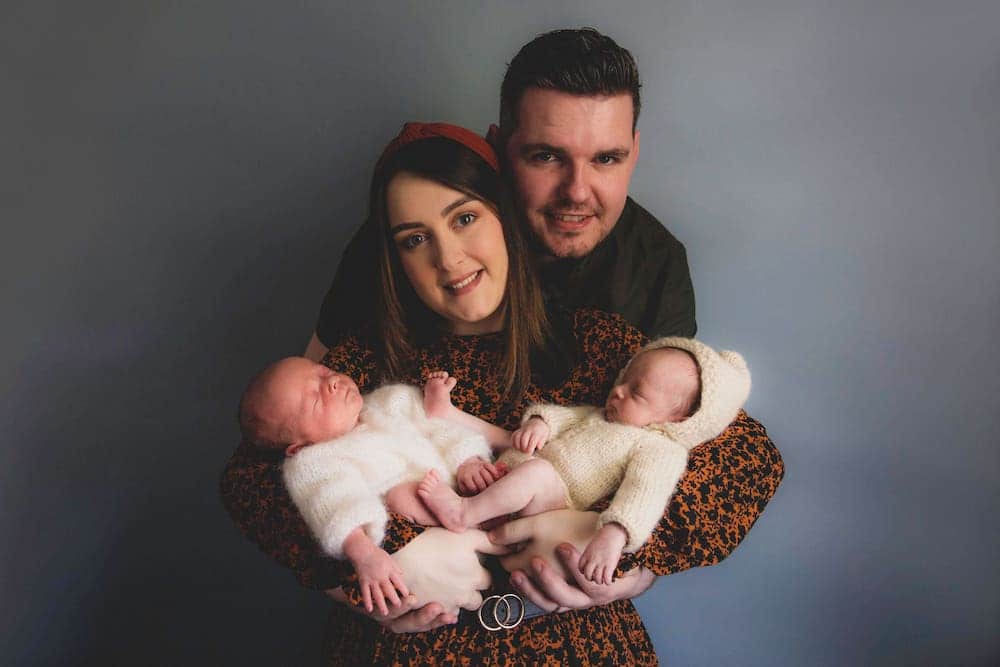 New mum of twin boys Kirstie Fox from Bleary is putting her best foot forward on August 8 to walk 10K to raise money for the charity Twins Trust and research into the condition TTTS (twin-to-twin transfusion syndrome).

Kirstie thought she had escaped this life-threatening condition after reaching 32 weeks in her pregnancy as TTTS is often picked up on scans between 16 and 24 weeks.

“As soon as I learned I was expecting identical twins who shared a placenta I was told about this condition,” said Kirstie.

“I did some research and knew about the symptoms but thought things were OK.”

She added: “I’d had a few health problems myself during the pregnancy, including pre-eclampsia and I think the healthcare team were more worried about me at that time.”

A scan at 30-31 weeks showed a small size difference between the boys, but it was difficult to measure Caiden’s head as he had his hands in front of his face. The boys were also in breech position at this time.

“Luckily I was scanned again at 32 weeks by my consultant who had seen me quite a few times and picked up significant growth difference.

“I was given steroids to help the boys’ lungs develop and closely monitored until they were delivered by c-section at 36 weeks.

“Both were tiny, but perfect. Eoin was 5lbs and Caiden weighed just 3½ lbs and spent a week in neonatal care.

“I should have received an iron transfusion before birth, but things happened quickly towards the end and I had to have it afterwards.

“The three of us stayed in hospital and the family didn’t meet the boys for a week. Now we’re home and the boys are just doing brilliantly. Caiden is nearly the same weight as Eoin and they are just over three months old.

“I can’t wait to do the walk – we’ll spread it over the weekend of August 7 and 8 and the whole family will be coming, including the boys in their buggy. Hopefully the weather will be grand and we can have a picnic too.

“Our experience of TTTS was pretty scary, especially when we thought we’d got past that point, but when you are closely monitored as I was, complications can be picked up and acted upon.”

TTTS is a rare but life-threatening condition that can affect identical twins that share a placenta. Part of the blood flow is diverted from one ‘donor’ twin to the ‘recipient’ twin.

A lack of blood supply can affect the donor twin’s growth, so they are smaller than average with the larger ‘recipient’ twin suffering heart strain as it works harder to cope with the extra blood supply.

The recipient twin then develops excess fluid to compensate for the excess blood. Laser therapy can help, sealing off blood vessels and then draining excess fluid.