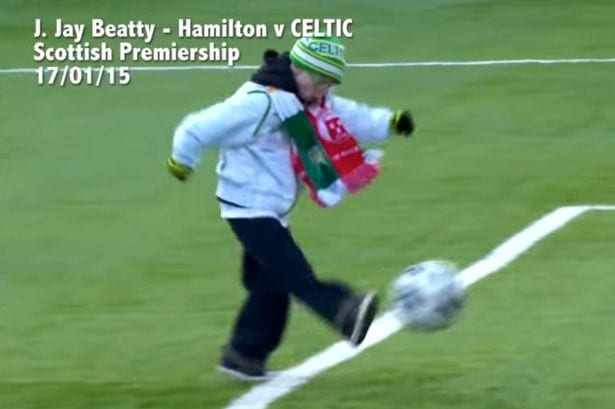 Celtic superfan Jay Beatty has WON the Scottish Professional Football League’s ‘Goal of the Month’ after blowing away the opposition.

The 11-year-old Lurgan boy, who has Down’s Syndrome, has become a hero of the Hoops and the loyal fans.

And the news of his history-making win will be greeted with delight.

It was during a VIP visit that the Hoops’ mad lad got his moment in the spotlight at the mid-month clash between Celtic and Hamilton Accies.

Thanks to goals by Adam Matthews and Liam Henderson, Celtic were celebrating a 2-0 victory at New Douglas Park.

But Hamilton later tweeted and allowed a goal scored by Jay during half-time to be counted, declaring the official result 3-0.

That put Jay alongside some of the biggest names in Scottish football for the ultimate accolade – and his own bit of history.

Celtic FC even used their official Facebook page to encourage people to cast their votes for the County Armagh youngster, which supporters did by posting comments under the official video on the SPFL’s Youtube channel.

And vote they did, with Jay’s unstinting popularity clear to be seen.

“Jay makes everyone that wee bit happier – what a brilliant wee Bhoy! He has my vote,” wrote won, while another hailed him “a wee legend”.

“I met with Jay a few times that day,” said one fan, recalling the afternoon of the historic strike.

“He’s a cracking wee boy. Heart of gold and a smile that will melt your heart. He wins my goal of the month every time!”

The comments – hundreds in the same vein – were overwhelming and, as voting closed at tea-time on Wednesday, the SPFL conceded even then that “wee Jay Beatty is way out in front”.

The shortlist featured some cracking strikes from from the likes of Greg Stewart, Gary Mackay-Steven, Adam Rooney and, of course, the wee man himself!

The 11-year-old has won the hearts of all, with an army of adoring fans, including fellow Lurgan native Neil Lennon, and Georgios Samaras, who carried him aloft as Celtic celebrated their title glory last season.

Now after this latest coup, this is one Celtic superfan with almost as many fans as Celtic themselves!