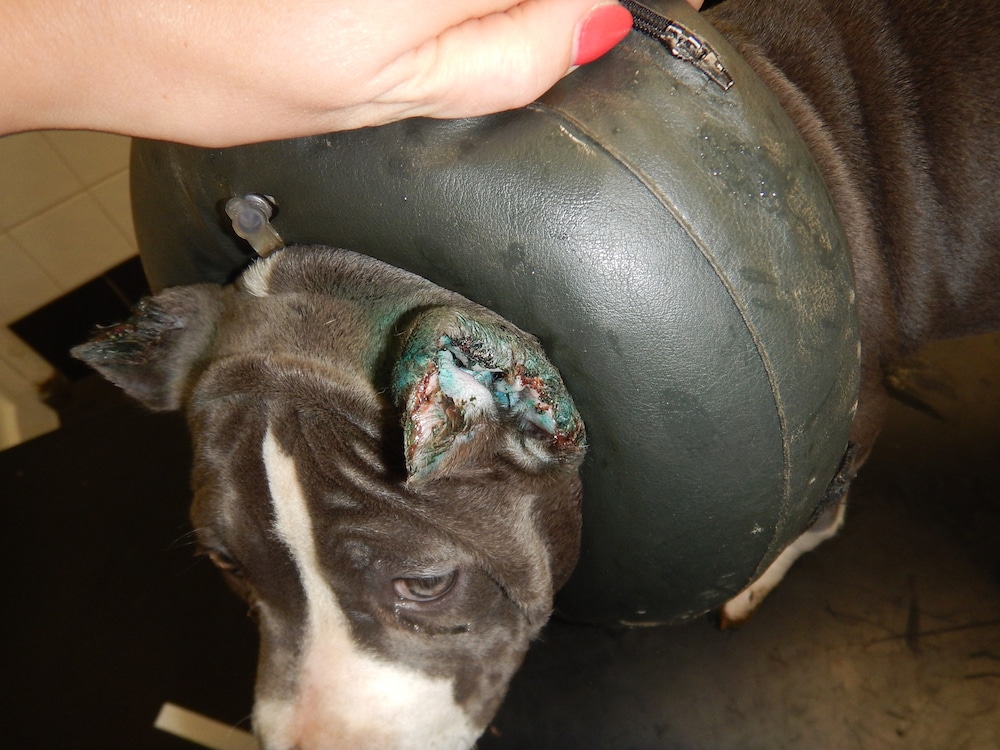 The American Bully Puppy, which was approximately 10 weeks old, showed evidence that a prohibited procedure had been carried out on its ears.

A man and woman who caused unnecessary suffering to two dogs have been banned from keeping animals for five years.

Ryan Potts of Pineview Court, Gilford and Margaret Doherty of Edenderry Park in Banbridge have had convictions of animal welfare offences upheld at an appeal heard in Newry County Court on Wednesday.

Ryan Potts was convicted of causing unnecessary suffering to two dogs and permitting a banned procedure to be carried out on the ear tissue of a dog, otherwise known as ‘ear cropping’.

Doherty was also convicted of permitting the dog’s ears to be cropped.

Enforcement action was taken by Armagh City Banbridge and Craigavon Borough Council following a complaint received in October 2017 from a member of the public.

Acting on the complaint, Animal Welfare Officers visited a property in Pineview Court, Gilford after obtaining a search warrant.

Upon investigation Officers were concerned for the welfare of a blue American Bully type puppy and a Black Patterdale Terrier type found at the property.

The American Bully Puppy, which was approximately 10 weeks old, showed evidence that a prohibited procedure had been carried out on its ears, which had been stitched with blue suture thread. Veterinary evidence suggested that the injuries had been recently caused to the dog inflicted approximately seven days earlier.

The Patterdale Terrier type had a severe injury to its lower jaw which had been left untreated and become infected. The Council’s attending vet found that this dog was suffering and due to the severity of the wound the animal had to be humanely destroyed.

Potts’ conviction was upheld for causing unnecessary suffering to the two dogs and for permitting the ear cropping of the American Bully. He was given a total fine of £1000, ordered to pay full veterinary and boarding costs totalling £2,293.50 plus legal costs of £500. The Patterdale Terrier type suffered a severe injury to its lower jaw which had been left untreated and become infected.

Doherty was fined £500 in respect of permitting the ear cropping to the American Bully dog that had been registered in her name, and ordered to pay legal costs of £200.

Both defendants were presented with a Disqualification Order banning them from keeping any animal for five years.

A council spokesperson commented: “Ear cropping is illegal. There is no benefit to the dog and it is purely a cosmetic procedure which is painful to the dog, carries risk of infection and takes weeks to heal. We as a council will do all in our power to bring enforcement measures to those that cause such suffering to a dog or indeed fail to care for the welfare of animals .

“There is no excuse, under any circumstances, for anyone to cause harm or neglect to any animal. Councils across Northern Ireland will continue to pursue those that are guilty of this disgraceful act. We would ask if anyone has any concerns regarding the safety or welfare of an animal to report it to the council on T: 028 3751 5800 or email animalwelfare@armaghbanbridgecraigavon.gov.uk”