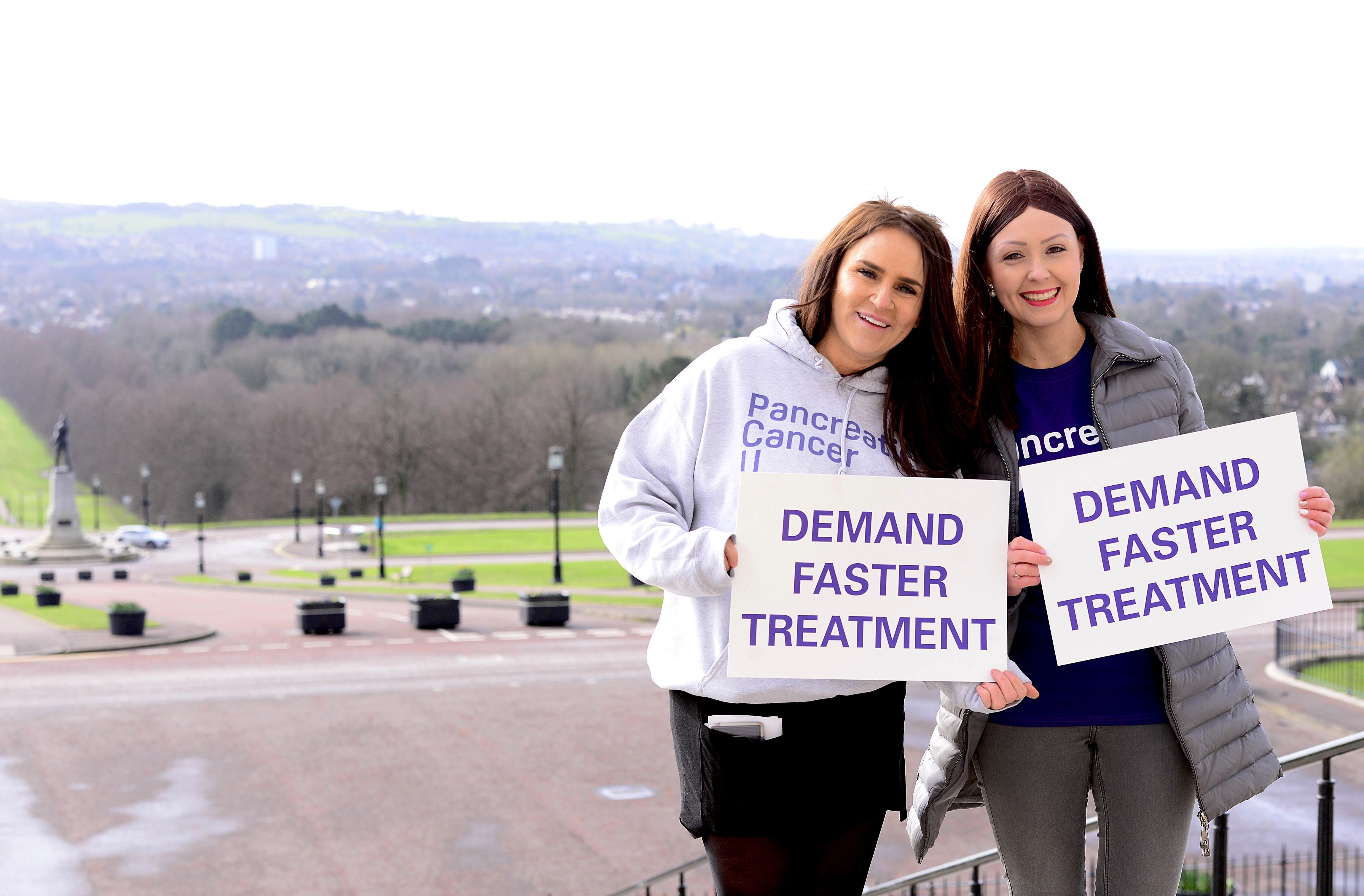 A County Armagh woman who lost her grandmother to pancreatic cancer has joined other campaigners at Stormont to demand faster treatment.

Victoria Poole, from Scarva, joined representatives, supporters from Pancreatic Cancer UK (PCUK) and MLAs at the Northern Ireland Assembly to deliver a petition to the Permanent Secretary for the Department of Health, Richard Pengelly.

The ‘Demand Faster Treatment’ petition – part of a campaign by the charity Pancreatic Cancer UK – attracted over 100,000 signatures.

It calls for the Government to set a new ambition to begin treatment for all pancreatic cancer patients within 20 days of diagnosis by 2024.

Three in four patients with pancreatic cancer die within a year of diagnosis, making it the quickest killing cancer.

Pancreatic cancer is the deadliest common cancer and is often diagnosed late, and progresses quickly.

Three in four people do not survive a year after diagnosis which is why Victoria is supporting PCUK’s call for UK governments to set an ambition that pancreatic cancer patients receive faster treatment, within 20 days from diagnosis by 2024.

Victoria’s first experience of cancer in her family ended in heartbreak when her grandmother died from pancreatic cancer in June 2014 – just seven months after being diagnosed and told that her condition was terminal.

Her pancreatic cancer was diagnosed at an advanced stage and was inoperable.

Only 6.2 per cent of people with pancreatic cancer, in Northern Ireland, live beyond five years.

Around 250 people in Northern Ireland are diagnosed with the disease every year and Pancreatic Cancer UK believe too many people are being denied surgery – their only chance of survival – because the extremely aggressive cancer spreads while they await treatment.

Northern Ireland cancer campaigner and PCUK supporter, Victoria said: “Pancreatic cancer is often diagnosed late and progresses quickly. Too many people never receive active treatment which means they don’t get a chance to fight the disease and live longer.

“That’s why I’m supporting PCUK’s call for UK Governments to treat pancreatic cancer as a cancer emergency, and to make sure that people with the disease receive treatment within 20 days of diagnosis.

“I very much welcome the Department of Health’s recent announcement commissioning a new cancer strategy here. However, time is very precious when it comes to our health policy especially where people’s lives are concerned.

“As health is a devolved matter in Northern Ireland it is critical that a functioning government is restored as soon as possible so that policy progress can be made here.

Diana Jupp, Chief Executive of Pancreatic Cancer UK, added: “Too many pancreatic cancer patients are being denied their only chance of survival because they are simply not being treated fast enough.

“The fact that 100,000 people have joined us in taking a stand shows just how close this issue is to the hearts of people across the UK.

“It’s imperative we see urgent action from Government. We owe it to all those affected by pancreatic cancer to be more ambitious and make sure that everyone is treated within 20 days of diagnosis.

“The Department of Health recently announced that it is to commission a new cancer strategy for Northern Ireland.

“The central goal of the new strategy will be to identify new ways of working to secure further advances across cancer care, and the Department has highlighted that it will work with patients, staff and cancer charities in its development.

“Discussions are planned with local cancer charity representatives on the commissioning of the strategy and the potential development of a taskforce model.

“Decisions on the implementation of a new strategy would however be for a future Health Minister.

“The petition and public campaign for Demand Faster Treatment has now ended and PCUK are continuing to work with Governments across the UK and clinicians to argue for and develop ways to develop faster treatment for pancreatic cancer.”