'I am so proud of her. She has worked hard for this and it's great to see that she's getting the recognition, not just for her but for the club' 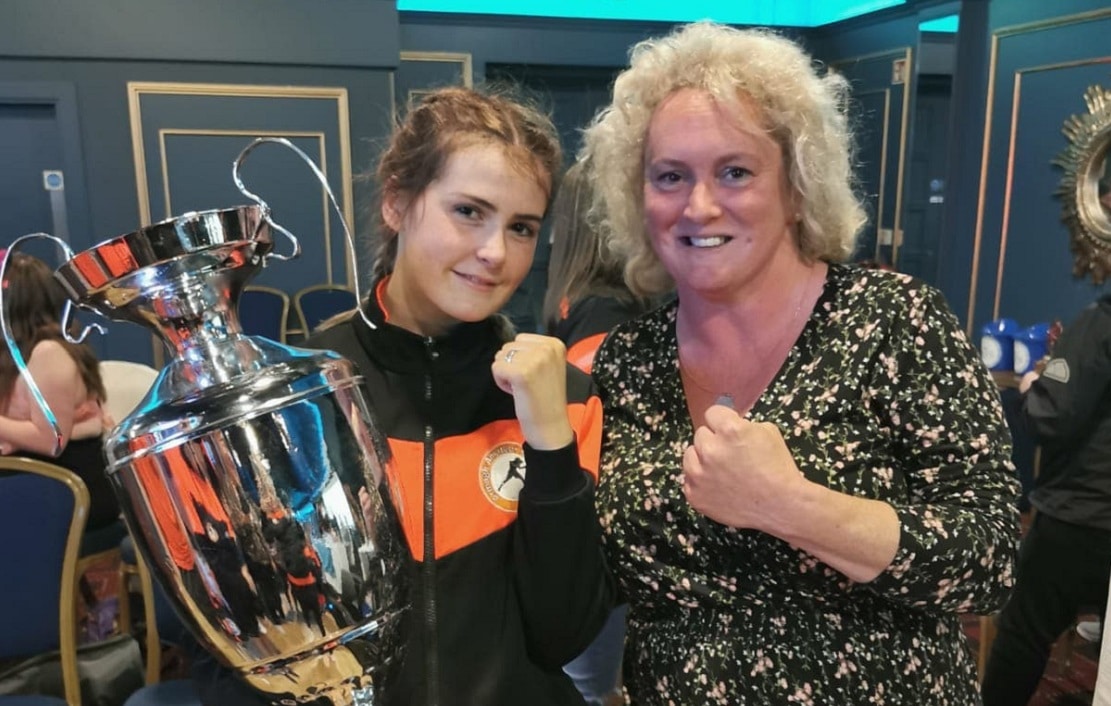 Since Aoife Dougan (15) became Armagh’s first female All-Ireland boxing champion, the teenager has become somewhat of an ambassador for sport.

Aoife, a member of Armagh Amateur Boxing Club, claimed the Junior 1 48kg  Title at the National Stadium after stopping her opponent in the second round back in March this year.

And it has been all go since then, with the teenager’s diary packed with speaking and civic engagements and a chance to inspire future generations of sportsmen and sportswomen.

Last Thursday, she was invited to Dublin by SportIreland as a guest speaker at the new flagship facility and national indoor arena in Blanchardstown, where she gave a talk about her journey so far.

The young Armagh woman said she was “thrilled”  to meet Kellie and even had her All-Ireland medal signed by the Dubliner, who is only the second Irish female boxer ever to win an Olympic medal.

Speaking to Armagh I, Aoife mum Charlene, said: “Kellie is so down-to-earth and she spent about 30 minutes with Aoife giving her advice and chatting to her.

The young boxer was further honoured by the Lord Mayor, Alderman Glenn Barr with a civic reception held on Tuesday evening at Craigavon Civic Centre.

“He’s a nice man. He was a boxer himself so him and Aoife sat and shared stories,” added Charlene.

“It was a bit of a family night out as Aoife’s granddad and nanny also came along as well as Ryan Grimley and Chloe Clarke, two other boxers from the club.” Prior to this latest engagement, Aoife went along to St Mary’s Primary School in Pomeroy to speak at the P6 and P7 careers day.

“Aoife enjoys public speaking and enjoys telling people about her success to date to inspire them,” said Charlene.

“I am so proud of her. She has worked hard for this and it’s great to see that she’s getting the recognition, not just for her but for the club.

“They all work so hard in the boxing club.” Lord Mayor of Armagh City, Banbridge and Craigavon, Alderman Glenn Barr, takes one on the chin, when he met All Ireland and Ulster Boxing Champion, Aoife Dougan from Armagh.

Meanwhile, Aoife was presented with the Cole Murray Memorial Cup on Saturday evening at a charity tournament held in Armagh City Hotel in aid of PIPS.

The cup goes to someone identified within the club as overall boxer of the year – not necessarily the best boxer but someone who demonstrates overall dedication to the club.

Speaking to Armagh I, Chloe Clarke, one of the clubs coaches said: “Aoife has always been an integral part of the Armagh Boxing Club but since winning the All Ireland Title she is certainly seen as a role model for our younger boxers, which is fantastic for them to see first hand that if you are dedicated and train hard then, you can succeed”

“Aoife hasn’t had it easy and had her fair share of knock backs during the years but has used this to fuel the fire to succeed which is a testament to her and she has become a great ambassador for females in sport”.

“As a club we were proud to be able to present Aoife with the Cole Murray Memorial cup for the best boxer of this year and wish her the very best in the upcoming Cadets”.