'I go to the Garden of Rest practically every day. Anyone can go and sit there and spend time with him. I think Tony would like that' 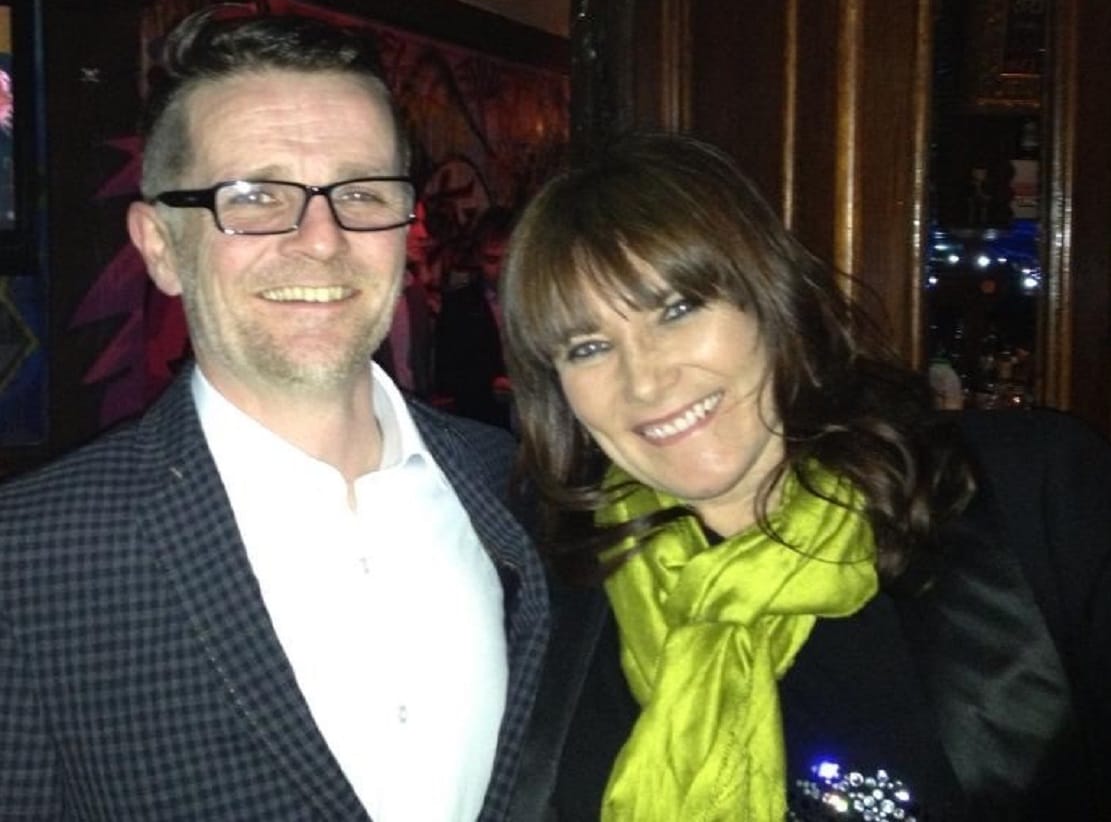 Tony and Wendy enjoying a night out in Belfast

It has been just one month since Wendy Hughes’ beloved husband Tony died suddenly, and in that time, amid the tears and the crushing grief, she has been remembering the good times they shared.

Tony’s death, at the age of just 57, shocked the entire Armagh community. Many knew him as a popular and respected businessman but for Wendy, Tony was simply her soulmate and the man she loved.

The pair had been together for almost 11 years and married for eight and Wendy says they were, without doubt, “the happiest years of my life”.

It was a second marriage for both of them, and the fact they were from different religious traditions was never an issue.

In fact, recalling how they met, Wendy says it was fate that brought them together.

“Tony said he remembered standing at the end of Thomas Street and wasn’t sure whether to turn right and go home or turn left and go to the Market Place.

“He stood there and contemplated what he should do and then he decided just to go up to the theatre and that’s the night we started to be a couple.

“At his cremation, one of the songs I had played was Penguin by Christina Perri. That was the first CD he bought me because penguins mate for life. The lyrics go, ‘ Love like this may come once… Baby, it’s fate not luck’.

“To me that was fate, the night he took the left instead of the right. The connection between Tony and I was incredible.” Tony enjoying the last book he read, The Serendipity Mindset

They made the most of their time together, travelling widely to places such as Vietnam, Japan, Russia and Tuscany. But they also enjoyed quiet nights at home together, curled up with their four dogs, at ease and happy in each other’s company.

Tony loved dancing too and he and Wendy used to dance around the kitchen.

“We had so many plans,” says Wendy, who is speaking to Armagh I from The Parkland restaurant in County Armagh Golf Club, a business which Tony began just 18 months previously and whose award-winning team he was immensely proud of.

“We were renovating our home and Tony was passionate about it. We had just got home from a break in Dublin when Tony died. He was also potentially taking on another business and when we were away we were walking around getting ideas and making plans,” she explains.

“Tony was a really charitable person. He had so much to give to the world. He was the kindest man I ever met. He was selfless, he put everybody else before himself but he was unassuming and didn’t like fuss.

“He was always so supportive and thoughtful. When I came home at night after work, he would have a magazine and a cup with a teabag in it and a note saying ‘I’ll be home soon. Just add water. Love always, T’.” Tony at cookery school in Marrakesh

One of Tony’s great interests was current affairs and politics and, with Wendy working in local government, Tony would regularly have sent her snapshots of what was happening in other councils.

Along with a few of his biker friends he was a member of a WhatsApp group called The Thinkers and, says Wendy, talked about everything from philosophy to books and generally put the world to rights.

“You always knew he was coming home and now he’s not and that’s very difficult to take,” says Wendy.

“It’s the memories I take comfort from. I can feel him all around me but at the moment it’s difficult.”

However, one memory that Wendy is struggling with is finding Tony on the day he died.

“He had phoned me at 12.50 because the man had just come to measure for the carpet. That was the last phone call I had with him and I reckon he died at one o’clock,” she says.

Wendy had tried to contact him again on the way home from work but wasn’t unduly worried when she couldn’t, so she went on ahead to the gym.

However, on arriving home, she called his name before finding. He had suffered a brain haemorrhage. Tony walking with his beloved dogs on the Mall

“I know he would want me to continue on with life but at the moment it’s hard. When you find a happiness and it’s snatched away from you,” says Wendy, who is attending grief counselling.

Wendy has been comforted by people’s kindness – thoughts and actions too numerous to mention – while her sister Jean and brother-in-law Ducksie have been her “rock”.

One of  her greatest consolations at present is visiting the Garden of Rest at St Mark’s Parish Church in the city where Tony’s ashes were buried following the celebration of his life at St Patrick’s Cathedral.

“I have been there practically every day. It’s not an elaborate place but it’s extremely peaceful,” she explains.

“There are two benches where you can sit and get the morning sun and just forget about the rest of the world.

The garden was created by Wendy’s family in memory of their mum and dad Jack and Nell Frazer who were devout members of the church. The Garden of Rest where Tony’s ashes are buried

Says Wendy: “There’s a pathway in the shape of a Celtic cross and that’s a symbol of knowledge, strength and compassion.

“My sister just added a bird bath during the summer and we have a weeping willow and some other parishioners have donated cherry blossom trees in memory of loved ones buried there.

“The verse on the plinth reads, ‘Come onto Me all You who are heavy laden and I will give you peace’ which is really lovely.”

She added: “Anyone can go and sit there and spend time with him. I think Tony would like that.”