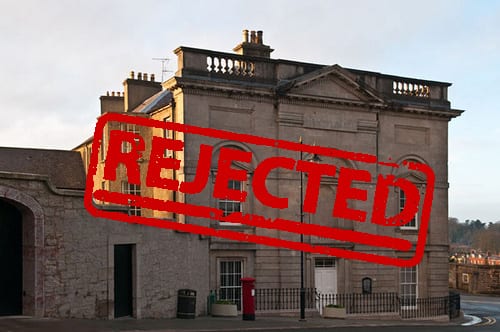 A bid for funding towards the multi-million pound redevelopment of Armagh Public Library has been turned down, Armagh I can reveal.

We first reported in June the plans to undertake restoration work as part of an overall project to ‘open up’ the library.

An earlier figure in the region of £2.5 million had been given and a bid for cash was submitted to the Heritage Lottery Fund.

Armagh City, Banbridge and Craigavon Borough Council also agreed to write a letter in support of the development plans to submit with the application.

But the Heritage Lottery Fund’s Board – sitting in London – has rejected the appeal for help.

It is the second blow for the city dished out by the Heritage Lottery Fund in recent days.

Just last week we reported how St Patrick’s RC Cathedral had been turned down for money towards the cost of essential repairs to the roof there.

This latest bombshell will come as a huge blow in the years-long drive to develop at the Public Library.

For years volunteers have been working to raise funding and it was hoped that the HLF would weigh in to allow the redevelopment proposals to proceed.

The Armagh Public Library – opposite St Patrick’s Church of Ireland Cathedral – is one of the oldest libraries on the island and certainly the oldest in Northern Ireland.

It was founded by Archbishop Richard Robinson, who had lived at the Palace in Armagh, in 1771, and it had been his vision to create a university in the city, with the Public Library part of his plans for that.

The Public Library already relies heavily on external funding and has been financially supported in recent years by the Northern Ireland Tourist Board, Pilgrim Trust, Armagh Council, the Landfill Community Fund, the Northern Ireland Museums Council – as it is also classified as a museum – and the Heritage Lottery Fund.

In 2012, Armagh City and District Council co-funded a feasibility study for a development and fundraising campaign for Armagh Public Library.

The Library – an independent body with charitable status – has hopes to realise a significant development so it can more than double the area accessible to the public.

This aim has been to allow the display of collections, of which only a fraction can currently be accessed by the public at the present museum at No 5 Vicars’ Hill, which was the former registry, and in The Long Room.

The historic building was designed by Thomas Cooley and is home to both the Library and the residence of the Keeper, currently Dean Gregory Dunstan.

A gallery – known as the Long Room – was added to the main public area in 1839, which was to accommodate the growing collections. It was followed nine years later by an extension on either side of the original building.

Armagh City, Banbridge and Craigavon Borough Council had agreed to write a letter – on the request of the Keeper – to support a funding application to the Heritage Lottery Fund.

The news will be relayed to the applicant. It is not known if a fresh bid can be submitted or if alternative funding sources will now be explored.

It was awarded to “fund the conservation of the Library’s books for future generations, improve storage for the collections and refurbish and upgrade the building itself”.

The Library’s collection of books is still held in the original building. The collection includes historic books including two copies of Gulliver’s Travels with Swift’s own handwritten amendments.

After carrying out a condition survey on the book collection, some books were identified as having ‘major damage’. This project – 17 years ago – focused on repairing and rebinding these books. Plans also included protecting the collections in special made-to-measure boxes, portfolios and cases.

But this latest bid for an overall redevelopment has not been so lucky in drawing down the money to see the project through.