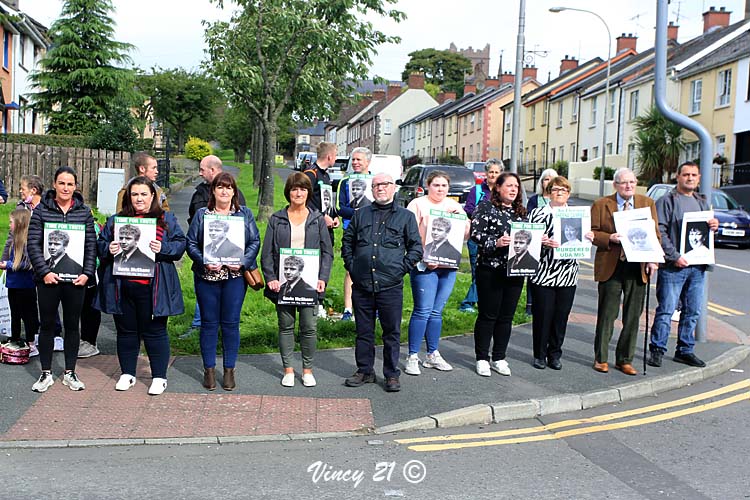 Almost 200 people have gathered at Irish Street corner in Armagh today as part of a national series of ‘Time for Truth’ pickets taking place across Ireland – over 40 rallies are taking place.

Family members of victims who were murdered during the conflict attended and held photos of their loved ones.

The rally heard calls for the British Government to immediately scrap their recently published legacy proposals which will shut down conflict related prosecutions and convictions, providing an amnesty for State killers. Speaking at the rally, Human Rights advocate and author of ‘Lethal Allies’, Anne Cadwallader said: “I know there are families here today who have campaigned for decades to get to the truth about why their loved-ones were killed. We have started and we are going all the way.

“That is why the opposition – successive British governments – having been backed into a corner by campaigning and through legal action, have been forced onto the defensive. We have lifted the carpet and exposed the dirt underneath.

“Here in Armagh, victims of the Glenanne Gang and other collusive gangs have publicly shamed them, in Ireland North and South, in Britain, in America, Australia and elsewhere.” “It would close down inquests, civil actions, the Police Ombudsman and possibly Jon Boutcher’s inquiries into the Stakeknife and Glenanne Gang outrages – and other state killings. The proposals will close down each and every avenue to justice for bereaved families.

“We have shown that some semblance of truth and justice can be achieved. Let’s look at our successes: Bloody Sunday, Ballymurphy, the McAnespie family’s legal action on behalf of Aidan, the Cunningham family’s long battle on behalf of John Pat. The list goes on where families have shown they will not give up. In conclusion, Ms Cadwallader said: “The Stormont House Agreement was not perfect, but it would have been a huge step forward. By delaying its implementation, London has allowed some of the parties, who agreed it, to resile from their positions.

“The recently-retired Lord Chief Justice, Declan Morgan, had a five-year plan for holding all outstanding inquests.
These plans should proceed and the Police Ombudsman should be fully-resourced so all those families in the long queue, who have not even been given a date for their start of their inquiry, can hope again.”