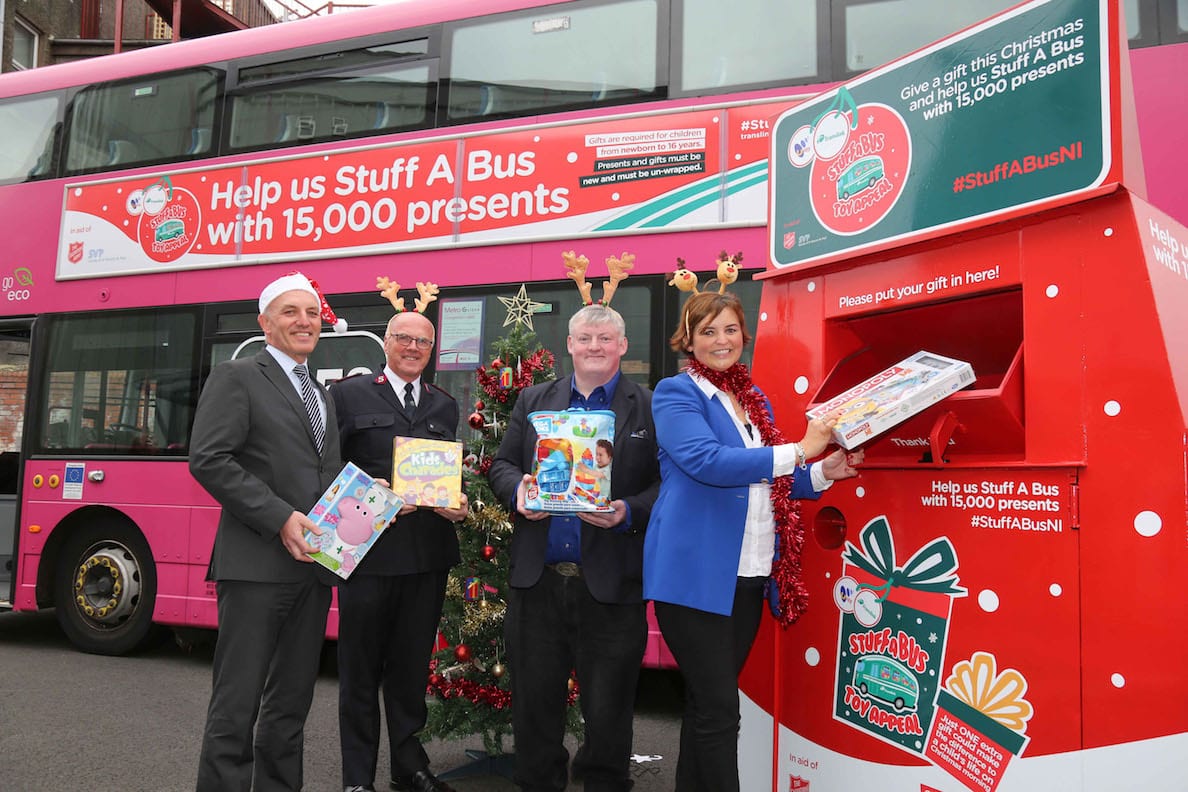 Armagh Bus Station is just one of the many locations across Northern Ireland where people can donate gifts to The Salvation Army and St Vincent de Paul’s (SVP) annual Christmas Family Appeal, which is running from November 19 to December 18.

The campaign, which is aimed at ensuring all disadvantaged children in Northern Ireland have a present to open this Christmas, is supported by Translink and U105 through their ‘Stuff A Bus’ initiative, in which they are aiming to fill a double decker with 15,000 gifts for underprivileged children.

The ‘Stuff A Bus’ appeal, launched for the first-time last year, exceeded its target of 10,000 donations and stuffed two single decker buses with more than 12,000 presents, thanks to the generosity of Translink customers, staff and U105’s listeners.

Now back for its second year, the organisations are calling on people’s support to stuff a double decker with 15,000 toys and gifts.

This year Translink has increased drop off points with collection bins in 15 bus and train stations, including Armagh Bus Station, and both Gordon’s Chemists and Tesco stores across the province are supporting the initiative by placing collection trolleys for the Appeal in stores. Donations can also, for the first time, be left at the Visit Belfast Welcome Centre in the city centre.

In total, as part of the Family Appeal 2017, more than 50,000 gifts were distributed to families in need locally.

The Salvation Army and SVP are hoping that this year’s annual festive appeal, now in its 39th year, will be the biggest ever, helping even more people in need this Christmas.

Major Paul Kingscott, the Salvation Army’s divisional leader, said: “As a church and charity, we are inspired by the Christmas message to reach out to people in need.

“The Family Appeal allows us to help thousands of children and young people in Northern Ireland.

“Our team of volunteers will be working hard to make sure the generous gifts we receive go to families who might otherwise go without. It’s a special campaign and we are delighted to have the continued support of Translink and U105.”

Speaking at the launch, Archie Kinney, Regional Vice President for St Vincent de Paul, said: “The effects of poverty don’t stop just because it’s Christmas, they endure throughout the year. This Appeal means so much to the families and groups who receive our donations of gifts as they are seeing smiles on little ones’ faces on Christmas Day rather than tears and anguish, which is felt ten-fold by the parents who are unable to provide for their children.

“This year it is easier than ever to donate to the Family Appeal with drop off points dotted right across the province; alternatively, gifts can be left at any Salvation Army or SVP location or shop. It is wonderful to have such supportive partners in Translink and U105 and we are grateful for their enthusiasm for the Appeal and hope that the double decker is jam-packed with presents as part of the ‘Stuff a Bus’ element of the campaign.

“Over the years the Family Appeal has gone from strength to strength and we never cease to be humbled by the kindness and generosity of the people and businesses of Northern Ireland. We had our most successful Appeal ever last year and are hopeful there will be a record number of donated gifts in 2018. All donations no matter how small, are so much appreciated and will make a difference this Christmas.”

Family Appeal drop off points will be in place at 15 Translink bus and train stations across the province.

Ian Campbell, Acting Director of Service Operations, Translink, said: “Translink is pleased to support the launch the Stuff A Bus Toy Appeal, now in its second year, in aid of two fantastic charities. We’re very proud of the initiative and we believe it is a wonderful way to act in the true spirit of Christmas and give a little something back to disadvantaged children and young people who live here.

“We set ourselves a very ambitious target last year and we were completely overwhelmed by the generosity of our customers, staff and people of Northern Ireland. This Christmas, we’re building on that success by doubling our drop-off points in a bid to stuff a double decker bus full of 15,000 gifts!

“It’s easy to take part; all you need to do is buy one extra gift before December 18 and hand it into one of our many toy banks. Visit our website for a full list of participating stations.”

Gift donations for children aged from newborn to 16 years are welcome at all SVP and Salvation Army locations as well as in Tesco stores, Gordons Chemists, Visit Belfast Welcome Centre and at the following Translink bus and rail stations:

All gifts must be new and unwrapped and the Appeal would especially welcome donations for older boys and girls; such as gift vouchers, board games, selection boxes, and toiletries.

For more information go to www.salvationarmy.org.uk/familyappeal or www.svp.ie or visit www.translink.co.uk/christmas/ and join in the conversation online using #StuffABusNI. Groups wishing to apply for support from the Appeal must do so by 30 November 2018, while individuals have until 14 December.