'We have also been able to help women and children standing at the border. They are so vulnerable. It is heartbreaking' 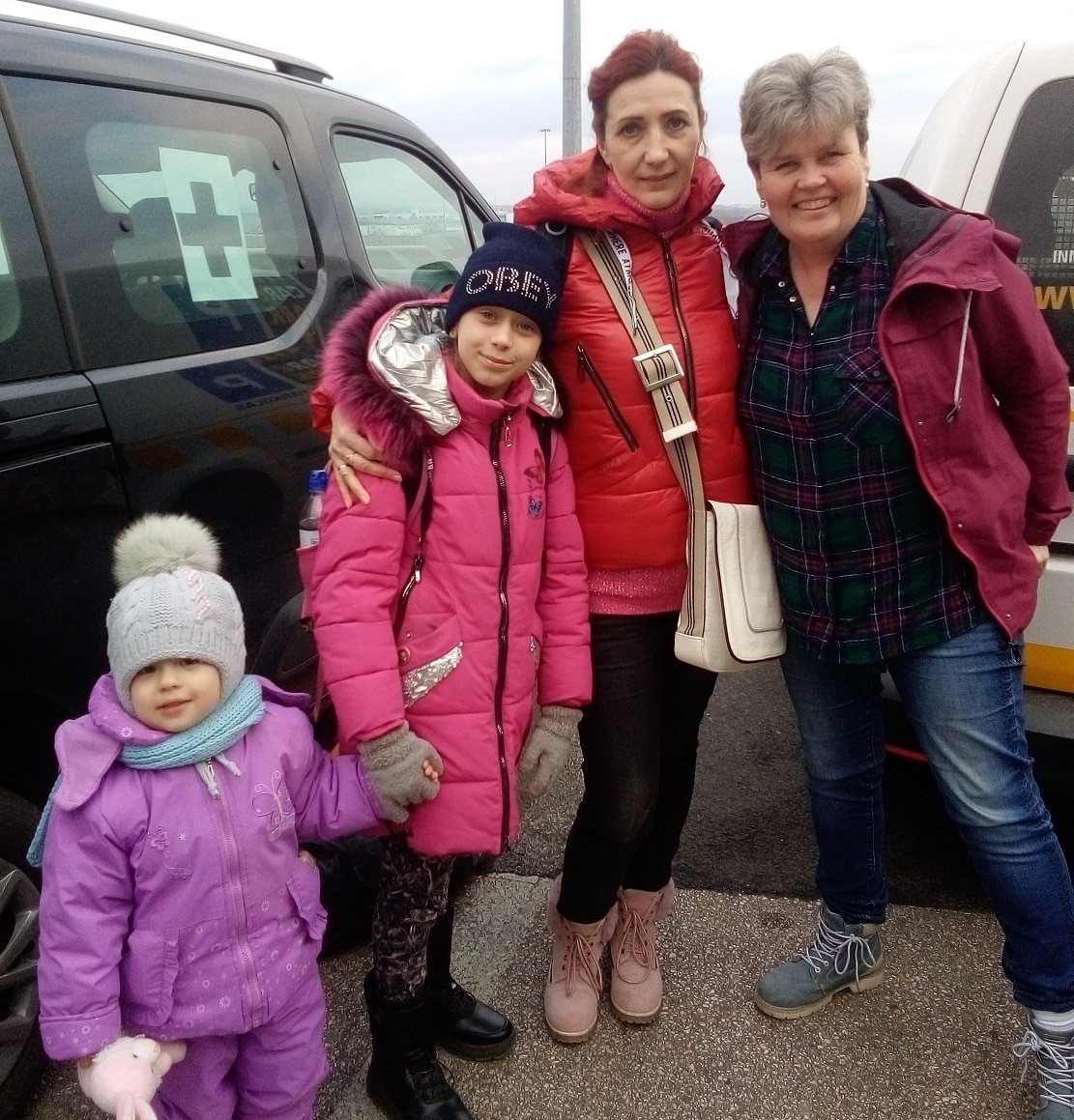 Janet with a family which chose to leave Ukraine. Her husband, an ambulance driver, is still in the country, close to the fighting.

An Armagh woman, who met her husband of 30 years when he was a refugee, has answered a call for help by delivering vital food supplies to neighbouring Ukraine.

Janet Frazer, originally from Drumgaw but now living in Hungary, and husband Daniel have been loading up their seven-seater car and making the three-hour journey to the beleaguered country.

The couple have also been offering a lift to any refugees who want one, as well as opening their home to them.

It’s a case of life coming full circle for Janet, who has five children and a grandchild on the way.

She met her husband when he was living in Austria, having fled Hungary as a refugee, and she was working with a charity. One of Janet’s contacts in Ukraine, transferring food from her van to his

To date, she and Daniel have made seven trips to Ukraine and plan to continue for as long as they have the cash to do so.

And she is hoping that local people here in Armagh and surrounding areas will be able to help them continue their work by making a donation.

Said Janet: “It started when a friend of ours got a request from inside Ukraine to see if anyone could help.

“We just started to bring food and medicine. I have two sisters and a brother and they all began sending me money, so that’s how we’re able to do it.”

The couple are given a specific list of items that are needed – beans, lentils, porridge oats, canned food and other preserved foods – which they buy from a Cash and Carry.

“We meet our friends in the Ukraine and they get it onto their bigger lorry and bring it up to where the fighting is,” she said.

“Coming back, we have also been able to help women and children standing at the border. They are so vulnerable. It is heartbreaking.

“I indicate to them with my thumb that there is space in the car and to meet me over the border.

“Some want to go to Budapest, some will have friends somewhere and we leave them there, some of them stay a couple of nights with us while they get sorted out. A lot of people go to Germany and some on to Poland.

“We have made some really good friends. They are just normal families and they are so grateful. A lot still have family back in Kyiv – one woman’s husband, a firefighter, stayed, as did another who was an ambulance driver.

“There are lots of people here in Hungary trying to help in whatever way they can.”

To date, Janet has been relying mainly on cash donations from her family here and in Scotland. Her brother Mark, who owns an electrical shop in Armagh, and sister Lorraine are still living in Co Armagh as is her dad who is a retired farmer while nephew Stuart Black is a local dentist.

Anyone who can help by donating money should email janetinvalko@gmail.com.