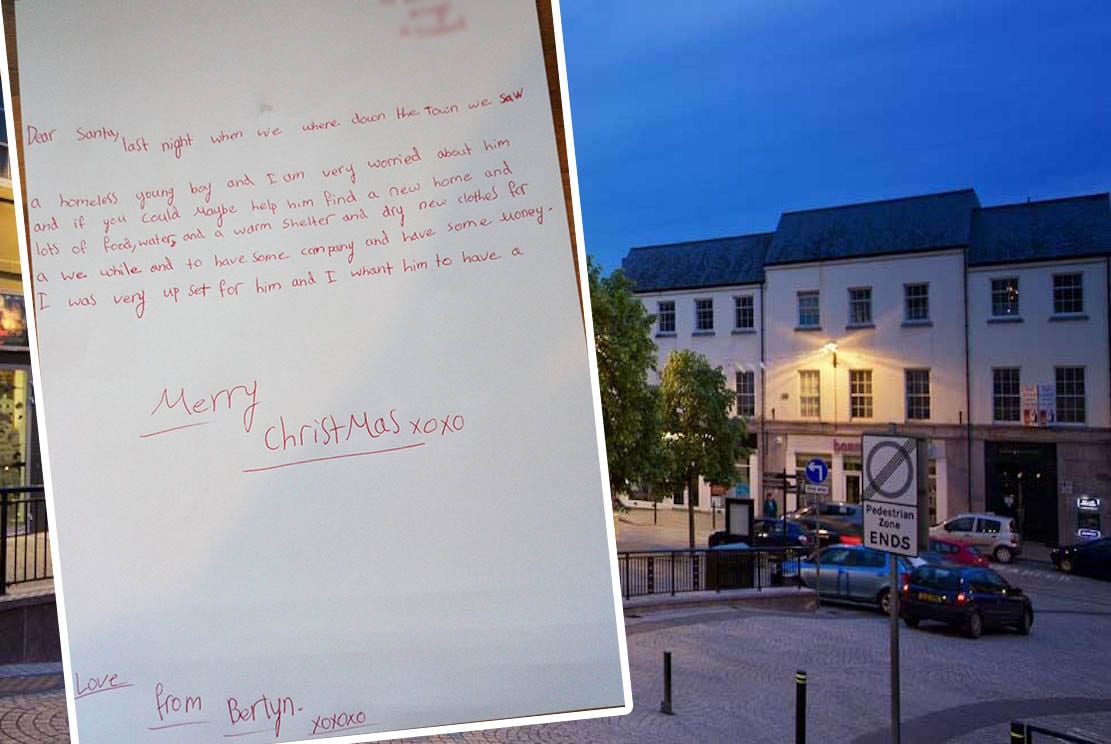 A young Armagh girl has penned a heartbreaking letter to Santa after witnessing what she described as a “young boy” sitting homeless in the city centre on Saturday night.

Ten-year-old Berlyn Woods was in the city with her mum when she witnessed the teenager sitting slumped in the cold and wet conditions– seemingly with very little hope.

That imagery came as a surprise to Berlyn, and it made an impact with her immediately, so much so she packed a rucksack of goods to give to him the next time she saw she could help.

Together with her own input, and the help of Santa, little Berlyn is hoping to make this anonymous boy’s life a little better.

The selfless letter was written in the hope of finding a new home for the young man, some food, water, dry clothes and some company.

The letter read: “Dear Santa, last night when we were down the town we saw a homeless young boy and I am very worried about him and if you could maybe help him find a new home and lots of food, water and a warm shelter and dry new clothes for a wee while and to have some company and have some money. I was very upset for him and I want him to have a merry Christmas xoxox. Love from Berlyn.”

Berlyn’s mum Julie took to social media in a bid to help track down the young man in question and offer him some help.

She posted an image of the letter from her daughter, and asked for help in locating the “young guy in black trousers and black jacket late teens early twenties, was sitting outside Sainsbury’s last night”.

Speaking to Armagh I, Julie explained: “The young man was sitting on the ground outside Sainsbury’s yesterday evening [Saturday] at 6pm.

“He was in his late teens and was drenched and freezing. We bought him some food and some bits to help keep him warm and my 10-year-old daughter gave him her pocket money.”

Julie added: “She’s been breaking her wee heart over him since and eventually sobbed herself to sleep at 4am after packing a rucksack with stuff to bring to him.

“She would really love to find him and invite him to our home for some food and warmth until we can help sort him with some help via a homeless charity.

“We looked this morning for him but unfortunately haven’t had any luck locating him as yet but we are going back out this evening in the hope of finding him.”

Julie is hoping for the public’s help in tracing down the young man.

“It’s gut-wrenching to think of him out there alone in the cold especially coming up to Christmas,” Julie added.

“We all panic over the silly things for Christmas but seeing him really brought home just how lucky we are, especially for my daughter who now realises the true meaning of Christmas, that is sharing what you have to help others.”