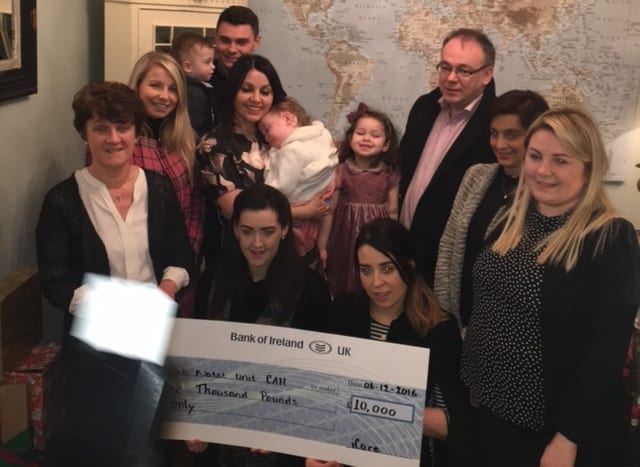 Armagh based charity iCare welcomed representatives from the Craigavon Area Hospital Neonatal Unit to Santa’s Gatelodge this week to present a cheque for £10,000 following a dedicated fundraising campaign.

A celebratory afternoon tea was hosted by iCare in its Milford Gatelodge Headquarters – which was decked out in all its festive glory for the charity’s annual Santa’s Gatelodge Christmas extravaganza. Representatives from the Neonatal Unit including Dr. Martina Hogan and Dr. Sarah Shahid attended the celebration to accept the donation.

Speaking about the fundraising efforts, iCare Committee founding member and CEO of Homecare Independent Living Mairead Mackle said: “At the beginning of the year, the iCare committee set an ambitious target. In addition to granting 14 of our own iCare Wishes across the country we launched a £10,000 fundraising campaign for the Craigavon Neonatal Unit. We chose the Unit because many of us here today have had a personal experience with the fantastic team of nurses, doctors and staff in Craigavon Area hospital.

“We took part in and held a series of events throughout the year including entering a HCIL relay team into Belfast City Marathon, hosting our first ever Purple run 3, 5 and 10k event and collecting donations from HCIL staff for non-uniform days. We also received very generous donations from Armagh City Ladies FC and Enlighten Hope.”

She added: “The cheque presentation would not be possible without the continued dedication, commitment and efforts of the iCare committee, the staff at HCIL, our entire volunteer team and local groups, clubs and businesses who continue to support our charity. I’d like to sincerely thank everyone who has played a part in this campaign.”

Speaking at the presentation, Dr. Martina Hogan said: “We are thrilled to accept this significant donation from iCare today. The fundraising efforts will make a real difference to the lives of the babies and families that will need the Neonatal unit now and in the future. On behalf of Craigavon area hospital and the Neonatal unit, I would like to sincerely thank iCare.”

Founded in 2010, iCare is a registered charity based in the Gatelodge in Milford, led entirely by volunteers. 100% of all proceeds raised goes straight to the charity; there are no associated administrative costs. Through its fundraising efforts, the charity grants iCare Wishes throughout the year. If you would like to learn more about the iCare Wishes Initiative or to see examples of other Wishes that have been granted, please visit www.icare-charity.com