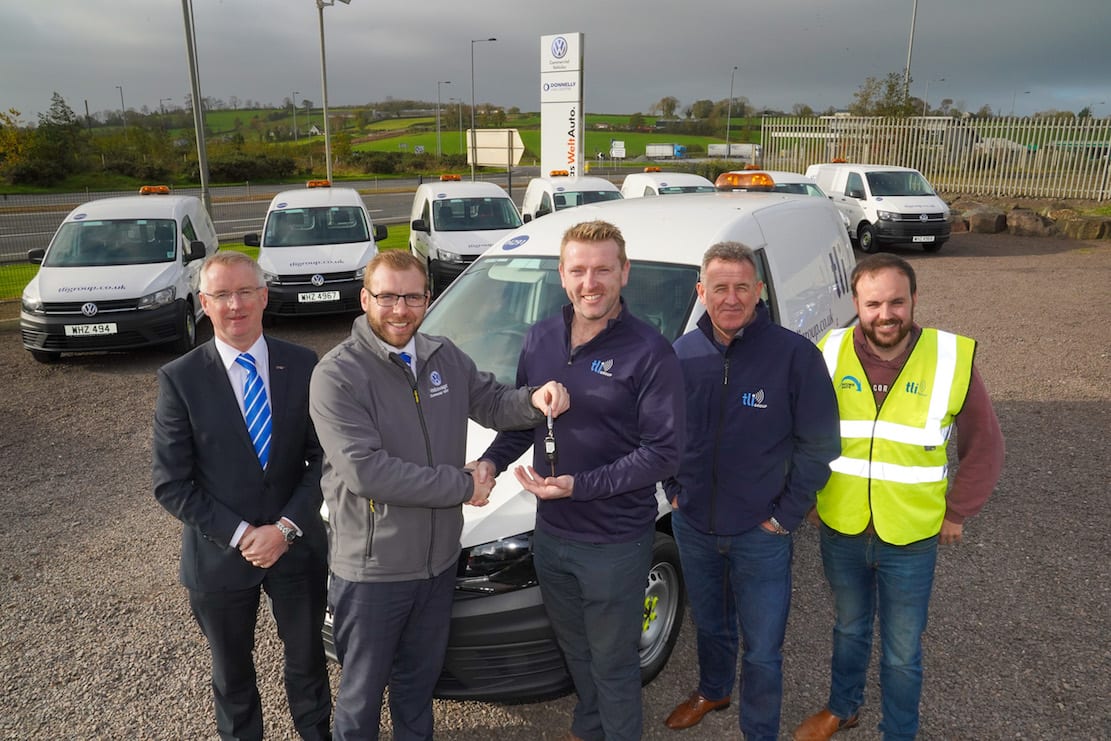 Donnelly Group, Northern Ireland’s largest family-owned new and used vehicle retailer, has partnered with TLI Group to provide a fleet of vehicles to reinforce the company’s position in the Northern Ireland market.

The TLI Group, which provides highly specialised engineering and consultancy services to the overhead line, substation, solar and wind farm industries, has offices in Tralee and Hampshire and will now be operating in Northern Ireland following the win of a seven year Northern Ireland Electricity Networks (NIE Networks) contract.

Donnelly Group has provided an initial fleet of eight vehicles which will enable the company’s 50 staff in Northern Ireland to carry out build and maintenance work at various locations across the province.

Mike Murphy, Contracts Manager at TLI Group said: “Having worked with NIE Networks over the past three years, we were very familiar with its requirements and were delighted to be awarded this seven year major refurbishment contract.

“NIE Networks transports power to more than 870,000 customers and with 300 major substations as well as 2,200km of transmission network and 47,000km of distribution network, it really does reach every corner of the province.

“This means that mobility is crucial for our staff, particularly the response teams.

“Donnelly Group, through its Volkswagen Van Centre, offered us competitive rates across a vast range of vehicles. Our initial fleet consists of eight Volkswagen vehicles – seven Caddy vans and one Transporter. These were the vehicles that best suited our needs and we’re confident our fleet will expand as we develop and grow our business in Northern Ireland.

“With a new operating base in Tamnamore, we are not far from Donnelly Headquarters in Dungannon which is extremely reassuring knowing assistance is close and available should it be required.

“At TLI, we have plans to grow our workforce to approximately 150 people in Northern Ireland and look forward to continuing our strategic alliance with Donnelly Group.”

With approximately 400 employees across the UK and Ireland, TLI Group counts SSE and UK Power Networks amongst its clients in addition to NIE Networks.

Chris Donnelly, Business Development Manager at Donnelly Volkswagen Van Centre, said: “At Donnelly Group, our priority is matching customers with vehicles or a fleet that caters to their needs and budget.

“For a company such as TLI Group which has employees out on the road all day every day, the reliability, performance and efficiency of its fleet is crucial.

“The Caddy van is functional, comfortable and versatile whilst providing plenty of storage allowing workers to transport cargo from A to B whilst the more spacious Transporter will allow for the movement of larger items. These are superb vehicles and a great choice by TLI Group.

“Initially TLI Group will launch an operating base in Tamnamore but with satellite offices across Northern Ireland, Donnelly Group’s province-wide presence is particularly reassuring for the team. With nine locations across Northern Ireland, customers really never are far from a Donnelly Group showroom which means we can respond very quickly and get a replacement vehicle on the road should it be required.

“We’re really happy TLI Group selected Donnelly Group as its fleet partner and we look forward to supporting the company as it looks to further growth in Northern Ireland.”

For more information about the choice of vehicles available at the Donnelly Volkswagen Van Centre, please visit www.donnellygroup.co.uk or contact 02887238026.