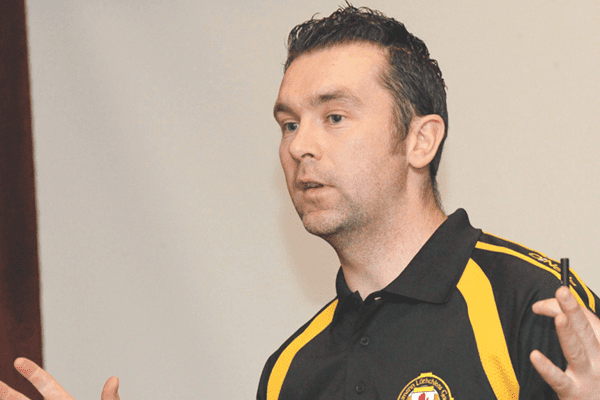 Former Armagh All-Ireland winner Oisin McConville will be showing another side to his many talents when he lines up for the forthcoming series of Celebrity MasterChef Ireland.

The 41-year-old – who retired from inter-county football in 2008, six years after helping the Orchard County bring Sam Maguire to Armagh – is one of 10 contestants to feature in the second series.

The two-time All-Star Award winner handed over his Crossmaglen bainisteoir bib last March and will now don his apron instead as the competition hots up in the kitchen.

McConville reckons he is an “okay cook” but once his competitive streak comes out he “focuses 100%!”

The second series of Celebrity MasterChef Ireland will return with two brand new judges and a brand new home on TV3. This eight-part series will broadcast every Monday on TV3 at 10pm from January 16 until March 6.

With the new series come two new judges with exciting pedigrees to the MasterChef kitchen. Two Michelin star chef, Daniel Clifford is one of Britain’s most celebrated chefs, and Dublin-born Robin Gill is one London’s most respected chefs and restaurateurs.

Braving the heat of the kitchen alongside Oisin will be nine other celebrity cooks.

Sonia O’Sullivan (46) one of the country’s most successful athletes, is a passionate cook and cooks for her family every day.

Singer and actress Samantha Mumba (33) is another passionate cook who likes to cook everything from scratch.

Much loved RTÉ weather forecaster Evelyn Cusack (51) is up for the challenge although is little bit daunted at the prospect!

Model Holly Carpenter (24) is competitive and as a fan of MasterChef would like to win the show, time will tell if she can handle the pressure!

Eurovision winner and singer Niamh Kavanagh (46) loves to cook for family and friends. She has watched EVERY episode of MasterChef. Will this give her the edge that she needs to win?

Model and TV personality Nadia Forde (27) has been living in Japan and has picked up some new ways of cooking dishes. Can she use these new skills to win?

Director of Amnesty Ireland Colm O’Gorman (50) has been cooking since he was a child. He learned most of his skills from cooking with his mother and says feeding people makes him happy. Can his make our judges happy with his culinary skills?

As the main cook in his house, ‘Saturday AM’ presenter and actor Simon Delaney (45) certainly has the practice! He wanted to take part in the first series of Celebrity MasterChef but his schedule wouldn’t allow it. Now is his chance to go all the way to the final!

Singer songwriter Mundy (41) is ready to test himself in the kitchen instead of the stage, he is self-taught in the kitchen and a MasterChef fanatic.

Over eight weeks the celebrity cooks will be put through their paces in the kitchen; they will be learning from two of the most creative and aspirational chefs in the business. But there is no easy ride in MasterChef, as judges Daniel and Robin are looking for outstanding cooking skills and, if the celebrities are not up to scratch, they will be eliminated.

Tune in to ‘Celebrity MasterChef Ireland’ every Monday at 10pm on TV3, from 16th January, 2017 with catch up on 3player