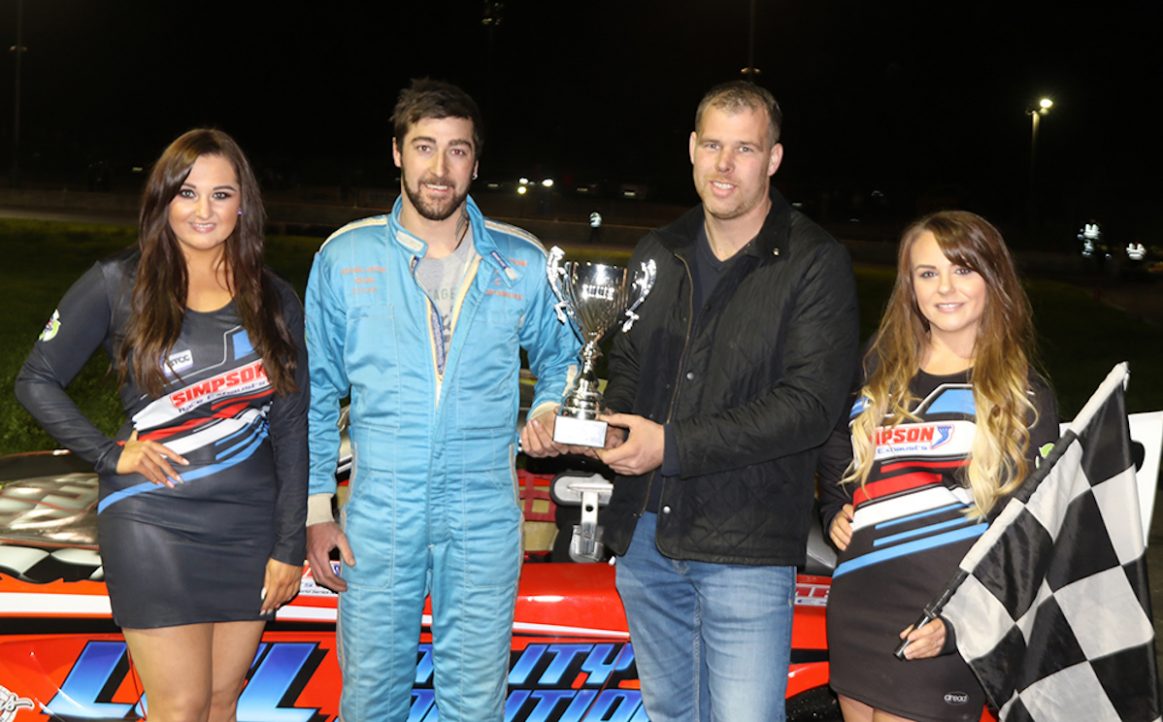 Donegal based driver Terence McConalogue pulled off a faultless hat-trick when the National Hot Rods contested Round 2 of the Simpson Race Exhausts World Series NI at Tullyroan Oval on Saturday evening.

Round 2 of the Simpson Race Exhausts World Series NI saw recent newcomer Terence McConalogue take his rightful place at the front of the grid for the first time. He quickly settled down to a great pace which the other more experienced men just couldn’t match. Terence took the first heat easily from Podge McQuaid and Andrew Stewart, before leading home former World Champion Adam Maxwell and Jaimie McCurdy in heat two.

If anyone thought the extra distance in the final might allow the star men to get on terms they were to be mistaken. Terence quickly got the head down and reeled off the laps well clear of the ensuing pack. Podge McQuaid held on for second despite the close attentions of Jaimie McCurdy nearing the end , with Keith Martin and Shane Murray next home.

For the Lightning Rods it was the Grand Final night of their A Percy Auto Body Repairs Challenge Series, with Adam McCann relieving Ronan McNally of the lead in the opening heat to take a fine win over James McKinney, who fought a rearguard battle against Richard Stewart over the closing laps. There was a huge battle in the pack in heat two, which saw McCann again take the win to earn himself a rise in gradings for the next meeting. 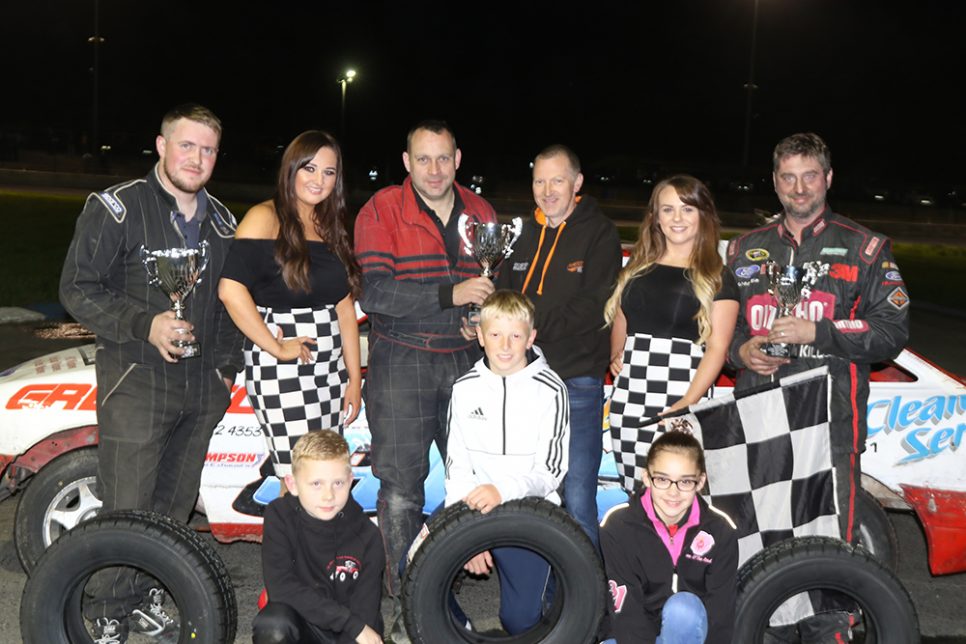 On aggregate series points Nigel Jackson earned pole position for the Grand Final of the A Percy Auto Body Repairs Challenge Series, and he quickly assumed the lead ahead of Tim Hazlett. Tim pressurised Jackson all the way but couldn’t unseat the leader, Nigel coming home to take the series win over Hazlett, with Martin O’Donovan grabbing third after Mark Corry and Ricky Shaw tripped over each other within sight of the flag. The top three all received race tyres courtesy of the series sponsors.

An excellent entry of 19 Superstox contested the second round of the NIOvalTV Series, with an action packed opener falling to yellow grader Paddy Murphy who just held off Lee Davison and Jordan Robinson. Heat two was another thriller too with yet more caution periods for stranded cars. Kyle Beattie worked his way past to the front in this one, taking the flag ahead of Davison and Sean Mark. 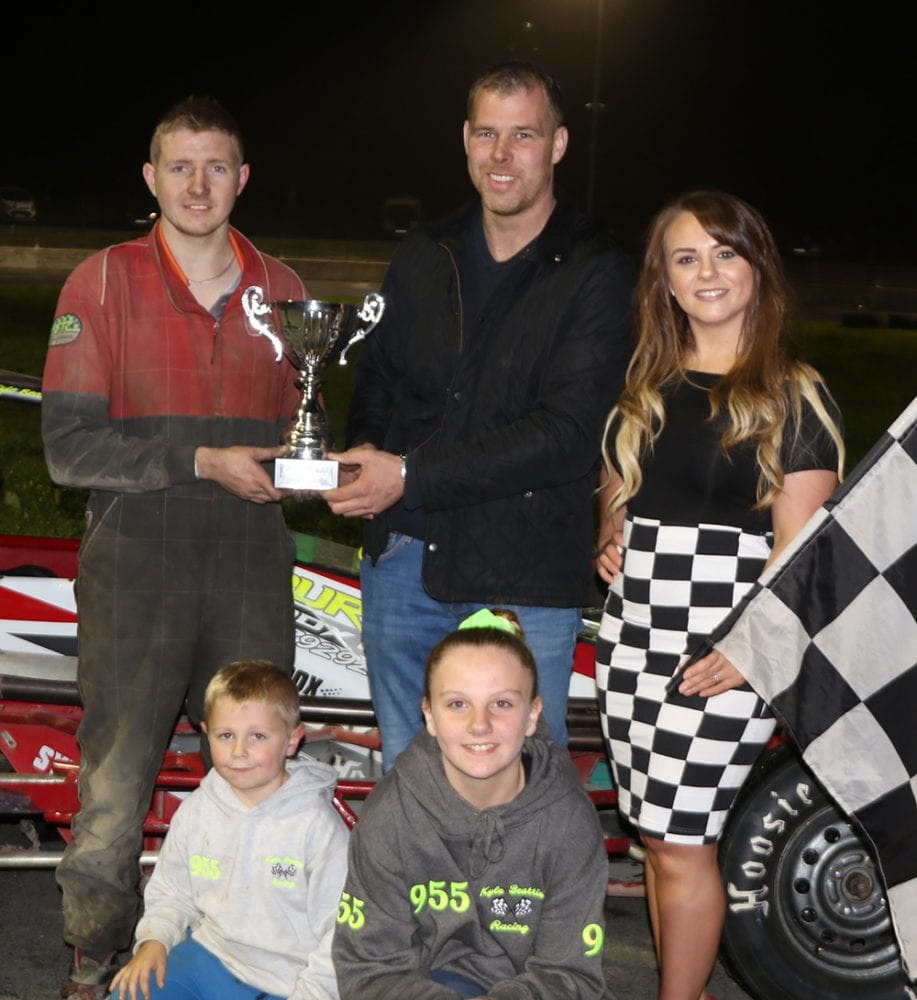 Darren Bevan led the opening exchanges of the final, before Keith McAreavey showed a turn of pace to power ahead. He quickly had Beattie and Davison in his mirrors as the laps dwindled down, with Kyle moving ahead to complete his double ahead of Davison, McAreavey and Robinson.

A pleasing entry of Rookie Bangers thrilled the fans all evening with their entertaining racing. Josh Goligher led the opener ahead of Peter McConnell, with McConnell actually spinning Josh across the line as he attempted to snatch the win, but Josh just held on. Philip Farrell was the one to watch in heat two as he avoided the carnage to take the flag over McConnell and Goligher.

There was a huge hit early on for David Gurney in the final which brought about a stoppage. After two runner up slots in the heats, McConnell put things right by taking victory in the feature race ahead of Farrell and Paul O’Connor, the latter inheriting third after Christy Bradley unfortunately failed the post race technical checks.

The ProStocks completed the meeting, with the heats falling to Sam Stewart and Dan Shannon, before British Champion Shannon doubled up with victory in the feature race ahead of Stewart and David Browne.

The next meeting at Tullyroan Oval is our annual Speedweekend on September 21st /22nd , featuring British Championships for both National Hot Rods and Superstox, the Irish Open Championship for Classic Hot Rods plus a full support programme. Racing commences on Saturday at 4.30pm and on Sunday at 1pm.