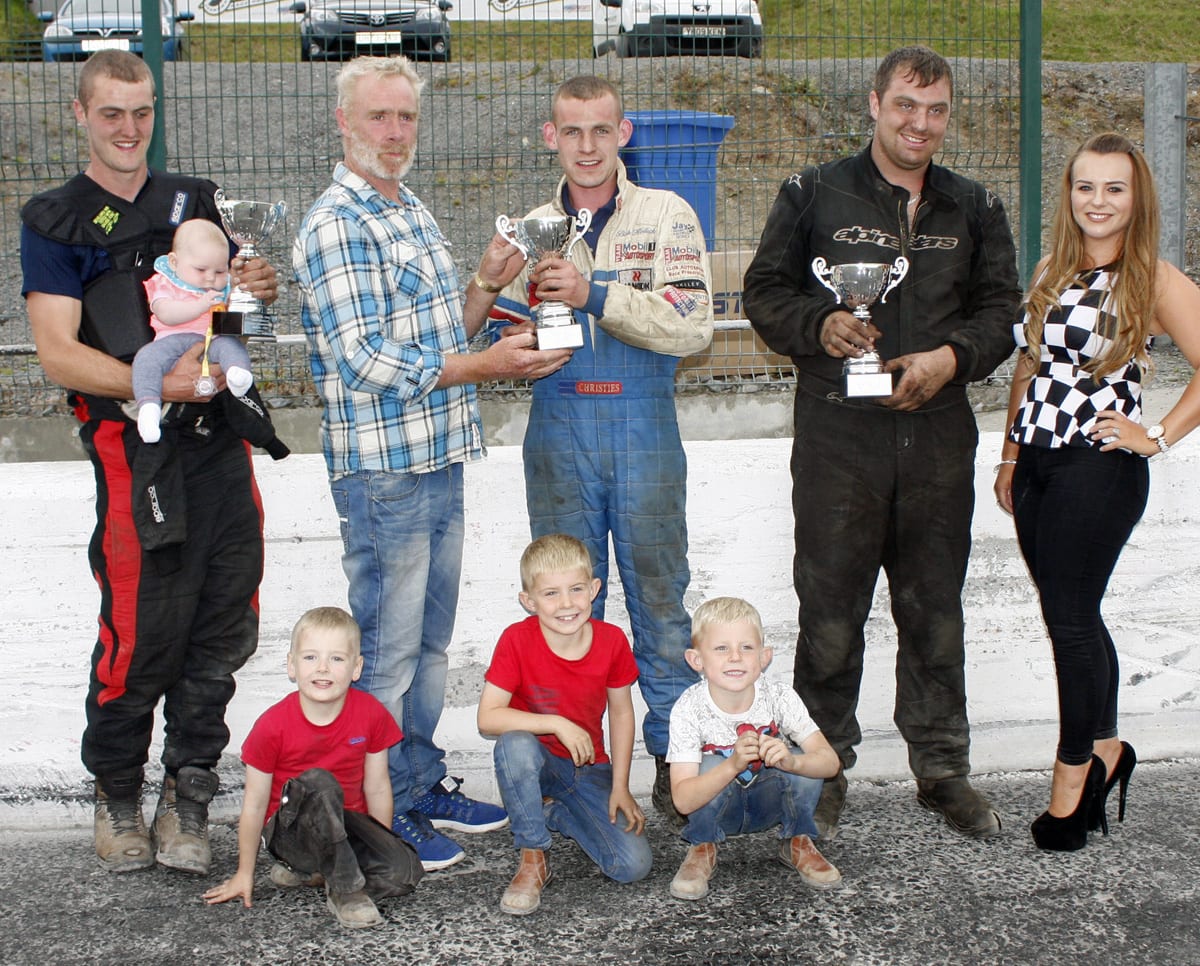 There were thrills and spills aplenty at Tullyroan Oval on Sunday afternoon as the Micro Bangers contested their annual Teams Championship.

The Micro Bangers started quite literally with a bang, with Ian Crowley taking a huge hit on the Tullyroan Bend from which he thankfully escaped unscathed. Karl Smyth emerged from the chaos to take the win for Bad Company, with him team mates filling out all of the top five places.

Heat two also saw an early stoppage, with Leonard Dunn having a huge rollover into turn one. From the restart National Hot Rod star Adam Maxwell surged clear to take the win over William McFaul and Steven Bolton.

The final saw yet more action all around the circuit with Boyd storming through to the victory to seal the Teams Championship for Bad Company A. Maxwell and Boyd rounded out the podium, before Smyth went on to win an entertaining Destruction Derby in which the Bad Company boys turned on each other to entertain the fans. Dunn, McFaul and Boyd celebrated with the Teams Championship trophy with Bad Company A now the undisputed kings of the local Banger scene.

The Lightning Rods were contesting the second round of their 2ke Engineering Challenge Series, with Adam McCann sealing victory in both heats from the white grade. In the opener he just held off Mark Corry at the line, before narrowly beating Scott Cochrane across the stripe in heat two.

Aggregate points from the heats saw McCann and Corry share the front row. Corry immediately hit the front, with Rochford quickly attacking from behind. Rochford then spent numerous laps on the outside in what was a superb dice, before swooping ahead into the lead to take a very impressive win which had the fans applauding around the stadium. Corry and Mark McCambridge completed the top three, the latter in a new car after his recent big crash.

Making a rare Tullyroan appearance were the Thunder Rods, and Londonderry driver Davy Gurney led the opening heat despite heavy pressure from James Goldie. Goldie then clashed with Lee McCloy, which allowed Gurney to break free and take a clear win over McCloy and Joshua McMullan. McCloy took a great win in heat two after an intriguing race as he and Goldie circulated side by side for many laps. McCloy got the verdict at the line, with Goldie and David Baird next up.

McCloy quickly went ahead in the Tullyroan Challenge Cup final, with Andrew McLean gamely trying to stick to his tail over the opening laps. McCloy edged clear and on to an impressive win, with Goldie nipping past McLean late on to snatch second.

It was Round 2 of the 2ke Engineering Young Guns Series for the Junior Productions, with Adam Weir debuting a superb new Vauxhall Corsa C. Aaron Ward led Callum Magill for much of the opening heat, before Magill found a gap on the final lap. The duo raced to the line side by side, with Magill getting the verdict by the slimmest of margins. They both set the pace in the second heat too, before Graham Meek swooped past to take the flag. He was adjudged to have jumped the start though, and was demoted to third place which handed Magill his second win of the day with Ward second once again.

The closed grid final was always going to bring the star men into play, with Meek the early leader until a caution for Ward hard in the wall on turn one. Thankfully there was no serious injury to Aaron, and at the resumption there was some very untidy driving throughout the field. Through the drama Weir emerged ahead to christen his new machine with a fine win, with Meek and Drew McKeown filling out the top three.

Leyton Hughes and Lexi Crooks disputed the lead in the opening Ninja Karts race, until a caution period saw their advantage wiped out. That allowed Max Hobson to get a run on them at the restart, Max taking the win after an impressive drive from the back of the grid. Heat two saw Hughes out front, with Hobson again bearing down fast. The two ran side by side to the chequered flag, with Hughes just getting the verdict by inches at the line for a great win.

In the final Hughes again led Crooks, with a similar story to before as Hobson was closing them down fast once he had worked his way past the others. Lexi managed to slip under Leyton to take up the running and she held out on front to take a fabulous win over Hobson, with Hughes ending up in third.