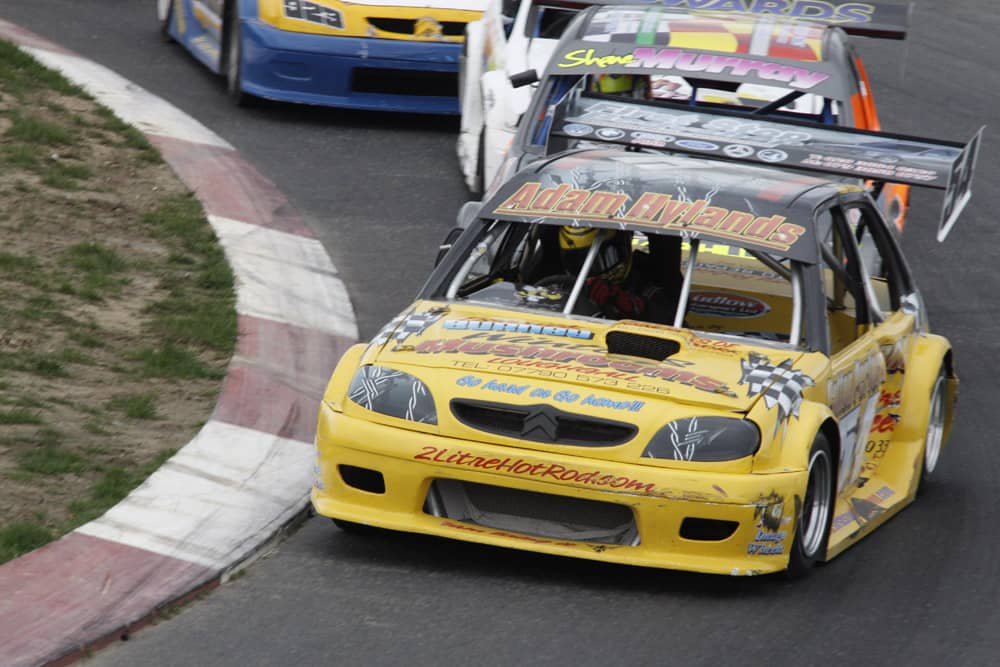 IT was round one of the Wash ‘n’ Dash Challenge Series for the 2.0 Hot Rods at Tullyroan Oval on Sunday, and the racing  was full of drama and excitement from the off. The final saw Adam Hylands, Shane Murray, Wayne Woolsey, Stephen Emerson and Adam Heatrick fighting tooth and nail at the front, with literally inches between all the cars for the majority of the race. Hylands was having to absorb massive pressure from those behind in an enthralling encounter, which only eased when Murray and Woolsey clashed on the back straight. This gave Hyland the breathing space he needed to sweep home to victory ahead of Emerson and Murray.

In the earlier heats, Woolsey had taken the flag in both but following an indiscretion after the final he was removed from all the afternoon’s results. That handed the heat one victory to Hylands, with Davy Potter taking the second race of the day.

The new Superstox class at Tullyroan Oval is proving to be a real hit, and Aughnacloy’s Kyle Beattie underlined his star quality by going through the racecard unbeaten during Sunday’s Greer’s of Antrim Volvo sponsored meeting.

The field of the open wheelers made double figures for the first time as the formula grows in popularity, boosted by the visit of Scottish superstar Tony Lattka. Beattie wasted little time in moving ahead in heat one, coming home to the flag well clear of Gary Grattan and Lattka. Kyle’s brother Nathan set the pace in the second race of the day in his ex-Shaun Brooker car, but had to give way to his older brother as Kyle swept home to his second victory of the day, this time ahead of Denver Grattan and Gary Grattan.

The two heat wins saw Beattie upgraded to the star grade for the final, but any thoughts the Grattan’s and Lattka had of overturning his form proved to be unfounded. Kyle breezed away from the rest of the stars at the off, and eased past pacesetter Rab Stewart with five laps to run to land a very emphatic hat-trick indeed. Stewart held on for second ahead of Denver Grattan, Gary Grattan and welcome visitor LattkaJunior Productions

Antrim ace Dean McCrory was a double victor in the Junior Productions, taking victory in heat two as well as the final which doubled up as the opening round of the Murrays of Randalstown Young Guns Series. It could have been the day’s second triple success, but Dean was demoted from the win in the opening heat for a jump start which handed the flag to Bradley McKinstry.

Shane McMillan had the final under control as he led for the majority of the proceedings, although McCrory was all over him like a rash. McMillan was able to cover off his every advance though, until Dean got a run down his inside with less than 5 to go, before going on to take the chequered flag. Dan Campbell came through for the runner up slot ahead of Jaimie McCurdy, after McKinstry was docked to fourth for contact.

The Lightning Rods again produced some frantic action in their big Sierra’s, with action aplenty and also their fair share of penalties too! The opening heat saw a welcome return to victory lane for Brendan McConnell, as the reigning ORCi Champion made a late charge for the flag ahead of Irish Champion Jordan Rochford and Nigel Jackson. Coleraine’s Dane Ferry was the victor in heat two, racing home ahead of Jackson and Martin O’Flaherty this time.

The Greer’s of Antrim final was fraught stuff to say the least, with a number of incidents all around the track. O’Flaherty didn’t let it distract him though, as he pulled clear at the front into a lead he would never lose. Ferry just couldn’t get on terms with the Ardglass man though, and he sportingly settled for second ahead of a very sharp looking Winston Weir in third.

European Champion Chris ‘Gunner’ Lattka from Scotland and Republic of Ireland star Colm O’Sullivan boosted the Stock Rods grid, and they went on to serve up three fantastic races. Jonny McMillan used his yellow grading to good effect with a flag to flag win in the first heat, but he was made to work much harder in the second event of the day. He was controversially removed from the lead by the following pack with just three laps to go, and Race Control then awarded him the win under the Malcolm Girling rule which saw the race declared at the three laps to go stage.

The final had everything from start to finish, and through it all Ballymena driver Micky McFall found himself  holding the baby ahead of Lattka. Micky used all his experience to bring his Nova home to the flag for a fine win, with Gunner upholding Scottish honour in second and Raymond Harper in third. The huge crowd were there to see the popular Caravan Destruction Derby, which saw those menaces of the road smashed to pieces in a real fun event. It was Birches driver Willy Ogilby who took the spoils as the last one moving with a caravan, or trailer really, still attached. Lee Johnston run him close, but Ogilby pulled off an excellent move to rip Johnston’s caravan off his car and put him out of the running.

The action continues at Tullyroan Oval next Saturday evening at 6.30pm, when the elite National Hot Rods return for another World Championship qualifier. 2.0 Hot Rods, ProStocks, Ninja Karts and Lightning Rods are also in action as well as a ProStocks ladies race.