Firsts have week off before tough trip to Nenagh Ormond 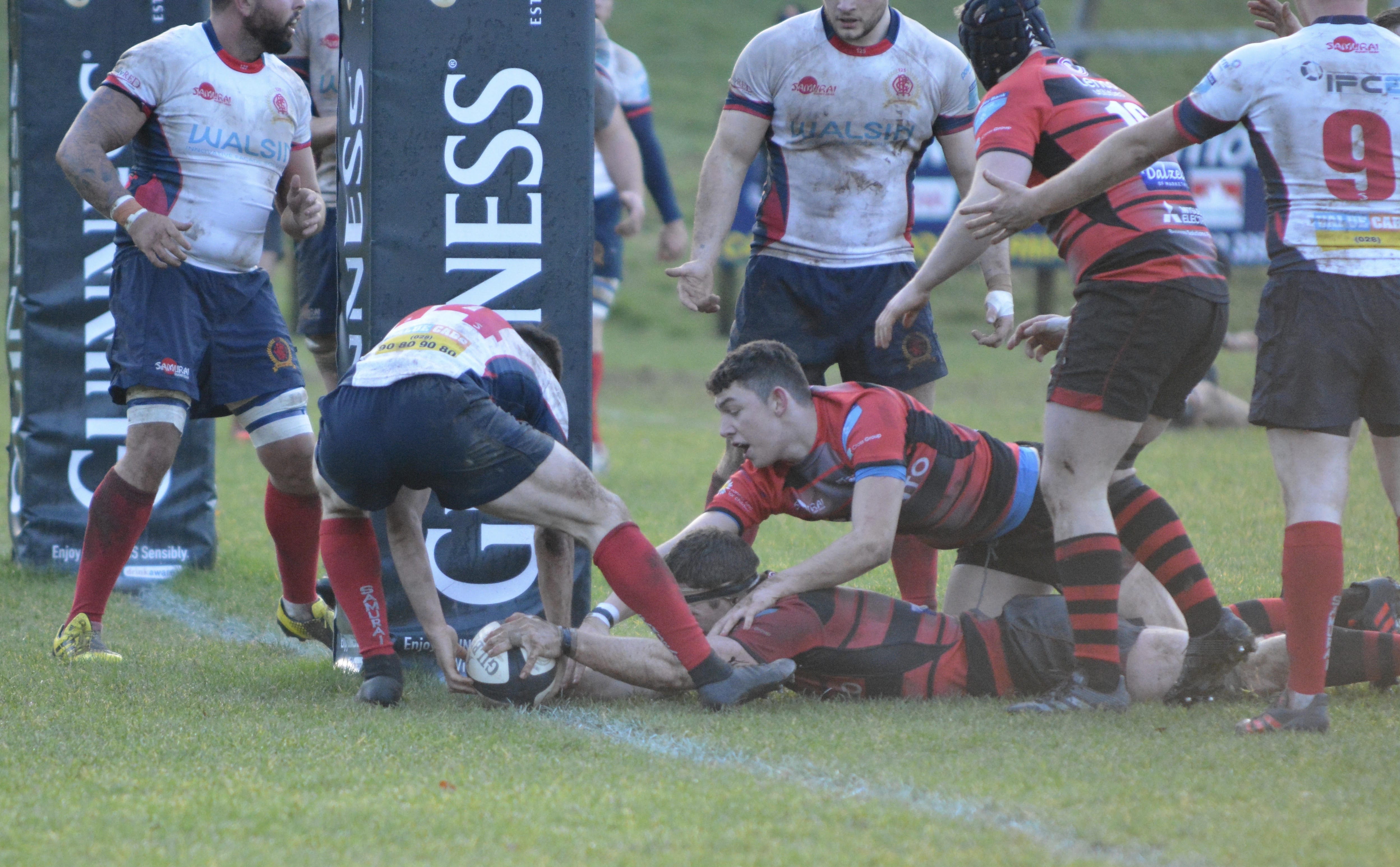 Robbie Whitten scores for Armagh against Malone on Saturday.

Malone were the visitors to the Palace Grounds on Saturday and the current leaders in Division 2A cemented their top of the table position with a clinical bonus point win against hosts City of Armagh.

The Belfast side received the kick off and immediately took the game to Armagh and were rewarded with the first try of the match, with only five minutes on the clock. Centre Nathan Brown squeezed in at the left corner and Rory Campbell converted for a 7 nil lead.

Two minutes later Campbell converted a penalty and Malone were 10 nil ahead. Armagh responded with their first foray into Malone territory and on 17 minutes Cormac Fox converted a penalty to get the home side off the mark. With heavy rain now falling, Malone returned to the attack and pinned Armagh back in their 22.

The visitors were awarded a 5 metre scrum and as they drove for the line, the referee awarded a penalty try to stretch Malone’s lead to 3-17.

Armagh then gifted Malone their third try on 25 minutes. A loose ball was not secured outside the Malone 22 and winger Campbell fly-hacked it down the pitch. The Armagh defence was in disarray and Malone recycled to send full-back, Jack Owens over the tryline for Campbell to convert and Malone were running away with the match at 3-24.

Armagh needed to respond and they showed some urgency, taking a tap penalty to bring play into the Malone 22. Winger Ryan Purvis was forced into touch in the corner as he went for the line in Armagh’s best attack of the match. Malone misfired at the lineout and flanker Stuart Hooks crossed for an Armagh try. The conversion was missed leaving the score 8-24.

As halftime approached it was Malone who looked likely to score next and their forwards were held up over the Armagh resulting in another 5 metre scrum. A penalty to the home side relieved the pressure and the halftime whistle went with Malone deservedly ahead, 8-24.

There were harsh words from the Armagh coaching team at the break and the home team started the second half with more determination and vigour. Winger Andrew Willis made his return after 3 months out with injury and prop Paul Mullen added fresh legs. Malone conceded a penalty on 43 minutes and Fox converted the kick to make the score 11-24.

A knock on by Malone broke up another attack from the visitors and Armagh counter-attacked with a strong run by Willis. The final pass went astray and Malone cleared the danger. In Armagh’s best spell of the game they put the visitors under pressure and should have scored their second try when a loose ball 2 metres from the Malone line was knocked on by the attacker.

In the wet conditions, Armagh’s handling let them down with a number of knock-ons in Malone’s 22 turning over vital possession. Armagh pushed hard to break down the well-organised Malone defence but another error gifted Malone their bonus point try. An over-ambitious pass in the Malone 22 was picked off by Jack Owens and the full back raced 80 metres for his second try of the day. Campbell’s conversion gave Malone a handsome 11-31 lead and the Belfast side were home and dry when Campbell kicked a penalty on 64 minutes, 11-34.

The Armagh side never gave up but their efforts in the final quarter continued to be thwarted by handling errors and Malone looked threatening when in possession. On 70 minutes Armagh broke out of defence and Malone slowed down the ball with winger, Bryans sent to the sin bin. The home team brought play up to the Malone 22 and good forward driving was rewarded with a try under the posts for flanker Robert Whitten. Purvis converted to make the score 18-34. Malone then stole possession from the restart and finished the match camped in Armagh’s 22. Andrew Willis’s comeback ended with a yellow card but Armagh held out and the final whistle went with Malone victorious, 18-34.

The Armagh coaching team were disappointed with their side’s performance on the day. “Malone were the better team over 80 minutes and Armagh’s accuracy was well below par” stated Willie Faloon.

The team now has a week off before a tough trip away to Nenagh Ormond who hold third spot in the league table. A fourth place playoff position however is still very much in the team’s hands with five games remaining.

The Seconds thumped Ballynahinch seconds 31-7 in the second round of the Towns Cup at Ballymacarn Park on Saturday past by playing some scintillating rugby on a fine but cold sunny afternoon.

Winning the toss the side elected to play up the slope and straight from the kickoff got into their rhythm with forwards and backs combining bringing play into home territory. A huge Armagh scrum which drove the Hinch back 15 metres was the catalyst to bring play up to the home line.

After several penetrating drives, James Morton crashed over close to the posts for a try on seven minutes. Harry Boyd stroked over the conversion for an early 7-0 lead. The Armagh backline were in full flow with TC and Boyd sending centres Gimeno and Hooks on their way. Hinch were threatening at times and on twenty minutes they retorted with a converted try to level the game 7-7.

Good ball carrying by McNeice, Finn and Steven Morton had the team deep in the Hinch 22 for Boyd to cleverly show the ball and slip inside for a second try on 25 minutes, 14-7.  Keeping up the intensity, Armagh went through the phases moving the ball right then left for Hooks to ghost through for another try which Boyd excellently converted.

With the score at 21-7 at half time, Armagh kicked off playing down the slope determined to push home their dominance. Hinch however had other ideas and proceeded to attack immediately, retaining the ball for a period of time and forcing the visitors to defend stoutly.

Arron Kennedy came off the bench to make his team debut with Shane McKeever also joining the fray. Most of the play was in the Armagh half however Boyd added 3 points with a converted penalty on 75 minutes after a break on the right towards the club house, 24-7.

Shortly after Gimeno and Karlsen combined on the same side to bring play into the Hinch 22 with James Morton supporting and slipping a pass to Hooks for a good team try. Boyd’s conversion signalled the end of the match for a comprehensive 31-7 win.

It was pleasing to see the defence strong in this game with notable tackles late on from Andrew Morton and Misi Bogitini preventing certain tries.

City of Armagh youth rugby teams were in action over the last two weeks.

The U18s hosted Malone U18s at the Palace Grounds on Saturday 3 February which was a rescheduled league fixture. The Armagh team secured another 3 points winning the game comfortably at 34-5 and remaining unbeaten in competitive rugby.

The U16s remain top of their league as they overcame the challenge from Carrick on Saturday 27 January winning 29-0. The U16s picked up a further 3 points on Saturday 3 February as their opponent Banbridge U16s failed to field and conceded the game.

The U14s suffered a defeat at the hands of Carrick U14 27-22 on Saturday 27 January. The U14s looked to have this game under control going in at half time 17-5 up however some loose play allowed Carrick to score several tries in the second half. Jack Armstrong, Jack Rowntree and Michael Burnett were the scorers on day and remarkably Carrick’s scores all came from 1 player on their team.

The U14s responded well however the following week against a strong Banbridge team defeating them 29-10. When the two teams last met in October they drew 17-17. The game was in the balance going into the second half. Both teams were locked at 5-5 at half time with Lee Nesbitt scoring for Armagh which was a length of the pitch try after Armagh absorbed some early pressure.

With Banbridge scoring first in the second half the U14s showed great determination and produced winning scores through Michael Burnett (3) and Ian Kennedy. Michael Burnett also converted 2 of the 5 tries.

Next week Saturday 10 February all 3 Youth teams travel to Ballyclare for league games. The U16s game is probably the most significant as Armagh U16s are top of league while Ballyclare U16s are in second place.