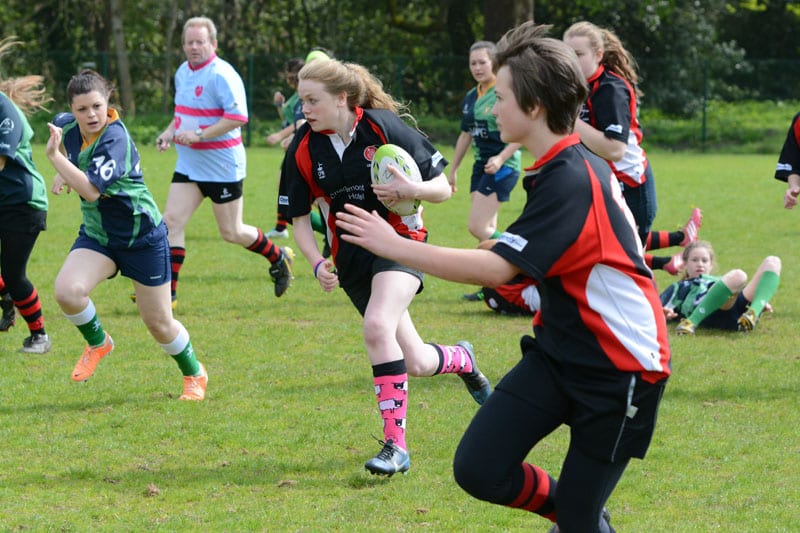 City of Armagh Under 18 Ladies took to their home field on Monday night, against Enniskillen, in their final league fixture.

These were two well matched sides and after 15mins Enniskillen were dominating territory but Armagh were defending well.

Armagh finally broke out from their 22, with fine carries from Lisa Henry and Stacey Fluke. Quick ball to Alanna McKee released Sarah Lennon who passed inside for Vicky Irwin to dot down for a try.

A strong run by Enniskillen’s Alison Glass was halted by a shuddering tackle by Stacey Fluke, but Armagh’s support players were penalised at the breakdown.

A quickly taken tap penalty caught Armagh flat-footed and, when the ball was spun out to the flank, there would be no catching Hollie Bruce who evened the score at 5-5.

In Armagh’s next attack, Katie Crawford was forced from the field by injury and her replacement, Laura Henderson, took a great pass from Gabrielle Fox and outran the Enniskillen cover to score with her first touch. Halftime 10-5.

Armagh started the second half in fine style with Leah McGoldrick breaking through, offloading to Alanna McKee who put Sarah Lennon away for a try. 15-5.

With 15 minutes left, Armagh were visibly tiring and only great cover tackles from Leah McGoldrick and Lisa Henry prevented two Enniskillen Tries. ‘Skins’ were now in the ascendancy and Rebecca Penell burst through for a converted try. 15-12.

Back came Enniskillen again with Abbie Parkinson putting them in front for the first time. 15-19. With the last play of the game, ‘Skin’s’ scrumhalf, Katherine Dane, scored and converted her own try to leave the final score 15-26.

This young Armagh side has an abundance of skill and ability, playing an exciting and enterprising brand of rugby. However, their tendancy to fade in the final quarter of games is costing them dear.

With a three week break before starting their cup campaign at home against Malone on 1st March, the roads around Armagh can expect a pounding!