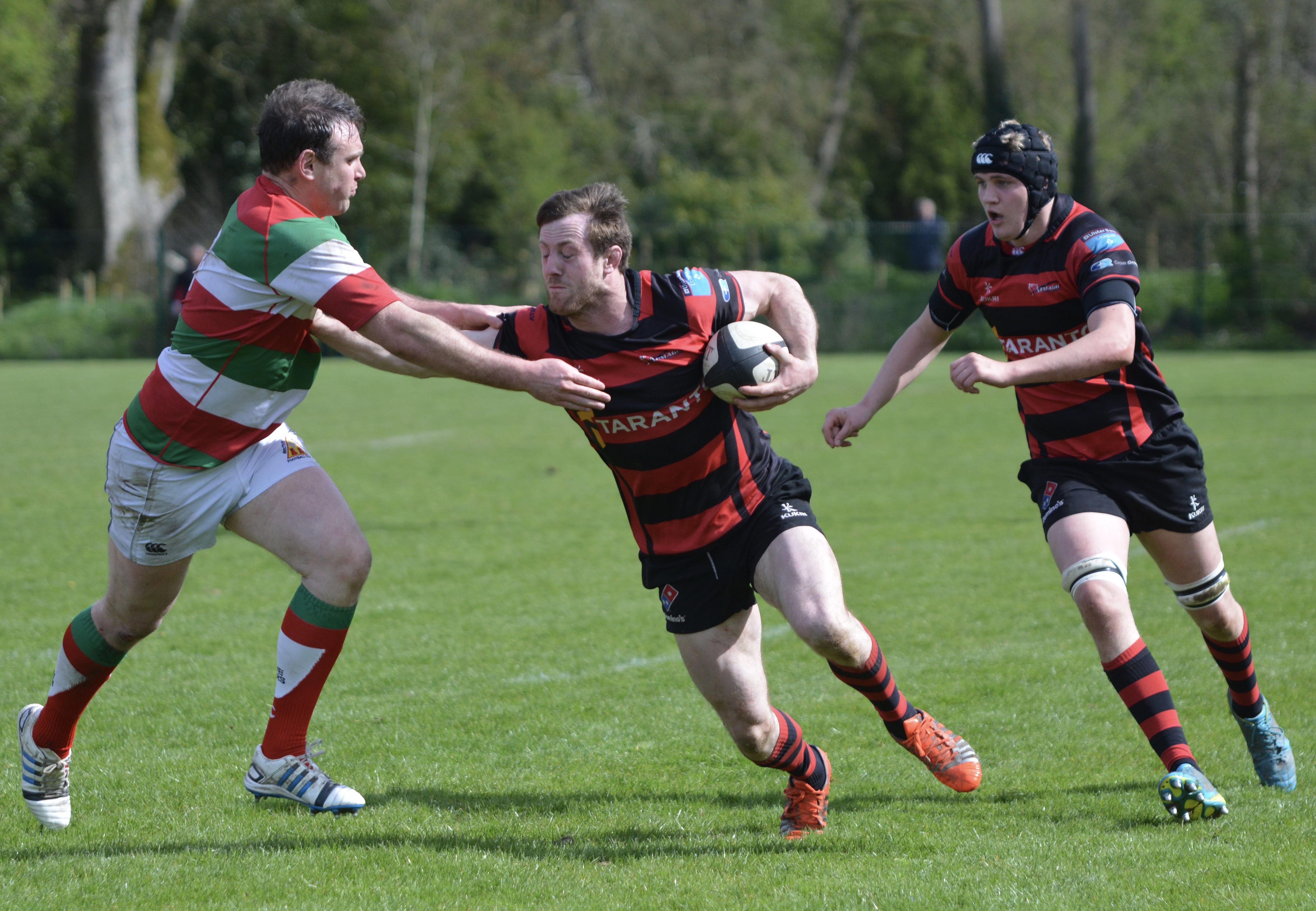 Team Captain Ali Birch breaks in the first half.

Currently Armagh held on to second position in the 2B League a single point behind ,rivals, Greystones. This side having a significantly better points difference were almost certainly destined to take the league honours.

As Bective’s captain Gearoid O’Grady kicked-off there was an intensity in the air seldom experienced in The Palace Grounds. After only five minutes play Armagh’s full-back, Timmy McNeice, dived over to score in the left corner. Harvey Young’s difficult conversion was on target to open the score at 7-0. Just after the re-start Armagh were penalised fjust outside their ’22’ for collapsing a maul.

The Bective captain’s kick opened their score at 7-3. Although the Armagh’s pack was visibly lighter they were seen to more than hold their own in the set pieces due to better technique. They were, however, caught off-side and, again the penalty kick was on target to narrow the score to 7-6. The narrowed score-line appeared to boost the moral of the visitors and another successful penalty kick put them 7-9 ahead for their efforts!

Armagh kept focussed and were rewarded after a series of 10-11 phases of play inside the Bective ’22’ when the Armagh scrum-half Harry Doyle dived over to score Armagh’s second try. The conversion carried wide in the freshening breeze to leave the score at 12-9.

Armagh appeared to step up a gear at this stage of the game & a spirited run from second row forward, Josh McKinley just failed when he was forced into touch five metres short of the Bective try line.

The visiting full-back was caught off-side and Armagh went for the corner touch option. The line-out was secured which, in turn, set Man-Of-The-Match, Stuart Lester, free to score a text book try under the posts. Harvey Young’s conversion brought the half time score to 19-9.

With the breeze freshening the second half started off with a Bective back row forward being penalised for “breaking his bind” in a scrum just left of the posts. Unfortunately the wind carried the ball left of the posts.

The visitors came back into the game again when Aidan Mulligan scored a try which, when converted, narrowed the score to 26-16. Within five minutes of the re-start the Bective captain & kicker,O’Grady, was sin-binned for a high tackle. Another try from Armagh’s Stuart Lester sealed the result as he scored the bonus point try. Cormac Fox’s conversion was on target to bring the score to 31-16.

Armagh’s final score came form a copybook try when the ball was quickly passed along the backs to winger, Ryan Purvis, who touched down in the left corner. The final score 36-16 reflected a sound performance from the Armagh side.

With Greystones winning 45-10 over Old Crescent the net result of the afternoon was that Greystone won the league & promotion whereas Armagh had to be content with second spot.

Armagh now have to play Dublin side, Wanderers, at The Palace Grounds next Saturday in the first play-off fixture.