City of Armagh slip to successive defeats with loss to Greystones 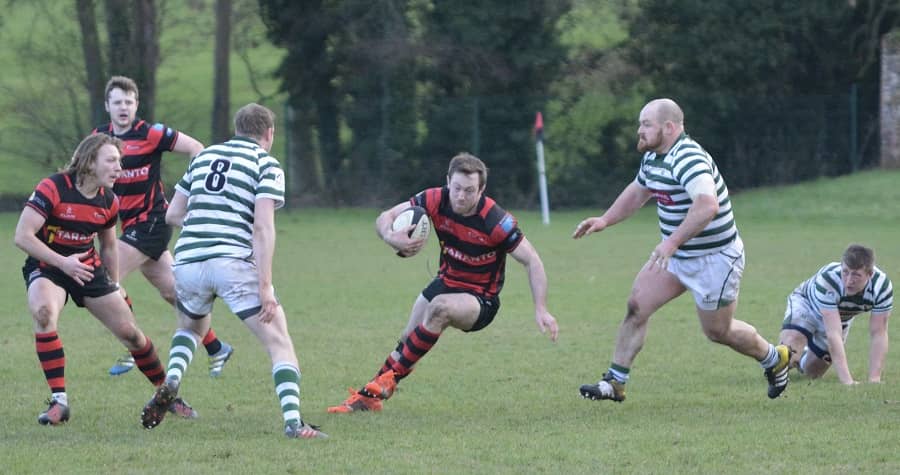 City of Armagh were looking to bounce back after their first defeat in the All Ireland League and Greystones, lying in second position were to prove tough opponents at the Palace Grounds.  The biggest crowd of the season turned out in eager anticipation of a home win but the visitors were more clinical on the day and deserved their 12-18 victory.

Greystones kicked off and immediately put the home team under pressure. Indeed for the first 10 minutes Armagh barely touched the ball and the visitor’s enterprise was rewarded with an unconverted try on seven minutes.  Poor defence saw the Greystones number 4, unmarked on the wing, and he scored the softest of tries from 10 metres. Greystones then let Armagh off the hook when they missed a penalty in front of the posts from 30 metres. Good interpassing from the visitor’s backline threatened the Armagh defence but a penalty allowed Armagh to clear the danger. Outhalf Fox put in an excellent kick for territory and when Greystones tried to run the ball out of their 22, they were penalised and Fox got Armagh on the scoreboard at 3-5.

The home team got more into the game in the second quarter and Greystones began to make errors but both teams were guilty of turning over possession too easily.

On 27 minutes, Birch and Hanna made good progress with ball in hand and the visitors infringed for Fox to kick the resulting penalty to put Armagh ahead by the narrowest of margins, 6-5.

A good box kick from Harry Doyle saw Greystones penalised and Armagh spread the ball wide but winger Kyle Faloon was bundled into touch. Greystones returned to the attack and the home team gave away a penalty on their 22 for the visitor’s outhalf to edge his team back in front 6-8.

Greystones finished the half strongly and Armagh just held the visitors at bay with a couple of vital turnovers. In time added on, Greystones’ winger attempted a 50 metre penalty but the kick was not accurate much to Armagh’s relief as the half time whistle blew.

The second half commenced with Armagh making a much better start and winger Andrew Willis made a great break which Harvey Young supported to continue the sweeping move and a try looked on the cards but the final pass went to ground a couple of metres from Greystone’s tryline. The visitors killed the ball and the referee gave a yellow card to the Greystone’s outhalf. Armagh elected to go for a scrum and a second penalty was awarded. Scrum number three resulted in a third penalty to Armagh and for the second week running the supporters were wondering why no penalty try? A controversial penalty to Greystones then saw them clear their line and Armagh had missed a huge opportunity.

On 50 minutes Daryl Morton entered the fray following a long term injury and won a penalty on the Greystones 10 metre line. Fox’s long range effort was short but the outhalf was successful with his third penalty on 60 minutes to edge Armagh ahead 9-8.

Greystones attempted a short restart but Chris Colvin was alert and made a great break but a forward pass saw the move breakdown.

Two minutes later following another Armagh turnover in their own half, Greystones moved the ball quickly and their right winger kicked ahead and won the race to touch down for a crucial score out wide. A superb touchline conversion put Greystones ahead 9-18 and Armagh needed two scores to rescue the match.

With 12 minutes remaining, Harvey Young moved to outhalf and Stewart Lester switched to the centre as Armagh scrambled for a score of any kind to rescue a losing bonus point.

TC Campbell, on at scrum half, made a great break into the Greystones half and some last gasp defending led to a second yellow card for the visitors. A penalty was quickly tapped and took play to the 22 where a further infringement in the final minute gave Young the opportunity to kick three points for the home team. A successful kick delivered the losing bonus point as the final whistle went with Greystones holding out for a valuable 12-18 victory.

Armagh remain on top of Division 2B with a single point advantage now over Greystones. The home coaching team were disappointed with the result and the performance as the team had ample possession to win this match but didn’t convert their chances and Armagh’s higher error count was the difference between the teams.

A week’s break will let the squad take stock and prepare for the next match, a tough encounter away to Limerick side Old Crescent who have now climbed to third position in the league.