City of Armagh see off challenge of Dungannon in derby 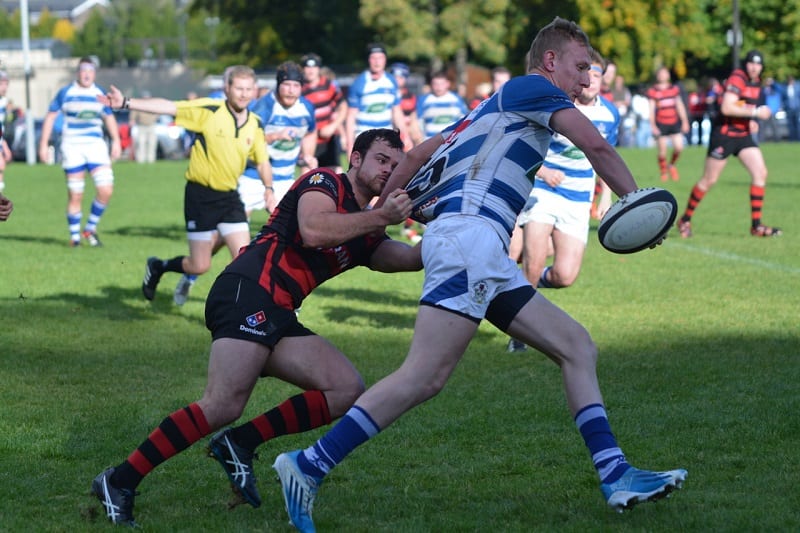 City of Armagh and Dungannon met at the Palace Grounds on Saturday in the Quarter Final of the First Trust Senior Cup.

The heavy rainfall in the morning had cleared and the match kicked off in bright sunshine.

A penalty kick in the second minute was missed by Armagh outhalf Harvey Young but he made no mistake with his second attempt a minute later to give the home team an early 3-0 lead. Dungannon’s full-back, Paul Armstrong opened his team’s account on the thirteenth minute to level the score at 3-3 but straight from the restart, the visitors were penalised and Young put Armagh ahead 6-3.

Dungannon continued to threaten the Armagh defence and a great 50 metre clearance from Timmy McNeice relieved the pressure on the home team. Daryl Morton and Ali Birch combined well up the blind side but the ball was cleared by Dungannon who were tackling strongly. Approaching half time, Armagh number 8 Neil Faloon had a storming run into the Dungannon half but a knock on let Dungannon off the hook. The same player however did get Armagh’s first try on the stroke of half time when he powered over following a 5 metre scrum. The conversion was unsuccessful and Armagh led 11-3. Josh McKinley caught the restart and charged up-pitch and great pressure from Armagh almost led to a second try. Unfortunately, full-back McNeice lost control of the ball as he was about to touch down for a certain 5 points.

The second half started with Armagh narrowly ahead and straight away Dungannon missed a penalty to close the gap and the visitors were punished when a 35 metre penalty by Young stretched Armagh further ahead 14-3. Soon after, Ali Birch broke from the back of a lineout and made 30 metres into the Dungannon half where the visitors were again penalised by the referee and Young’s kick made the scoreline 17-3.

Into the final quarter and Dungannon kicked a penalty to the corner looking to catch and drive.
A quick tap penalty saw prop Bennett drive over and the conversion had the visitors right back in the match at 17-10.

The Armagh team stepped it up a gear and played some great rugby, pinning Dungannon back in their 22. A crash ball to prop Morton saw him burst over the line for Armagh’s second try and Young’s conversion gave the home tem a comfortable lead at 24-10 with ten minutes remaining.

Dungannon however were not throwing in the towel and they pinned Armagh back in their half in this entertaining encounter. A series of penalties in the Armagh 22 saw the referee award the visitors a penalty try under the posts. Armstrong converted and a scoreline of 24-17 would lead to a nervous final few minutes for the home team. It was Armagh however who finished strongly and camped in the Dungannon 22. Replacement hooker Andrew Smyth barged over for the final score of the game and the final score was 29-17 in favour of Armagh who progressed to the Cup semi-final where they will travel to play Belfast Harlequins.

The Armagh coaching team were relatively happy with the hone team’s performance against a much improved Dungannon side who played with passion. A number of players were rotated which allowed some fresh faces to step up to the mark. The team can now enjoy a week’s rest before the All Ireland League resumes on October 29th.