City of Armagh prevail to maintain their winning run 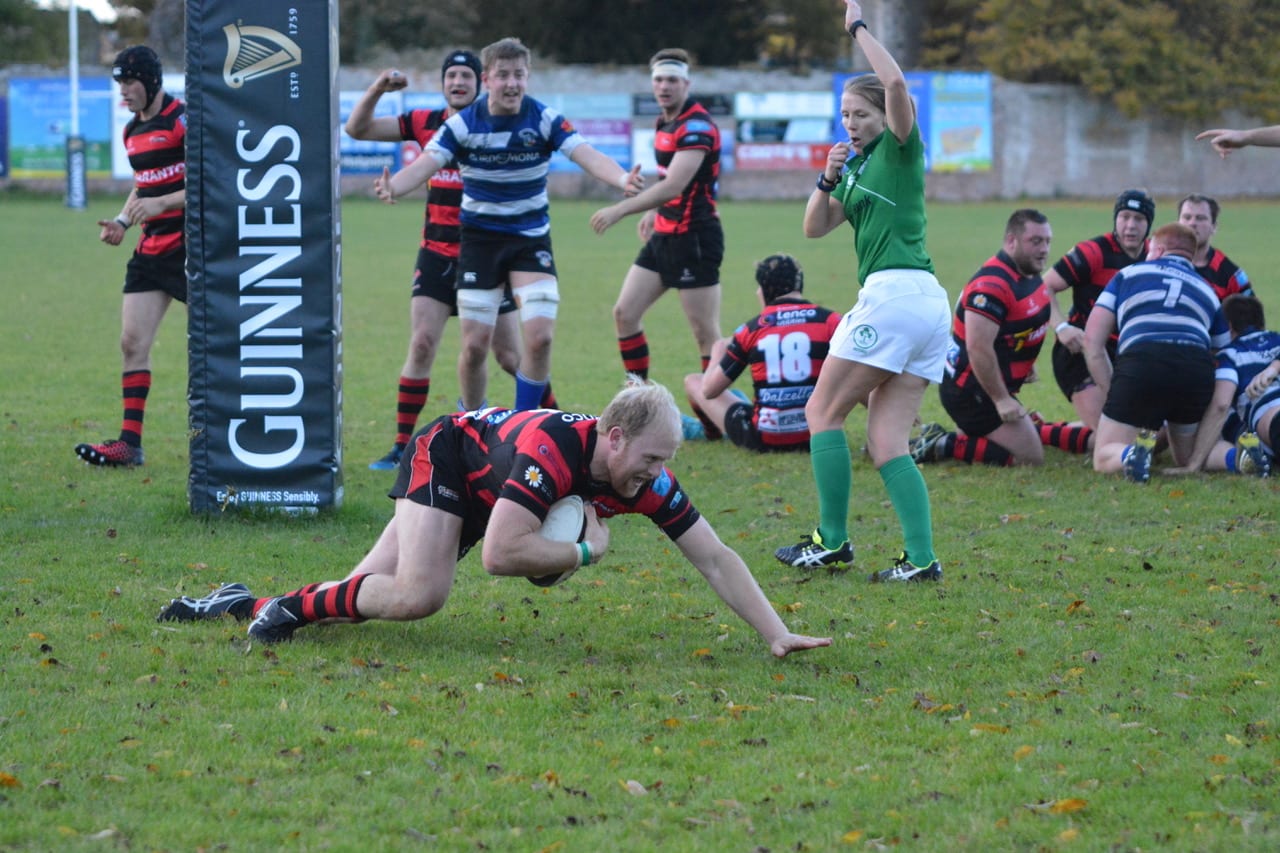 Old Crescent RFC made the long trip from Limerick on Saturday to challenge Armagh’s unbeaten run in Division 2B of the All Ireland League.

The home team didn’t play to their best but they prevailed to maintain their winning run with a 21-9 victory.

In perfect sunny conditions with a chill in the air, Armagh kicked off playing into a slight breeze. The visitors brought play to the Armagh 22 and in the second minute missed a straight-forward penalty from 25 metres. A more difficult attempt was successful a few minutes later from 50 metres to put Old Crescent ahead 0-3. On 14 minutes, a late tackle on an Armagh player resulted in a successful penalty to level the score at 3-3.

Both teams were making errors in the early stages and were content to test each other out with probing kicks. The second quarter saw the two teams lose possession frequently and the game was evenly balanced. On thirty minutes Armagh number eight Neil Faloon received a yellow card and Old Crescent kicked the resultant penalty to edge ahead 3-6.

As the halftime break approached, Armagh attacked from the halfway line and a kick ahead was recovered to send winger Andrew Willis racing to the try line for an outstanding score. The try was unconverted and referee, Helen O’Reilly, blew for halftime with Armagh leading 8-6 after 40 minutes of uninspiring rugby apart from the Armagh try.

Old Crescent kicked off the second half in determined fashion and put the home team under immediate pressure. Promising attacks saw the visitors penalised at the breakdown on several occasions and Armagh were able to clear their line.

Fifteen minutes into the second half and Old Crescent received a blow when their number eight was sent to the sin bin. Armagh took a quick lineout and caught the Old Crescent defence napping and John Faloon made good ground on the right wing before being halted short of the try line. The visitors infringed and Harvey Young kicked the penalty to put Armagh ahead 11-6.

Armagh tried to use their numerical advantage and a strong run from Willis looked promising until Old Crescent relieved the pressure with a turnover. With 15 minutes remaining Armagh were still trying to make the game secure but Old Crescent were proving very competitive.

Good play from Armagh led to a five metre scrum in front of the Old Crescent posts to give the home team a great attacking position and Neil Faloon stormed over for five valuable points and the conversion made the score 18-6.

Old Crescent returned to the attack and a successful penalty reduced arrears to 18-9. The visitors then pressed for a further score in search of a losing bonus point. As full time approached, Old Crescent were penalised on their 10 metre line and Purvis kicked the 3 points to bring the scoreline to 21-9 and the final whistle went confirming Armagh as victors by a score of 21-9.

Overall the team’s performance did not please the Armagh coaching team but they were happy to take the win. A lot of work is still required on the training ground and it was good to see Peter Elliott returning from a lengthy injury and he put in a man-of-the-match performance.

With six wins from six, City of Armagh now has the best record in all five divisions of the All Ireland League and the team will be hoping to maintain this successful run this Saturday when another Limerick side, Thomond, travel to Armagh for a 2.30pm kick off.