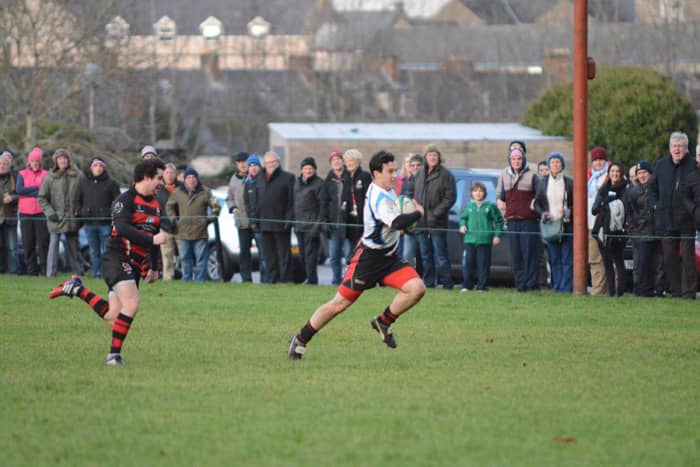 With the under performances against Highfield & Wanderer’s now long behind them and the positive results against Ballymena and Ards still fresh Armagh entertained their old rivals, Rainey, in a very positive mode.

The game kicked off in cold but calm conditions. The first ten minutes of play saw both team test each other with neither side producing any real results. Willy Martin and Chris Colvin both made breaks but neither produced any points.

Rainey opened the scoring when their out-half, Gavin Martin, found the Armagh defence lacking from a scrum inside their 22 and broke through to score just left of the posts. Unfortunately his conversion went wide to put the visitors 0-5 ahead with fifteen minutes on the clock. Rainey were caught playing the ball in a ruck in front of their posts and Matthew Steenson was accurate with his kick to bring the score to 3-5. From the re-start Armagh appeared to take on a more positive mode and began to dominate the set-pieces.

Having won a scrum Armagh’s number 9, Harry Doyle, broke from the base of a scrum on the half way line to score a beautiful try in the left corner. Steenson’s conversion went wide by the slimmest margin to put the home side 8-5 ahead.

The Rainey out-half showed some class as he scored a fine drop-goal from outside Armagh’s 22. The first half ended as Lorcan McGillan missed a penalty as his kick literally brushed the post.

The second half saw Armagh begin to win the battle ‘up front’ with Stephen Morton showing great form with a number of great breaks. Indeed, the Armagh pack were now seen to be the sharper in open play as well as set pieces.

Again, penalties abounded with Rainey being caught off side inside their 22 which Matthew Steenson kicked to give Armagh the narrow 11-8 lead. Armagh now started to exert pressure and James Hanna forced his way through several Rainey defenders to score at the posts. Again Matthew Steenson’s kick was good to finish the scoring at 18-8.

As is always the case, both coaches breathed sighs of relief at the final whistle. To come through any Ulster Senior League fixture such as this game with no injuries is undoubtedly regarded as a plus point. It was very rewarding to see Armagh more than capable to contain the Rainey side but to see the Seconds win also is exceptional not to mention the youth under12’s win also.
All in all a very successful afternoon for Armagh Rugby.

The first fifteen don’t have a game until 17th January when they travel to Malone for the next Ulster Senior League fixture.