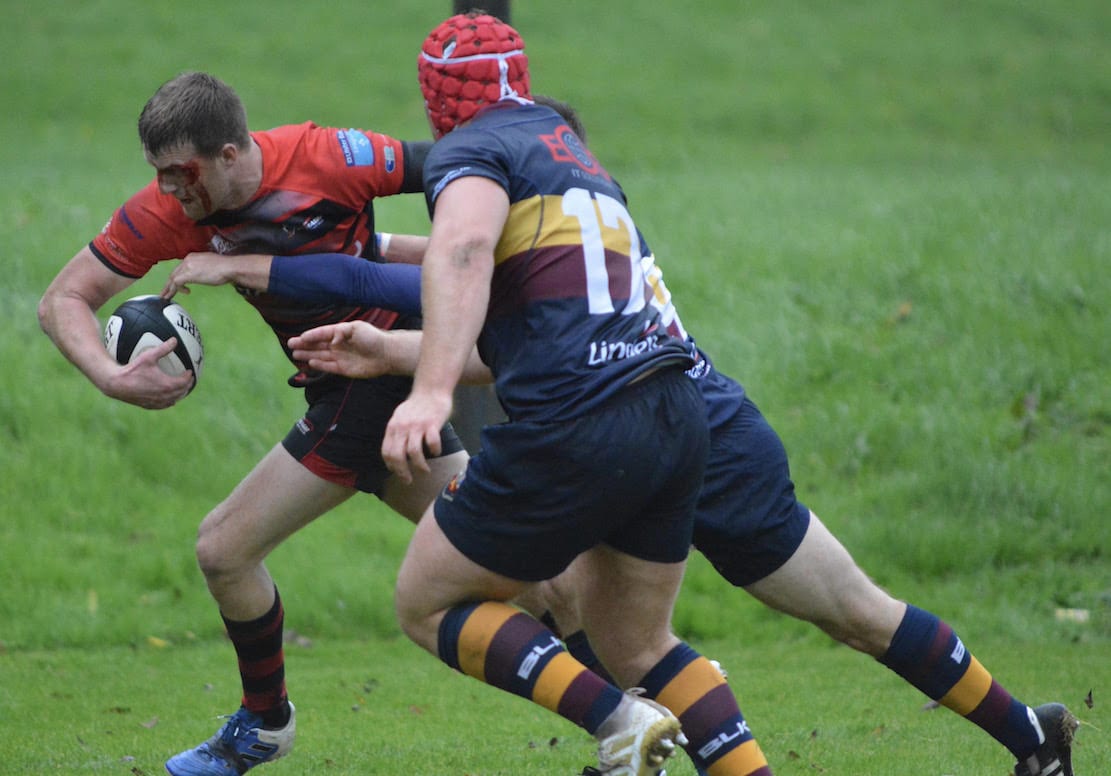 Underdogs City of Armagh made history on Saturday when they reached the semi-final of the First Trust Senior Cup for the first time ever, by defeating neighbours Banbridge 16-6 at the Palace Grounds.

Both teams rotated their squads with Armagh’s Phillip Matthews and John Faloon moving up from the seconds, along with Chris Cousins who was making his senior debut.

A huge crowd had gathered despite the damp conditions and before the match kicked off, a minute’s silence was observed in respect of Past President, Des Fitzgerald who had passed away during the week.

It was the home team who started the match brightly and an early attack almost led to a try on seven minutes. Good forward driving brought play into the Banbridge 22 and a knock on a yard from the tryline let Banbridge off the hook. On 17 minutes a Banbridge prop was penalised and Cormac Fox kicked a tremendous penalty from 45 metres to open the home team’s account.

The wet conditions were making ball retention difficult and Banbridge were hampered by a number of handling errors. Centre Chris Colvin made a lovely break from halfway and Neil Faloon was up in support but Banbridge defended well and cleared the danger.

On 25 minutes, Fox kicked his second penalty of the afternoon to put Armagh ahead, 6-0 which reflected how the game had started. Banbridge put some good phases together and their backline looked threatening but conceded a penalty close to the Armagh line for the hosts to clear. Morrison the Banbridge centre then broke through on the half hour mark and a try looked on the cards but Armagh’s defence managed to hold firm. The visitors then had their best spell of the half with a number of catch and drives in the Armagh 22 but the pressure was relieved with a penalty to Armagh in front of their own posts.

A break from Armagh flanker James Hanna, on for the injured James Morton, brought play into Banbridge territory but the half time whistle went with the scoreline remaining 6 nil to Armagh in what was a tight and tense contest.

The second half commenced with Armagh on the attack and a clever kick ahead from Fox had the Banbridge defence in trouble but they recovered to touch down for a 22. The visitors then stepped up and gear and it was Armagh who were pinned back in their half. A great try scoring chance was lost when the final pass went loose allowing Armagh to relieve the pressure. On 53 minutes, Banbridge were rewarded for their efforts with a penalty opportunity and Adam Doherty made no mistake from 30 metres to make the score 6-3.

Armagh restarted for Banbridge to knock on and the visitor’s scrum was penalised with Fox kicking his third penalty to restore Armagh’s 6 point lead at 9-3.

On sixty minutes Banbridge brought on four subs and their impact was immediate with Ian Porter pinning the home team back with some probing kicks. All the pressure was now coming from Banbridge and scrum half Porter kicked a penalty to close the gap to 9-6. A clever chip over the Armagh defence almost brought the visitors a try, but the home team managed to clear the danger with a terrific touchline kick.

With ten minutes remaining the Armagh supporters were hoping their team could hang on and their hopes were raised when Ali Birch finished off a great Armagh attack by crossing for a try in the left corner. A superb touchline conversion from Fox made the score 16-6 with the visitors needing two scores to win. Banbridge tried their best to rescue the match but it was City of Armagh who were victorious when the referee blew for full-time.

The Armagh coaching team were delighted with the win and the performance was far superior from the previous week’s outing at Blackrock. “Banbridge was a massive test for our boys and we are delighted to make the cup semi-final stage”, commented Back’s Coach Chris Parker.

The team now takes a well-deserved rest this week and attention will focus on Saturday on Armagh Seconds when they host Coleraine in the Junior Cup quarter-final at the Palace Grounds.

The seconds travelled to Coleraine to play the local 1 st xv in another conference league game knowing that this was the first of two consecutive games with Coleraine in two weeks.

Coleraine will be the visitors to the Palace grounds next week in a Junior cup quarter final tie. The game kicked off in overcast but dry conditions with Armagh getting into their stride immediately with the forwards winning ball and the backline probing the Coleraine defensive line.

One of several early Coleraine infringements led to a converted penalty by Harvey Young on 4 minutes, 3-0 to Armagh. Coleraine missed a straight forward penalty opportunity then shortly after from an Armagh lineout on the home 10 metre line, Holden saw a gap and made a great break through the first line of Coleraine’s defence to put Young in the clear for a try at the posts.

He added the conversion to make the score 10-0 to the visitors.

The Armagh forward unit were tackling like demons and Coleraine’s big ball carriers did not gain the momentum they had hoped for. Young accepted another penalty opportunity from 35 metres to stretch the Armagh lead to 13-0.

In the second half Coleraine immediately took play deep into the Armagh half and only a determined defensive effort kept the line intact.

Holden and Young kept orchestrating the backline and when an attacking move took play into the Coleraine half, Young make a break from 30 metres and touched down to the right of the posts.

With his successful conversion, the score was 20-0 with 15 minutes to play.

Despite being down to 13 players in the second half for a period of time due to 2 yellow cards, Armagh battled for every ball and
continued to defend their line. Near the final whistle, Coleraine continued to press and after sustained forward pressure near the try line, a home second row forward stretched over beside the posts for a converted try.

This lifted the home crowd who were hoping for a big finish from Coleraine to narrow the gap, however Armagh battened the hatches to close out the game.

Armagh Thirds lose out to Portadown

It was always going to be tough encounter for Armagh RFC thirds against Portadown seconds in the Crawford Cup at Chambers Park, and so it proved to be. Although The Armagh lads took an early lead when a penalty against Portadown for a high tackle was slotted between the posts by Andrew Knipe their lead was short lived and never regained. When a line out throw by James Rolston was deemed not straight by the referee and a scrim was conceded Portadown were able to push over from the 5m line for an unconverted try. Try as they may, too many simple mistakes meant that Armagh were unable to penetrate the Portadown defence. As the first half neared an end the older and perhaps wiser home side pack took control and managed a converted try on 36minutes to finish the half with a 12 points to 3 lead.
The second half continued in a similar vein and although Portadown missed an early penalty they took advantage of some Armagh mistakes to score again on 51minutes with a converted try for 19-3. A resurgent Armagh struck back when a missed kick to touch by Portadown was collected by Scrum half Trevor Girvan and fed to Andrew Brady on the wing. Showing real determination and demonstrating slick footwork Brady ran from his own half avoiding Portadown tackle attempts to cross the line for a converted try and closing the margin to 9 points.
Armagh enjoyed a better period of forward play with captain Neill Lutton, Oliver, McBride and  Bingham leading the charge against the Portadown forwards and the backs, notably Ruari Karlsen making some big hits and the wings, Dougan and Brady playing their part but with no additional points on the scoreboard. Portadown finished the stronger side. A converted try and a penalty meant that at the whistle Portadown deservedly won the tie by 32 points to 10.
Armagh left the pitch disappointed but not downhearted. They certainly played well and can build on the experience by ironing out some mistakes and reducing their penalty count to take the league by the scruff of the neck.
Armagh team: N Lutton, J Rolston, C Chapman, J Gilpin, C Simms, T McBride, D Bingham, T Girvan, G Falcon, J Dougan, A Knipe, A Winder, A Brady, L Crozier.