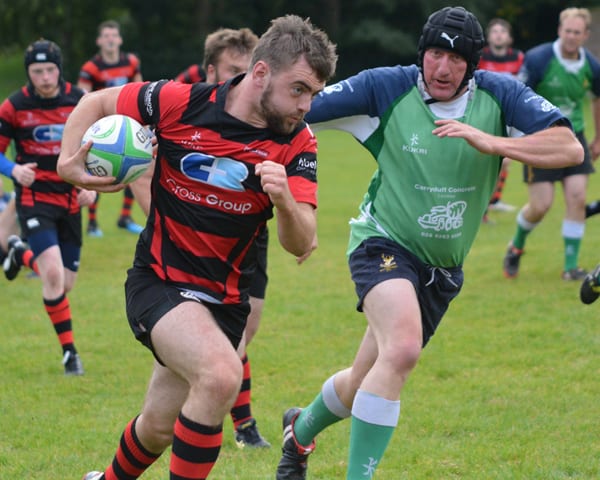 City of Armagh 4th XV welcomed the Ballynahinch Evergreens to the Palace Grounds on Saturday afternoon looking to get their season back on track following successive defeats at the hands of Belfast Harlequins 3’s and Bangor 3’s.

The team was boosted by the inclusion of a few of the clubs players returning from injury and there were changes to the team right until kick off with some players from the clubs third team opting to play following City of Derry’s decision not to travel for their fixture.

This experienced Ballynahinch side put Armagh under pressure right from the off running at them in  waves, Armagh found themselves trapped inside their 22 desperately defending their try line mere minutes into the game.

Unfortunately they could only sustain the pressure for so long and the visitors crossed the line for their first try of the day. The two points were added from the conversion shortly after. This fours side, typically slow starting had been caught on the hop once more, they needed to react quickly to avoid falling further behind.

The game was re-started and almost immediately Armagh found themselves on the defensive foot again. A second try soon followed as the ball was spread wide, a touchline run by their winger saw the ball touched down in the corner. A lack of communication between the backs and a few missed tackles were the cause of this try.

Once again the conversion was added to give Ballynahinch a comfortable 14-0 advantage with the first quarter of the game coming to a close. Armagh began to assert some authority on the game up front they were winning ball and opting to let their backs run at the aging Ballynahinch defence. It was beginning to pay dividends too as the lads were rewarded with a well worked try.

The ball was spread to the returning Matthew McSorley in the centre who negotiated his way through the ‘Hinch midfield with some lovely footwork to leave himself in acres of space. His pace carried him until he was under more pressure at which point he offloaded to winger David Loughran who went on a similar weaving run. Now inside the 22 and in front of the posts a fine off-load from Captain David Loughran saw McSorley through for Armagh’s opening try. The conversion in front of the posts was added by Loughran to leave the sides at 14-07 to the visitors with ten minutes of the half remaining.

The try came at a great time for Armagh who began to press for a second, another few great carries from our French winger Antoine-Marie Renauld and back row Adam Hume almost saw the lads in  once again only for the ball to be turned over inside the 5m. A third converted Ballynahinch try on the stroke of half time brought the curtain down on an entertaining first half of rugby with the Half Time Score; Ballynahinch 21, Armagh 07 with it all to play for in the second half.

The lads emerged for the second half revitalised and ready to attack the 14 point deficit, sadly the second half was much of the same for the lads. Armagh showed much promise, however for all their endeavour they could not get that final ball together to finish off many of their fruitful attacks.

They were not helped by the loss of influential players to injury including their two half backs, Trevor Girvan (Groin) and Stuart Agnew (Ribs). A reshuffle of the backs saw many of the lads trialling new positions and there is no doubt this had a major impact on the outcome of the game.

The maturity of this travelling side began to show in the second half, some wise decision making and kicking saw them gain great territory down the field to begin their attacks on the Armagh line. Nevertheless our lads did not relent as Ballynahinch were made work for all four of their second half tries. Further injuries to Weston Clendinning and Antoine-Marie Renauld saw Armagh reduced to fourteen men for the final few exchanges of the half. Full Time Score; Ballynahinch 47, Armagh 07.

Although the lads did not come away with the result they had wished for, this young side will have learned much that will stand to them in the games ahead from playing against a team of Ballynahinches calibre. Hopefully the injured players will have recovered in time for the trip to Queens in two weeks time we wish them the best of luck in their rehabilitation.