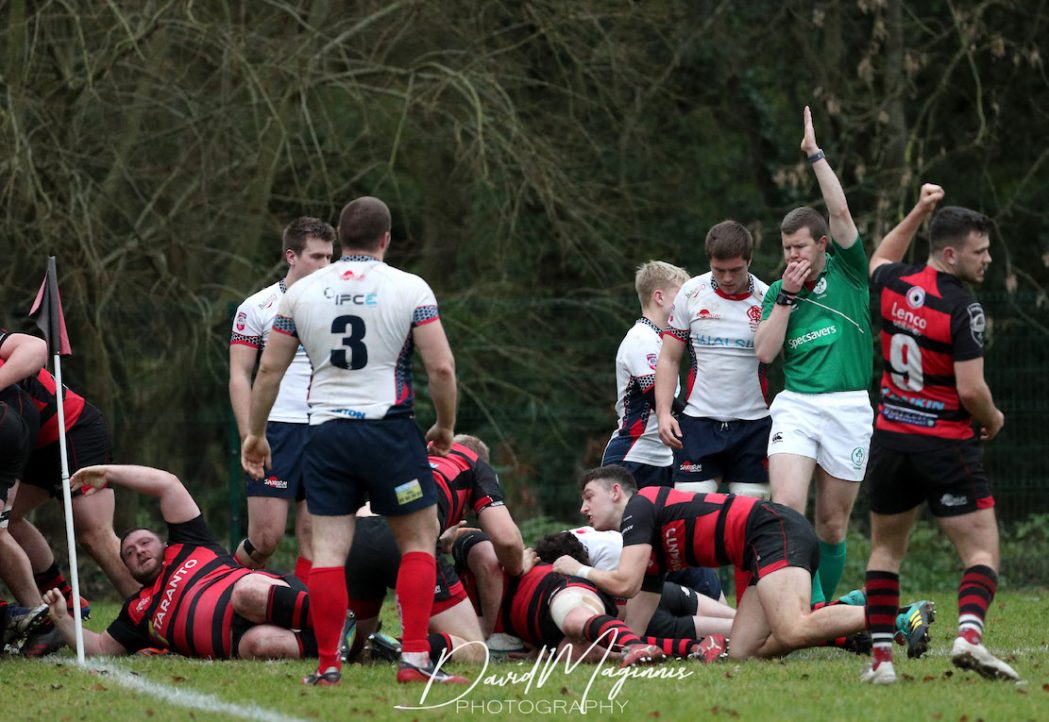 City of Armagh ended their three game losing run by winning a thrilling match at the Palace Grounds on Saturday when they came from behind to defeat Malone 22-20.

Armagh kicked off facing a stiff breeze in dry but cold conditions and Malone’s outhalf, Jack Milligan put a great kick deep into Armagh’s 22. The home secured the lineout and cleared but it was the visitors who were making the brighter start. Another well placed kick had Armagh in difficulties and a wayward pass led to a five metre scrum.

The two packs flared up and referee Eoghan Cross sent a prop from each team to the sin-bin after a feisty start to the game.

Armagh then disrupted the Malone scrum and won a valuable turnover which turned into a scrum penalty. Malone continued to dictate play and good forward driving had Armagh on the back foot in their 22. On 17 minutes, Malone were awarded a scrum 15 metres from the Armagh line and number eight Azur Allison picked up and passed to Stuart Moore and the Irish U20 centre showed his strength to cross for the game’s opening try. Milligan’s conversion put Malone 0-7 ahead.

Five minutes later, the home side were awarded a penalty for off side and Cormac Fox kicked down the line for an attacking lineout on the Malone 22. The ball was secured and the Armagh forwards set up a drive that remarkably reached the Malone tryline and flanker Barry Finn touched down for Armagh’s first score. The conversion was unsuccessful but Armagh were off the mark at 5-7.

Malone kicked off the restart and won a line-out in Armagh territory. A clever trick play saw them gain 15 metres. Good continuity had Armagh under pressure and with a penalty advantage being played, Milligan kicked cross field where Azur Allison was waiting unmarked to cross for Malone’s second try. With half an hour played, the conversion by Milligan made it 5-14 on the scoreboard.

Two minutes later, things got worse for Armagh when winger Josh Morton received a yellow card for a deliberate knock on in the Malone 22. Malone’s penalty was sent down the line but Whitten stole it for Armagh and Treanor cleared well. With five minutes of the half remaining, Armagh won a scrum penalty and set up another attacking lineout on the Malone 22. Malone conceded another penalty for collapsing the maul and Armagh’s next lineout was 2 metres out. The ball was secured and the Armagh pack showed their dominance by scoring from the maul. Hooker Andrew Smyth claimed the touchdown and Cormac Fox was unlucky the wind held up his conversion.

The half time whistle went with City of Armagh right back in the match at 10-14.

The second half commenced with Armagh receiving the kickoff. Naïvely they tried to run the ball out of their 22 and were turned over. From the scrum Malone were awarded a penalty but a quick tap was knocked on and Armagh were let off the hook.

With 5 minutes of the second half played, Armagh stole another line-out on the Malone 22 and slick passing moved the ball, with full back Shea O’Brien entering the line to send left winger Josh Morton in for a superb try. Fox was narrowly wide with his conversion attempt but Armagh were now ahead by the narrowest of margins, 15-14.

The home side were now in the ascendancy and forwards and backs combined to stretch the Malone defence. Andrew Willis, Robert Whitten and Neil Faloon all combined before a knock on brought the attack to an end, 2 metres from the Malone tryline. A scrum penalty saw Malone clear to their 22 but after overthrowing their line-out, Armagh failed to take advantage.

A series of handling errors from both sides saw a scrappy spell but then Malone looked set to score following a chip behind the Armagh defence. The ball was knocked on but the referee had been playing a penalty advantage to Malone. Milligan stepped up and slotted the kick to edge the visitors back into the lead at 15-17, with 54 minutes on the clock.

Malone then looked to stretch the Armagh defence out wide but the home side were well organised. A huge gap then allowed Malone to break up the middle and Armagh had to scramble back to recover. A cross field kick was then knocked on by Armagh in the air and Malone had an attacking scrum 10 metres out. Two phases later Armagh conceded a penalty in front of their posts and Milligan converted to stretch Malone’s lead to 15-20, with 63 minutes played.

From the restart, Malone won a penalty at the breakdown and Milligan put pressure back on the Armagh side with a kick deep into Armagh territory. This time the visitor’s line-out throw was not straight, letting Armagh clear the danger.

A scrum penalty gave Armagh the opportunity to get into Malone territory and with 10 minutes remaining on the clock another penalty was drilled into the Malone 22. 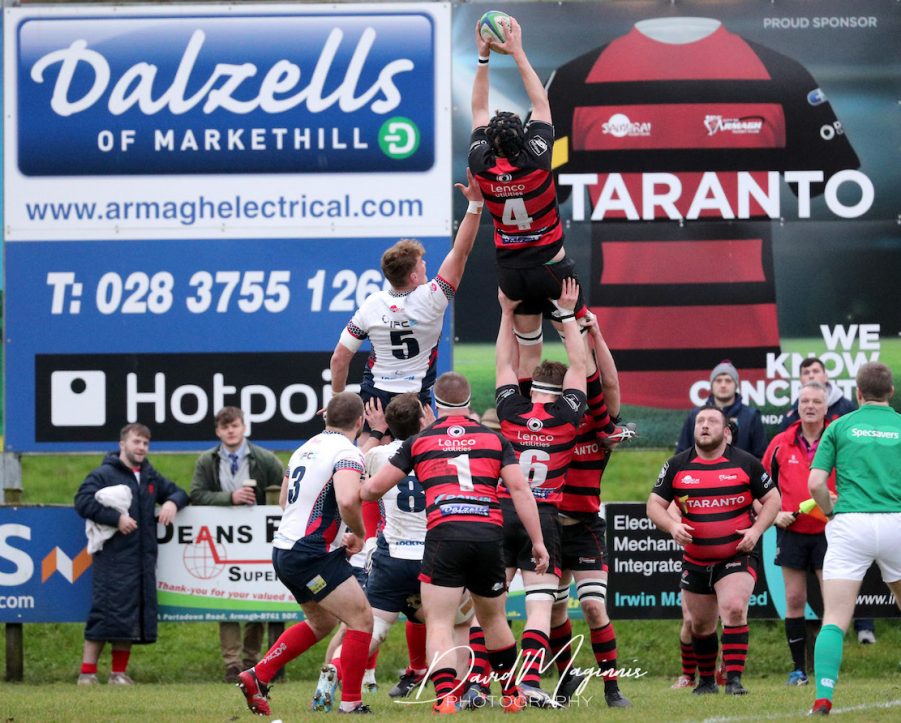 The Armagh line-out maul had been superb all day and the pack set up another drive from 15 metres out. The visitors couldn’t cope and with another infringement, referee Cross awarded a penalty try to the home side. City of Armagh were now ahead 22-20 with five minutes of the game remaining.

The home supporters got nervous when Malone were awarded a penalty on halfway and Milligan kicked down the line for a Malone line-out, 10 metres from the Armagh try line. The visitor’s woes continued when Armagh’s Josh McKinley stole the line-out. Malone came in from the side and Fox superbly kicked the penalty 55 metres into Malone territory. Whitten won the line-out and Gerard Treanor popped the ball out of play. The final whistle went with City of Armagh securing a valuable bonus point win with a scoreline of 22-20.

The result sees City of Armagh climb the league table to sixth place, with only 4 points between the third and eighth place teams.

The Armagh coaching team were delighted with a five point haul from a very competitive match.

Coach Willie Faloon commented: “We weren’t at our best today with a high error count in both halves.

“Our discipline was not where we want it to be either, given the high penalty count against us in the second half. It was pleasing however to see our forward domination get its reward with three well worked tries.”

Next Saturday, City of Armagh travel to Banbridge for another Ulster derby match. A big travelling support will be appreciated.