City of Armagh come from behind to see off Malone 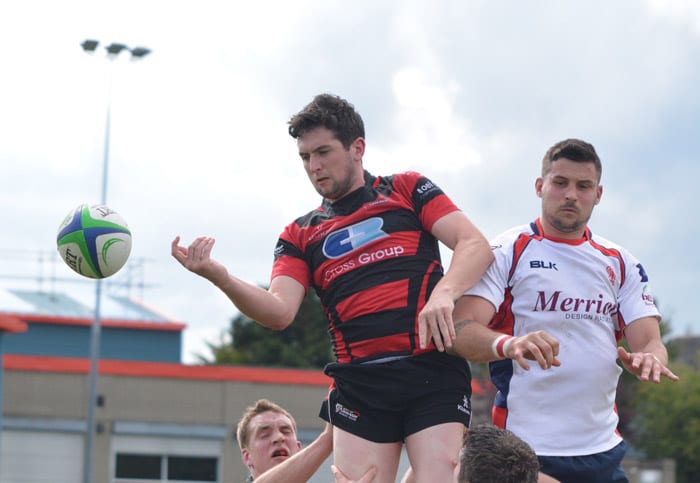 Armagh set of on to the their first match proper of the 2015-16 season on Saturday when they played Malone away in the Ulster Senior League.

Although they had played two pre-season fixtures against Ballymena & Queens this game was the point when the local club’s off-season training and coaching would be really put to the test.

Malone have had what could only be called a torrid off-season.

Their coach had decided to move on to other things during the ‘recruiting’ season resulting in the club losing 30-odd players.

This loss of ‘manpower’ will, no doubt, have a profound effect on the club’s performance when the All-Ireland league kicks off.

Saturday’s game kicked off in fine conditions with the home team taking the advantage of a fresh breeze at their backs. within ten minutes Malone’s number 13, Baker, scored a try as he forced his way through some porous Armagh defence.

The conversion was on target and suddenly the home team looked dangerous with a 7-0 advantage.

To add to Armagh’s worries they leaked another try in the right wing after 25 minutes play to bring the score up to 12-0.

Just before half-time the Malone number 7 was yellow carded reducing them to 14 men.

This advantage was short-lived, however, as Robbie Faloon was judged to have intentionally knocked-on and he too was carded on the stroke of 40 minutes.

The resultant penalty kick from Malone’s Mark O’Connor put the home side a convincing 15-0 ahead at the break.

One of Brian McLaughlin’s famed team talks at half time appeared to revitalise the Armagh side.

This coupled with the freshening breeze at their backs seemed to shift the Armagh’s game into another gear! Shortly after the re-start Armagh’s prop forward scored in the left corner.

Armagh’s kicker’s skills were then brought into question when he set up the conversion near the touch-line with the blustery wind at his back.

His kick was near perfect and landed his first kick of the afternoon directly on target. Directly from the restart Armagh launched another attack and the momentum resulted in a try from James Hanna just right of the posts.

This time Pollock’s conversion fell on to the cross bar but with the score at 15-12 Armagh began to show their intentions!

Malone, however, struck back with a try when their number 8 broke free from a line-out to score at the visitor’s posts.

The conversion opened out the score to 22-12. Shortly after the re-start the Armagh full-back, Harry Boyd, sent a beautiful clearance kick from deep within his own 22 to well down the left wing deep into Malone territory.

From the resultant line-out Malone were penalised and again Pollock kick put another three points on to the score board.

Malone responded with a try in the right corner to finish their scoring for the afternoon!

Josh Morton was able to break loose through the centre and touched down which was, again, converted to bring the score to 27-29.

This was the first time Armagh were seen ahead on the score board. Malone’s number 17 was yellow carded for using his hands in a ruck and the resultant penalty put Armagh 27-32 ahead courtesy of Pollock’s kick.

Again, the conversion was on target to finish off the scoring at 27-39.

Just at the final whistle the afternoon’s fine sporting display of fast, open rugby from both sides was slightly marred.

A seemingly harmless display of ‘handbags’ was seen by the referee and resulted in two players receiving red cards.

One from both sides. It was somewhat a pity that the game had to end on this note as both sets of spectators were treated to a magnificent display of fast, open, and fair rugby in great conditions.

All in all a great season’s start for both sides. Armagh’s coaching team nominated James Morton as Man-Of-TheMatch.