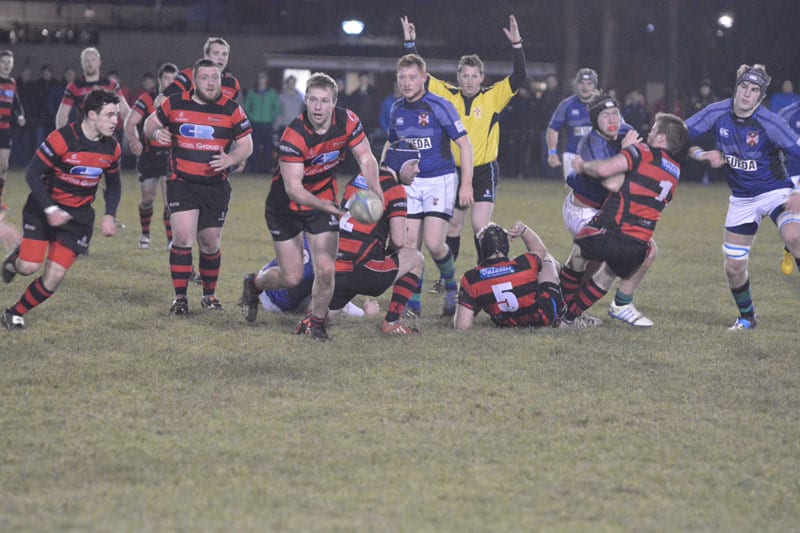 Armagh played their sixth fixture in the Ulster Senior league on Thursday when they entertained Queens University evening under lights on the Palace grounds.

Thursday’s game kicked off in ideal conditions and the home side found themselves on the wrong side of the referee’s whistle twice in the first five minutes of play.

Queen’s kicker, Ally Wright, promptly opened the scoring by logging six points on the board. Armagh responded by sending Neill Faloon over the line in a well-controlled rolling maul.

The conversion from Andrew Magowan went wide, however, but before the break Andrew’s boot put the home side 8-6 ahead with a penalty.

The second half saw the home side take control of the game as centre, Seamus Mallon (man of the match) scored Armagh’s second try. Shortly after Manihera Eden darted in for a try just right if the Queen’s posts. Mani then scored another try in the left corner to bring the score up to 23-6.

Not to be out-done Robbie Faloon then score a brace of tries and Andrew Magowan’s conversions closed the score at 37-6.

This score-line certainly showed a marked improvement on last season’s one point defeat, albeit with the home advantage.

There is still the matter of how armagh can be placed in third position in the Ulster Senior league with six bonus points from only six games yet they have only achieved four bonus points from ten games in the All-Ireland League!

However, with the confidence gained from this game armagh will travel to Drogheda to play Boyne next Saturday. It is imperative that Armagh do not fall int the complacent frame of mind seen when they were defeated by a mediocre Wanders side before Christmas.

At present Armagh have shown that they have real match-winning potential but consistency is the name of the real game! Remember that Armagh MUST end up in a top four league position to gain a spot in League Four when the IRFU rejig the league structures next season!