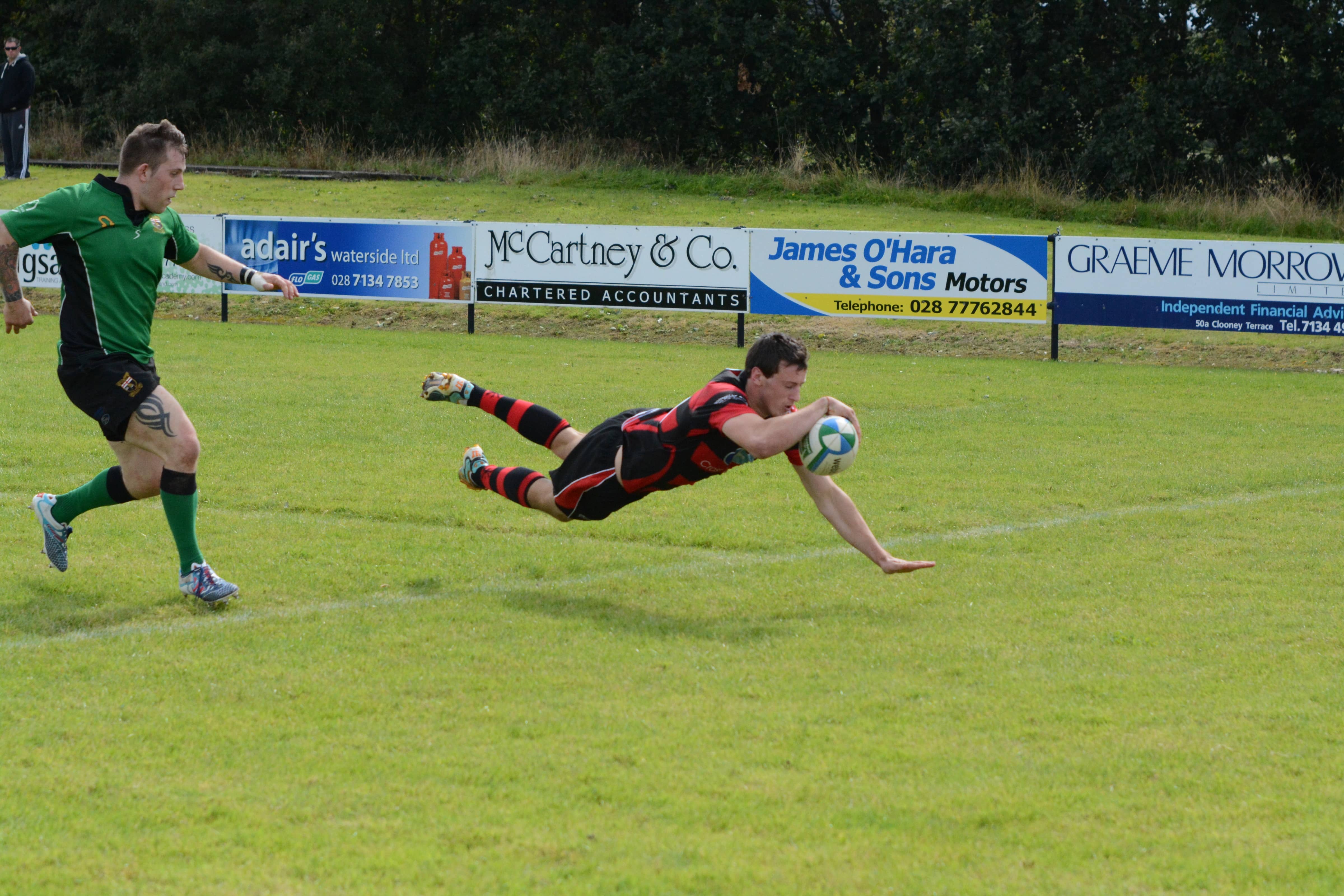 Saturday saw Armagh launch the 2014/15 season with an away fixture to City of Derry in the Ulster Senior League.

The Armagh side were fresh from their French tour and with a number of young, new faces on the team.

The home side kicked-off with a stiff breeze at their backs and almost immediately Armagh were penalised for not releasing the ball after only thirty seconds play.

The kick, however, went wide but the Derry side went ahead in the eighth minute when their left winger stormed over for a fine try. Again the kick went wide to leave the score at 5-0 but shortly after Derry scored again after som poor Armagh defending.

Yet again the conversion went wide but with the score at 10-0 Armagh decided to put their backs into the game.

Armagh’s centre Seamus Mallon broke through the Derry line and fed the ball to left winger Robbie Faloon who rounded his opposite number to score a beautiful try.

Armagh’s out-half, Magowan, was on target despite kicking into the stiff breeze to bring the half time score to 10-7.

The second half was played almost entirely in the Derry 22 as the visitors took advantage of the wind. The put in another two tries from Stephen Morton & Willie Martin.

Again, Magowan was able to convert both tries and a penalty to boot! This brought the score up to 10-24 but in the dying minutes of the game both the rain and the Derry attack became a threat to Armagh.

For five minutes Derry hammered loudly on the Armagh door but some resolute defending kept the home team at bay and the final score 10-24 gave Armagh a well deserved victory.

It has to be remembered that in the last twelve games Armagh have only won two. By far this was the most memorable from Armagh’s point of view. Some of the new found team spirit and resolution must be down to the recent team bonding experienced on the French tour.

Coach aims high for next season

After another 6th place finish in the AIL the club was forced  to readdress our strategy and identify the areas which needed improvement  if the club were to make any serious attempt for promotion. The playing squad had to be increased to deal with the demands of the Ulster Bank All Ireland League.

A large emphasis was put on a recruitment drive by coaches and committee members alike resulting in the addition of some great talent to the club from around the province.

What we have assembled is probably the strongest squad of players in my time at the club, and a group of players who now have the experience of what it takes to play and win in the AIL.

Our first goal is to improve. Each year we have made small steps forward, whether it be matches won in the ail or total points scored.

This year had to be the same. If we are setting an ultimate goal then it would have to be promotion along with establishing a strong 2xv as without the strength in depth, competition for positions and players pushing each other, we, as a club will never fulfil our true potential.