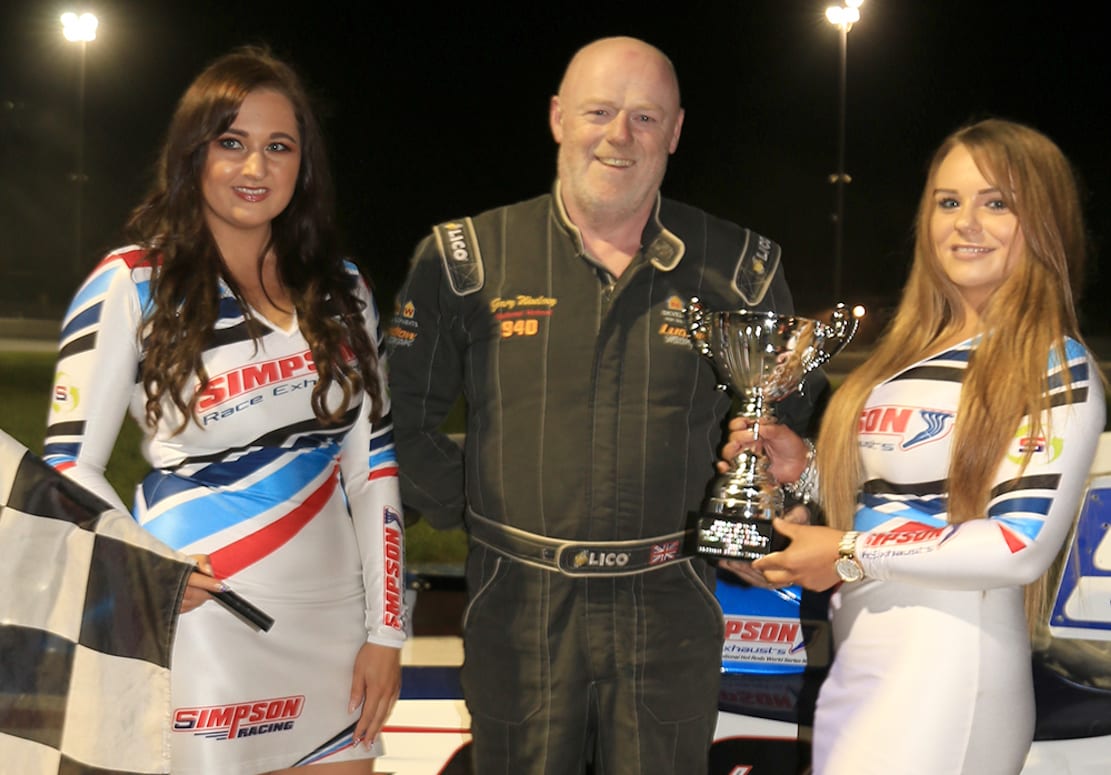 Portadown’s Gary Woolsey was the toast of Tullyroan Oval on Saturday night when he scooped the honours in Round 4 of the Simpson Race Exhausts World Series NI for National Hot Rods.

The other feature race wins at the McElmeel Mobility Group meeting fell to Stephen Stewart in the Superstox and young Max Hobson who completed a hat-trick to win the Ninja Karts Tullyroan Challenge Cup.

Seventeen National Hot Rods came to grid for the fourth round of Simpson Race Exhausts World Series NI, with the locals joined by English Series regular Bradley Dynes who was making a welcome trip back to his old stomping ground.

Kenny McCann and Andrew Stewart disputed the early heat one lead, before losing out to Podge McQuaid. He though had no answer to the flying Shane Murray who stormed past to take the win over Carl Sloan and Keith Martin. Stewart went out front in heat two, with Simon Kennedy this time chasing hard in second.

Gary Woolsey was making strides towards the front, relegating Kennedy to go second and bearing down on Stewart as the laps dwindled down.

Stewart held on though for the win, with Woolsey and Kennedy completing the top three.

Murray had annexed pole position for the final, and quickly settled in to the lead ahead of Woolsey and Ulster Champion Glenn Bell. However only five laps in Murray ground to a halt on the Annaghmore Bend with mechanical issues, gifting the lead to Woolsey. Gary spent the rest of the race under pressure from Bell, but he was equal to it all and took the chequered flag to record a satisfying win.

Bell, Derek Martin and Sloan were next home ahead of NI Champion Adam Hylands after what was a very fraught race in the midst of the pack.

The Lightning Rods contested two more qualifying heats before the Grand Final of the 2ke Engineering Challenge Series, with last week’s final winner Dermot Tynan the first to show in the opening heat before losing out to Dylan McCann.

The whole pack closed together as they headed into the final laps, with Martin O’Flaherty looking around the outside of the leader and Stephen Hollywood trying to get inside him at the same time! Hollywood and McCann tripped over each
other which opened the way for O’Flaherty to claim the win, his first since rejoining the formula only a few weeks ago having been working abroad for some time.

Tim Hazlett and Ricky Shaw completed the top three. Tynan again led for much of the second heat, with Vince Litter this time chasing him hard as they raced towards the chequered flag. Litter got a superb run on the outside line on the final lap, just pipping Tynan by the closest of margins to take the win, with Jordan Rochford in third.

The 2ke Engineering Challenge Series Grand Final was lined up on aggregate points from across the series, which handed Rochford pole position ahead of Mark Corry and Shaw. Rochford quickly stamped his authority on proceedings and pulled clear, as a huge scrap developed for second between Corry, Hazlett and Shaw. Corry was fighting a great rearguard action to keep the rest at bay, and even attracted attention from Race Control to tidy his racing line.

Shaw took the bull by the horns and went for a great outside run over the final two laps, just failing to grab second by the slenderest of margins.

Rochford meanwhile was well down the road, claiming an utterly dominant series win by some distance after a sublime performance. He took the trophy and two race tyres courtesy of the series sponsors, with Corry and Shaw completing the podium.

Welcome Scottish visitor Chris Hay joined the healthy grid of local Superstox for the second round of the NIOvalTV Series, and their final outing before the World Championship is staged at Tullyroan later in the month. Paddy Murphy set the pace from the white grade in the opening heat, leading until well after half distance when Portadown’s Stephen Stewart zipped past to take the victory over Cyril Hawe and Keith McAreavey.

Murphy and fellow white grader Brian Lammey held sway out front for some time in the second heat, before this time star man Lee Davison hit the front late on.

Lee even survived a late race caution to take the win over Stewart and Kyle Beattie.

McAreavey led the feature final for some distance, with Stewart and Davison closing in late on to set up a grandstand finish. Davison hit trouble and retired with just five laps to go, leaving the way clear for Stewart to hit the front and take a decisive victory and earn himself a rise to the red grade for the next meeting. McAreavey was great value in second ahead of Sean Mark in third.

The ProStocks were contesting the Grand Final of the McElmeel Mobility Services Supreme Series, and Bushmills man Dylan Booth took the flag in the opener before being excluded in post race scrutineering for a minor technical infringement. That handed the win to British Champion Dan Shannon over Norman Purdy, before Booth righted his wrong by taking victory in heat two. This time there were no drama at the post race checks, and he held onto the win ahead of Purdy and Steven Haugh.

Joe Largey and Shannon shared the front row for the final courtesy of the aggregate series points scoring, with Largey breaking clear early on before being reeled in by Shannon and Haugh. They both quickly found a way past before Largey spun out of contention. Shannon held on to record yet another title win and with it two new tyres from the series sponsors, with Haugh a gallant runner up.

William McFaul claimed third after being caught up in a last lap melee that saw Mark McLaughlin and Purdy lose out.

The Ninja Karts Tullyroan Challenge Cup was dominated by young Portadown starlet Max Hobson as he claimed victory in both heats and the final. Leyton Hughes and Lexi Crooks contested the lead in the opening heat, before Hobson arrived from the red grade to slip around the outside to take the win over Hughes and Crooks. Lauren Berry was chasing hard after Hughes and Crooks in heat two, but neither of the three had an answer to Hobson’s pace as he again roared by to take the win over Berry and Lacey Bevan.

From pole position Hobson was never challenged in the Tullyroan Challenge Cup final, that despite losing the lead off the line to Berry. As Hobson made the race his own with a dominant performance Bevan made a great outside pass on Berry nearing the end to take a very creditable second spot, with Lauren completing the podium in third.