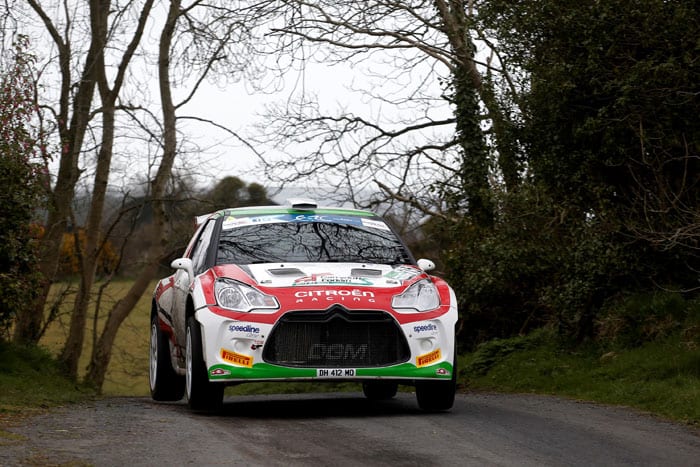 Top rally drivers from as far afield as China and Australia are gearing up for this year’s 85th Circuit of Ireland Rally which takes place 7-9 April.

Organisers of the Circuit are looking forward to an even bigger and better event when this year’s international rally rolls into Belfast and other spectacular locations throughout Northern Ireland. Belfast will host the Rally HQ and Service Park with the King’s Hall complex welcoming competitors, team personnel, fans and visitors from over 20 nations from Wednesday 6th April.

Fans will have several opportunities to see the rally action from Thursday 7th to Saturday 9th April. The Qualifying Stage of the rally will be based at Antrim Castle Gardens on Thursday 7th April in the afternoon, followed by a Ceremonial Start outside the Irish Linen Centre and Lisburn Museum from 6.30pm with special guest Louis Walsh. Entertainment in Lisburn City Centre in the evening includes a free concert from 8.30pm with local star singer Flash Harry.

Friday 8th April features rural stages close to Larne and Ballymena and includes a refuel halt at the famous Ballymena Showgrounds. Friday’s route includes stunning stages in the Causeway Coast and Glens region encompassing Torr Head and Glendun as well as a passage control at the Dark Hedges and a regroup at Bushmills Distillery.

A special Ards TT Stage will take place in Newtownards town centre on Friday evening 8th April. Competitive rallying on the Saturday will include stages close to Banbridge, Ballynahinch and Dromore with town centre regroups in Downpatrick and Banbridge.

The rally will finish back in Belfast on the evening of Saturday April 9th and will culminate in a special closing ceremony outside Queen’s University when the 2016 winners will be presented with the famous historic Circuit of Ireland trophy.

2015 was a hugely successful year with spectator numbers increasing by 7% to 78,000 and organisers anticipate another fabulous event with 2016 marking the 85th year of this iconic and popular family motorsport festival.

Event director Bobby Willis said, “Last year 40 million viewers across the world watched our fabulous scenery on Eurosport. It’s incredible how the rally has grown over the past decade to become one of the iconic events of Europe again.

“I’m especially thrilled with the strength and breadth of this year’s entry which includes last year’s winner Waterford’s Craig Breen back to defend his title. It’s fantastic exposure for Northern Ireland and we’re looking forward to an exceptional competitor line-up on 7-9 April.”

Also competing are, reigning European champion Kajetan Kajetanowicz, Alexey Lukyanuk, leader of this year’s ERC series, as well as the leaders of the British and Irish Tarmac championships, Elfyn Evans and Keith Cronin. Information regarding this year’s Circuit of Ireland Rally

Approximate times shown below are for the first car due. The convoy then takes around 2½ hours, with cars passing roughly every minute.