New season kicked off at Tullyroan on Saturday 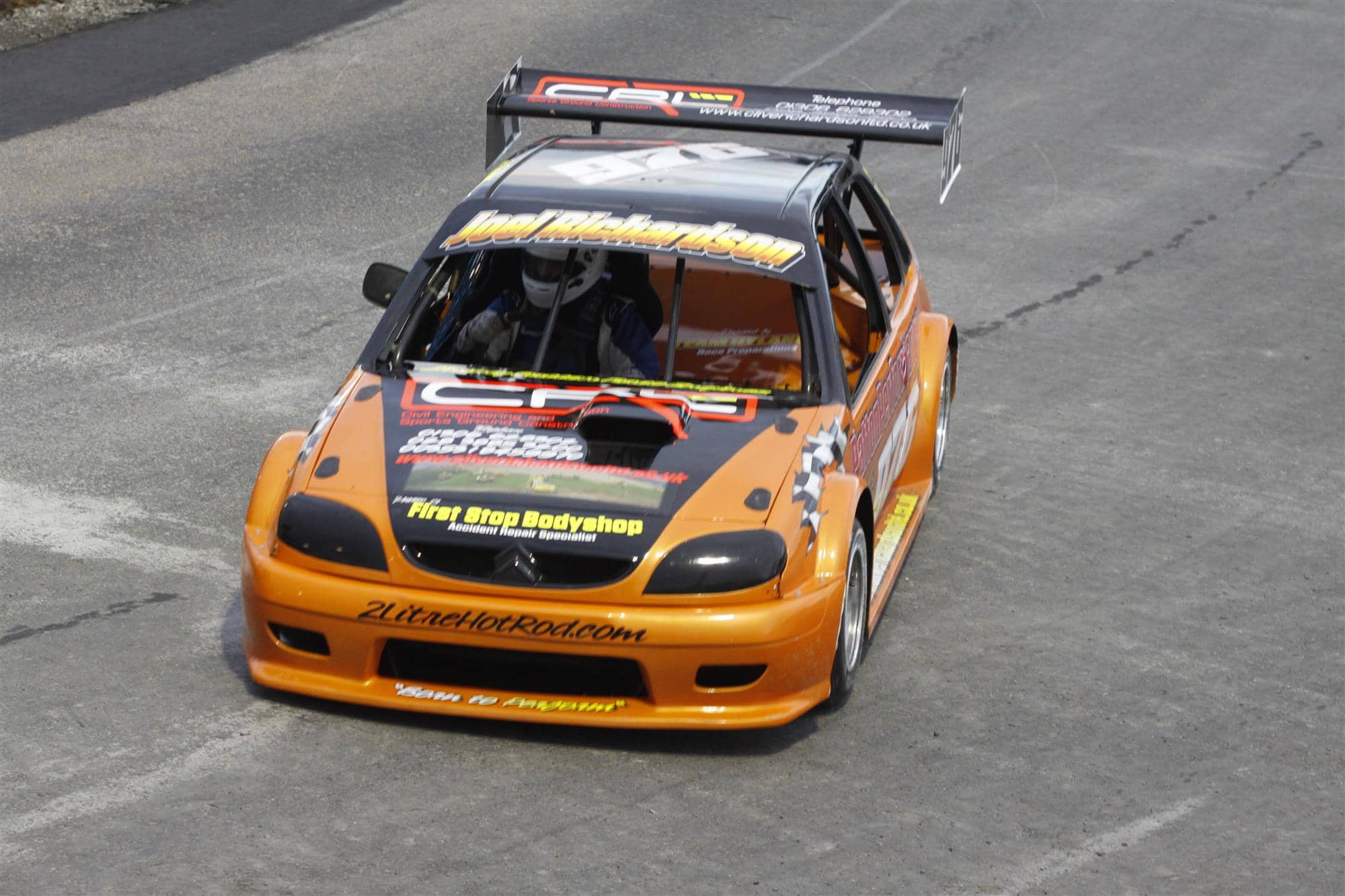 Just The Job For Joel!

The new racing season kicked off in style at Tullyroan Oval on Saturday night, with a frantic evening of top quality racing action across five classes. Local Annaghmore driver Joel Richardson was the toast of the 2.0 Hot Rods, as he went through the card unbeaten with victories in both heats and the final. There were other feature race trophy wins for Gary Beggs in the Lightning Rods, Micky McFall in the Stock Rods and Jeff Minish in the Superstox, whilst Scottish youngster Keir Millar was the class of the Ninja Karts field with a great drive to victory.

A healthy field of 2.0 Hot Rods arrived to do battle at the start of the 2014 season which will see the World Championship staged at Tullyroan in July. Unfortunately a number failed to make it through practice, although we still had sixteen cars in action. Richardson set off like a hare from the novice grade in heat one, and soon built a commanding lead. Former Lightning Rods multi-champion Stephen Emerson eventually got the better of a great tussle with Thomas Dilly to grab second, as Richardson took his first win in the formula. Further back National and Irish Champion Adam Hylands fell foul of the Steward as he was disqualified for an incident which saw Adam Heatrick spin out of contention.

Richardson again made no mistake in heat two, once again leading from flag to flag. World and British Champion Shane Murray stormed through to second ahead of Mark Madill’s impressive new Citroen Saxo. This time Heatrick tasted disqualification, as he and Hylands controversially tangled yet again.

An automatic graduation to the yellow grade following his brace of heat wins failed to deter Richardson in the final. He quickly settled into the lead and mastered the wet conditions to round out his hat-trick in fine fashion. Emerson came through to second once again, with Madill marking himself down as a real force for 2014 in third.

Scott Cochrane quickly relieved early pacesetter Mark Corry of the lead in the opening Lightning Rods heat of the night, with Scott then easing clear to a comfortable win. Aaron Stewart and former Irish Champion Jordan Rochford filled the podium places behind the Portadown man.

In only his second meeting in the formula, Stephen Hollywood set quite a pace in the damp heat two, before finally being overhauled just three laps from home. The man on a charge was Norman Purdy, and the former ProStocks man slipped ahead in his ex-Richard Stewart car to take a pleasing win. Hollywood held on for second ahead of Irish Champion Gordy McKee.

Hollywood set the early pace in the rain sodden final, before Purdy again surged into the lead at quarter distance. This time though star man and ORCi Champion Gary Beggs was the man to watch, and despite Purdy’s best efforts he just couldn’t hold off the Carrickfergus wet weather specialist. Beggs swept home to a popular victory, and will now have his sights on the World Championship at Cowdenbeath next month, the scene of his ORCi title win last year. Aaron Stewart and Hollywood filled the podium places.

One of the drives of the night came from Stevie McNiece in the opening Stock Rod heat, as he cut through from dead last to take the flag after a scintillating drive. Ballymena duo Victor McAfee and Chris Gordon chased him home. The action was closer than close all evening between a whole host of cars, although McNiece again powered home in heat two to make it a double ahead of former National Champion Micky McFall and Gordon.

With conditions at their worst for the final, McFall was the master of the wet track as he slipped ahead after early leaders Gordon and Ben McCully clashed. McNiece tried his best to get on terms with McFall, but lost a place to McAfee. Despite Victor chasing hard and closing the gap, McFall was not to be denied as he took the chequered flag and the first silverware of the new campaign.

The open wheeled Superstox were missing a few expected entries but an impressive fourteen cars still came to the grid. Local driver Jack Gilpin took the first heat victory ahead of Nathan Beattie, who crossed the line backwards following a spin. Beattie made no mistake in heat two as he powered to the win, with Denver Grattan the runner up in this one.

The heavens had opened by final time, and after not figuring in the heats it was Jeff Minish who was in a class of his own. From the blue grade he wasted little time in hitting the front, and splashed through the puddles to take the trophy is his luminous orange machine. Jeff even celebrated by pirouetting through 360 degrees as he took the flag!! Denver and Gary Grattan were the placemen after a fine evening’s entertainment from the Supers.

The young stars of tomorrow in the Ninja Karts for the 6-11 year olds had a huge field on hand, bolstered by welcome Scottish visitors Keir Millar, Charlie Henry and David Sinclair. Recent newcomer Joel McPeake showed some great speed to lead most of the way in heat one, only to be denied victory by Adam McFall in a photo finish. McPeake again was the first to show in heat two, before Matthew Nicholl stormed through to the win over McFall and Irish Champ Niall Cregan.

The final had its fair share of incidents, with a number of race stoppages along the way. Mark Crawford and Jack Hazlett thankfully walked away unscathed from a huge accident on turn four, before favourites McFall, Nicholl and Shea Fegan also crashed out. That allowed Keir Millar to make his trip across the Irish Sea worthwhile as he charged to victory lane, just holding off Cregan and Adam Weir at the chequered flag.

Racing continues at Tullyroan Oval this Saturday night, April 12th, when the elite National Hot Rods are the headline attraction in their latest World Championship qualifying round. ProStocks, Ninja Karts, Junior Productions and Reliant Robins complete the line up, with the first race leaving the grid at 6.30pm.